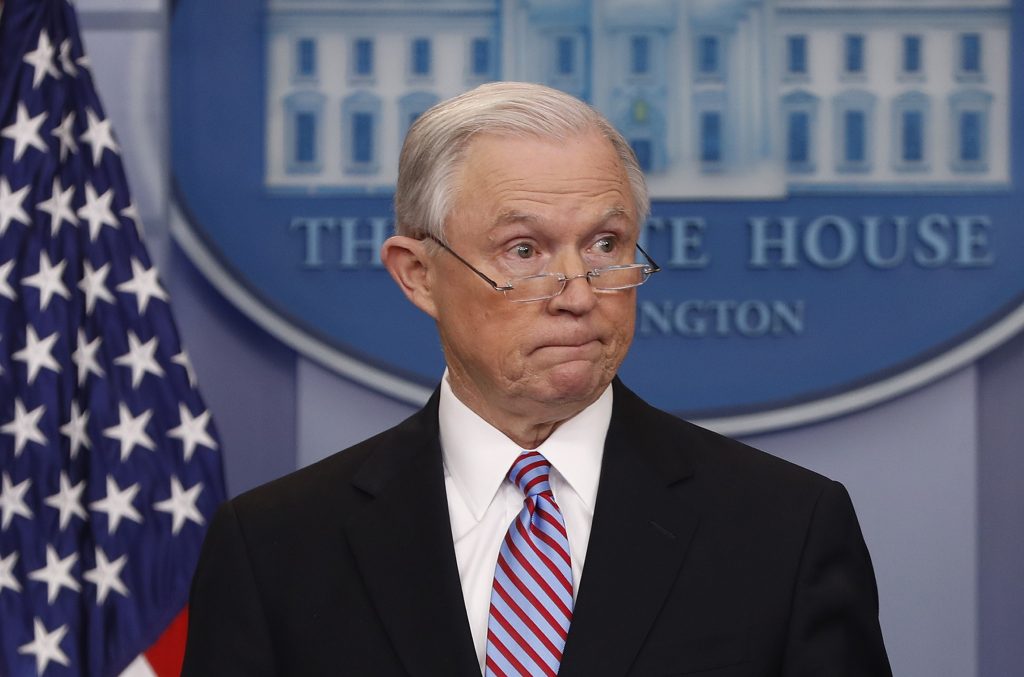 Attorney General Jeff Sessions has resigned, ending a tortured relationship with President Donald Trump and opening what could be a historic fight over the sprawling criminal investigation that has clouded his White House tenure.

In a letter delivered to the White House, Sessions wrote that he was submitting his resignation at the request of Trump, who has been highly critical of his attorney general since Sessions recused himself last year from overseeing investigation into Russia’s interference in the 2016 election.

Sessions wrote that he had been honored to serve as attorney general and sought to uphold the rule of law. “I came to work at the Department of Justice everyday determined to do my duty and serve my country,” he wrote. “I have done so to the best of my ability.”

Trump long had wanted Sessions gone but resisted forcing him out until after the midterm election. Sessions’ resignation almost certainly got ahead of his being fired by the president.

With Sessions out, Trump may attempt to limit or end the probe led by special counsel Robert Mueller III into Russian interference in the 2016 campaign and whether the president himself obstructed justice.

A new attorney general could take control of the criminal probe, which has already led to guilty pleas from several of Trump’s former top aides, and restrict its budget or scope.

During his time in office, Sessions had sought to carry out the president’s agenda despite their toxic relationship, steering the Justice Department to tougher policies on violent crime, drug trafficking and immigration.

Sessions endured months of humiliating criticism from the president, who publicly accused his attorney general of disloyalty and weakness, and privately mocked him.

On Aug. 23, for example, Trump complained on Fox News that Sessions “never took control of the Justice Department” and said he only nominated him as the nation’s top lawman because “he was an original supporter” of Trump’s insurgent campaign. “What kind of man is this?” he asked angrily.

Sessions signaled he had no intention of stepping down voluntarily, however, and pushed back at Trump with public statements that asserted the traditional independence of the Justice Department.

The department’s actions “will not be improperly influenced by political considerations,” Sessions responded after Trump’s Fox News interview. He repeatedly resisted the president’s calls to launch prosecutions of Hillary Clinton and other political opponents.

But the former four-term U.S. senator from Alabama saw his support soften among key Republicans on Capitol Hill in recent months. That gave Trump an opening to remove him and potentially assert more control over the Russia investigation that he has condemned as a “witch hunt.”

The president has repeatedly insisted there was “no collusion” between his 2016 campaign and Moscow’s effort to steer the election in his favor through computer hacking, social media posts and other tactics.

Although no Americans have been charged with conspiring with the Russian intelligence operation, the criminal probe has dug deep into Trump’s inner circle.

Firing Sessions could create even greater jeopardy for the president, however. Mueller has sought to determine if Trump improperly tried to obstruct the investigation, an offense that was included in impeachment proceedings for Presidents Richard Nixon and Bill Clinton.

One episode already under scrutiny is Trump’s dismissal of FBI Director James B. Comey in May 2017, a decision the president himself attributed to frustration over the Russia probe. Removing Sessions could fall into the same category.

The long-expected firing of the attorney general is a remarkable end to a key political alliance.

An archconservative, Sessions was the first member of the U.S. Senate to throw his support behind Trump’s unlikely presidential bid, and he helped shape the anti-immigration, tough-on-crime message that helped propel the businessman celebrity into the White House. Trump named him to lead the Justice Department after the election.

But their relationship evaporated after Sessions, on advice from Justice Department ethics lawyers, recused himself from the Russia probe shortly after he was confirmed by the Senate in February 2017. Sessions had failed to tell his confirmation hearing about his own meetings with a Russian diplomat during the campaign, sparking concerns about his candor.

In response to a question by then-Sen. Al Franken, Sessions said he “did not have communications” with Russians. He later admitted that he spoke at least three times with Sergey Kislyak, then the Russian ambassador, during the campaign.

In two other congressional hearings, Sessions tried to explain himself but fumbled as he gave answers that some lawmakers considered misleading. The FBI reportedly investigated him for making false statements to Congress, but his personal lawyer said the probe was dropped after Sessions was interviewed by the special counsel’s office.

Once Sessions recused himself, the investigation was put under Rod Rosenstein, the deputy attorney general and a career Justice Department official. After Trump fired Comey, Rosenstein appointed Mueller as special counsel in an effort to guarantee his independence.

Trump has publicly blasted Sessions ever since, apparently viewing Sessions’ recusal as a personal betrayal.

As Trump continued to rail against the Mueller probe, Sessions’ position seemed ever more tenuous. Trump even mocked Sessions’ claims of political independence at the Justice Department.

“Jeff Sessions said he wouldn’t allow politics to influence him only because he doesn’t understand what is happening underneath his command position,” Trump tweeted on Aug. 25.

The president repeatedly showed no compunction about urging Sessions to take politics into account when making criminal justice decisions, notably when he grumbled about cases against two Republican congressmen, Chris Collins of New York and Duncan Hunter of California.

“Two easy wins now in doubt because there is not enough time (before the midterm elections),” Trump tweeted on Sept. 2. He added sarcastically, “Good job Jeff.”

Some Republican senators signaled they were open to considering a replacement as Trump ramped up his invective.

Sen. Lindsey Graham (R-S.C.), who said last year there would be [problems]if Sessions were fired, recently said he “is not the only man in the country who can be attorney general.”

“We need an attorney general that can work with the president,” Graham told NBC News.

Senate Majority Leader Mitch McConnell (R-Ky.), remained a staunch supporter of Sessions, telling reporters, “He ought to stay exactly where he is.”

That sentiment could mean a tough road ahead as Trump tries to find a nominee who can survive the Senate confirmation process. Many Republicans are unhappy with Trump’s harsh treatment of their former colleagues, and Democrats — who are sharply critical of Sessions’ policies — are likely to stick up for his integrity.

During his tenure, Sessions pushed the Justice Department to adopt tougher policies on violent crime, drug trafficking and immigration enforcement, issues he previously had championed in the Senate.

Bucking a bipartisan trend to support less harsh tactics for drug offenders, Sessions instructed federal prosecutors to file the most serious charges possible, and to seek the death penalty when appropriate. He moved to pull back on the department’s work on reforming abusive police departments.

A longtime Senate hard-liner on immigration, Sessions also was an enthusiastic backer of Trump’s crackdown on illegal immigration, supporting workplace raids deep in the country to arrest and deport people without proper documentation.

Sessions denounced sanctuary cities that refused to cooperate with immigration agents. He pushed to strip the communities of federal law enforcement grants, threatened to investigate recalcitrant city officials for crimes, and filed a suit to overturn California’s sanctuary policies.