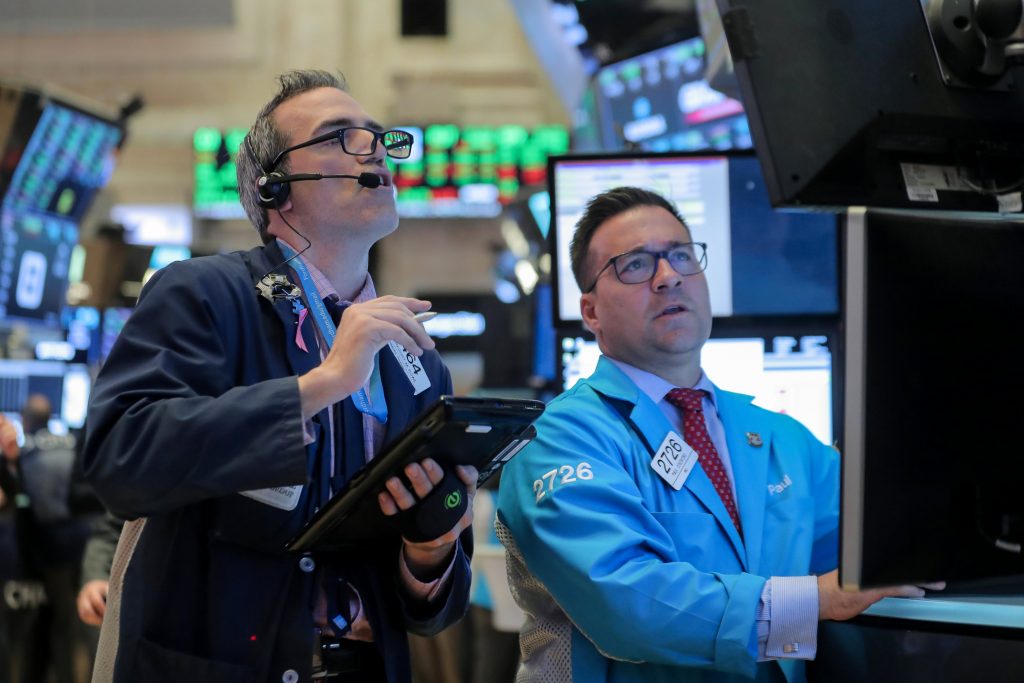 U.S. stocks are mostly higher Monday as Warren Buffett’s Berkshire Hathaway leads gains in financial companies, while energy companies rise along with the prices of oil and natural gas.

Technology and internet companies continue to struggle as Apple drops again. Asian indexes fell following weak economic data in China and a lack of progress in trade negotiations between the U.S. and China.

Last week was the market’s best week since March. That came after a steep drop in October.

Both of those indexes were hit hard during the market’s slump last month and are far from the highs they set in late August. Technology companies fell as investors worried about the trade dispute and about an increase in interest rates, which could erode the future profits of those companies. Smaller companies are vulnerable to higher interest rates because they tend to carry more debt. They also face slower earnings growth next year after the big cut in corporate taxes at the end of 2017.

BANK ON BUFFETT: Warren Buffett’s Berkshire Hathaway conglomerate said its profit quadrupled in the third quarter as the value of its investments climbed. It also reported better results from its insurance and railroad divisions. Berkshire also bought back almost $1 billion in stock, the most in years. Its Class B stock climbed 4.6 percent to $216.16.

Other financial companies also rose. Insurer MetLife gained 2.2 percent to $44.12 and Citigroup picked up 2 percent to $67.22.

TRIAL DATA: Eli Lilly picked up 4.4 percent to $111.40 after the company said patients who took its type 2 diabetes drug Trulicity were less likely to have a heart attack or other major heart problems during a clinical trial. The study compared Trulicity, an injection given once a week, to standard treatments.

Natural gas soared 6.9 percent to $3.51 per 1,000 cubic feet following forecasts for cold weather in the next few days. Natural gas is primarily used to heat homes and its price often surges when investors expect a cold snap.

APPLE FALLS FAR: Apple fell another 3.1 percent to $200.99. On Friday it tumbled to its biggest loss in almost five years after the tech giant gave a weak fourth-quarter forecast and said it will stop announcing how many iPhones it sold each quarter.

Daniel Ives of Wedbush said Apple made its announcement appear “flippant,” but it’s actually part of a carefully calculated strategy intended to get investors to see the company as a services provider and not just a device seller. He rates Apple stock “Outperform” with a price target of $310 a share.

Other technology and internet companies also struggled, as they did throughout October. Video game maker Activision Blizzard shed 6.1 percent to $64.81 and chipmaker Nvidia fell 4 percent to $206.36. Google’s parent company, Alphabet, skidded 3.3 percent to $1,036.

Those indexes rose even though the office of British Prime Minister Theresa May dismissed reports the country is close to reaching a divorce agreement with the European Union. Officials have said negotiators are on the brink of a deal, which could be reached this month.

U.S.-CHINA TRADE: Chinese President Xi Jinping Xi promised Monday to reduce costs for importers and raise consumer spending power, but he did not address the dispute between the U.S. and China. Global markets, especially in Asia, had risen Friday after Chinese officials and President Donald Trump said a phone conversation between the two leaders had gone well. But fears resurfaced that the bullish talk might have been aimed at scoring political points just ahead of U.S. midterm elections.