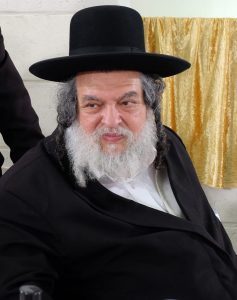 Chassidei Ger were joined by residents of Yerushalayim and worldwide Jewry in mourning the petirah of the prominent chassid and menahel of Seminar HaYashan, Harav Chanoch Simcha Binem Hakohen Levin Z”l.

Before WWII, Harav Pinye was a brother in law with the Beis Yisrael zy”a, as they were married to sisters. Both of their wives perished during the war, and Harav Pinye married his cousin after the war ended. As their ben yachid, Chanoch Simcha Binem, named for his grandfathers, was viewed by his parents as a consolation for the terrible tragedy they experienced. They kept a watchful eye over him as they raised him with devotion and love.

As he entered Shiloh, the cheder where he spent his younger years, his friends realized that it was beneficial to be associated with Binem. When his parents bought him new shoes, they made sure to buy two pairs and gift one to an orphan in need of shoes of his own. New Shabbos clothing were purchased in duplicate so that an indigent friend of Binem would get a much needed new set of clothing to enhance his own Shabbos.

As he matured, he transferred to Yeshivas Imrei Emes in Bnei Brak, and then to Yeshivas Sfas Emes in Yerushalayim. This was the start of a new chapter in his life, as he gained entry to the inner circle of the Gerrer Rebbe the Bais Yisrael zy”a. As the child born to his elderly parents after they survived the holocaust, the Rebbe showered him with special attention, referring to him as “my Binem’l”. In his extended talks with the Rebbe, he was guided in all aspects of his life, a closeness rarely seen by others during this period. Indeed, when he recited birchas kohanim, his place was directly in front of the Rebbe.

In 1973, he married the daughter of Reb Itche Yoskovitz, one of the leaders of the rebuilding of Ger in America. They established their home in the immediate vicinity of the main beis medrash of Ger and remained under the watchful eye of the Rebbe. He rose early each morning to learn and daven in Ger, and was present whenever the Rebbe spoke, never missing to imbibe in his every nuance. The devotion of his wife enabled him to dedicate himself to his avodas hakodesh throughout his life.

In 1978, he began assisting his father in the administration of Seminar HaYashan, the seminary which educated thousands of girls since its inception. For the next forty years, he guided the seminary which produced generations of Jewish daughters and mothers devoted to the ethos of Bais Yaakov. In addition, he instituted the mainstreaming of Special Education students in classes. The model developed in “Seminar Harav Levin” was accepted in many chinuch mosdos, which helped change the landscape of Special Education throughout the country.

In his work in the seminary, Rav Levin remained resolute in his commitment to educate the students with the purity of a bas Yisrael, yet still managed to exhibit warmth and kind-heartedness to each worker, orphan, and individual student. He was viewed as the exemplar of a combination of undiluted yiras shamayim together with fiery ahavas Yisrael which united him with others.

In his drashos on the parshah and by mass gatherings, he was known to inspire his listeners with concepts and ideas which he had heard personally from Gedolei Yisrael. Rav Binem’s contagious joy together with the myriad stories he told of tzaddikim and early chassidim endeared him to all who came in contact with him. At his table, the downtrodden sat next to well-known talmidei chachomim and respected chassidim as they sang zemiros together and absorbed from the encouragement that he dispensed, which had them returning time and again be uplifted in his presence.

Two months ago, Rav Binem suddenly took ill, and was hospitalized in serious condition. His recovery was short-lived, and he was niftar this past Shabbos while surrounded by his family. At the lavayah, Hagaon Harav Shaul Alter shlit”a noted, “Although many were close to the Bais Yisrael, the attachment that Rav Binem enjoyed was unparalleled. The Rebbe raised him as a son, and how they were bound with one another’s spirit. Indeed, he was ‘ah Beis Yisroel’s ah kind’ (the Beis Yisroel’s child).

The procession continued to the Gerrer Bais Medrash, where the Gerrer Rebbe shlit”a joined and followed the aron until the gate of the bais hachaim in Sanhedria. His close friend, Reb Mordechai Shmuel Rushetzsky, described how Rav Binem would stretch out the last word of birchas kohanim each day, as per the custom of the Bendiner Rov. He once explained that during these few seconds, he would have in mind the many people who needed a salvation and would daven on their behalf.