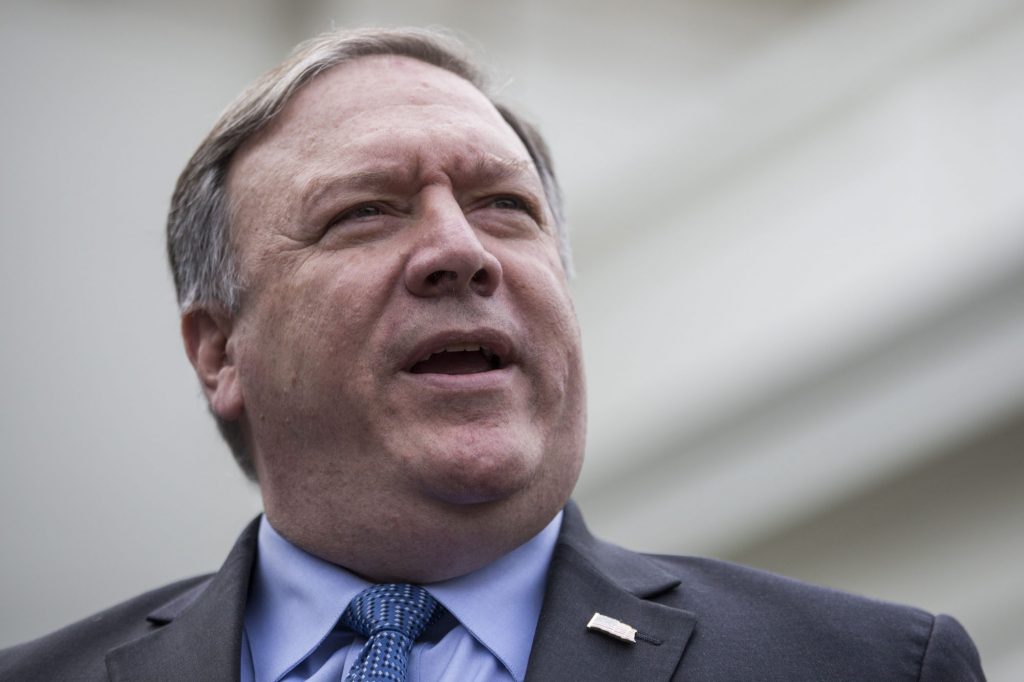 Secretary of State Mike Pompeo predicted Sunday that the remaining sanctions against Iran that resume Monday will change the Tehran government’s behavior in the region.

Speaking Sunday on Fox News, Pompeo said the sanctions, the last ones to snap back after the U.S. withdrawal from the 2015 nuclear deal, aim to get Tehran to stop supporting militants in the Middle East, stop testing missiles and treat its own citizens with more respect. And he defended President Donald Trump’s tweet Friday featuring a “Game of Thrones”-inspired poster that warned: “Sanctions Are Coming.”

Asked what the administration would do if the Iranians restart their nuclear program, Pompeo replied, “We’re confident that Iranians will not make that decision.”

Sunday marks the end of a 180-day deadline the United States set before the second round of sanctions lifted under the 2015 deal were to resume. Although the sanctions are against the financial and shipping sectors, the most significant measures prohibit purchases of Iranian oil, which provides 80 percent of Tehran’s tax revenue.

Starting Monday, all countries and businesses that buy oil from Iran risk secondary sanctions from the United States, and the administration has vowed to pursue offenders aggressively. Virtually all multinational companies that had started doing business in Iran after sanctions were suspended in 2016 have pulled out. That has helped send the Iranian rial plummeting and hurt ordinary Iranians amid spiraling prices for basic goods.

But only a handful of countries support the U.S. action, and Iranian officials have said that the re-imposed sanctions underscore how isolated the United States is. Many Middle East analysts also are skeptical that Iran will change its behavior in any way, in a show of defiance.

On “Fox News Sunday,” Pompeo defended the administration’s decision to grant temporary waivers on oil sanctions to eight nations, including some of Iran’s biggest oil customers.

The secretary of state has not named the countries, though Turkey has said it has received notice and is among them. China, South Korea, Japan and India also are expected to get waivers. Pompeo said all had made significant reductions in their Iran oil purchases already but “need a little bit more time to get to zero.”

Pompeo also said the troops going to the southern U.S. border are intended to keep a caravan of migrants from entering the country illegally, but he suggested the migrants may be allowed to enter if they apply through the proper channels.

“If they want to come here lawfully, that’s the American tradition, it’s the American way,” he said on CBS News’ “Face the Nation.” “We continue to be the most generous nation in the world with respect to immigration. But illegal immigration will not be permitted.”

He also said the United States is still seeking to identify everyone involved in the killing of Washington Post contributing columnist Jamal Khashoggi, who was killed last month in the Saudi Consulate in Istanbul. But he also said the incident will not be allowed to harm U.S.-Saudi relations.

“We’re working with the Turkish government, with the Saudi government and with anyone else who has relevant facts for us to be able to determine all of those who were responsible for this atrocious murder of Jamal Khashoggi, which the Saudis themselves have acknowledged was premeditated,” he said. “We need to get to the bottom of it. We need to find out who was responsible, hold them accountable.

“And do all of this while protecting enormously important strategic interests that the United States maintains with the kingdom of Saudi Arabia.”

Asked what the administration will do if Crown Prince Mohammed bin Sultan is found to have ordered Khashoggi’s killing, Pompeo said, “We are going to chase the facts wherever they go, and we hold accountable each of those who we find responsible.”