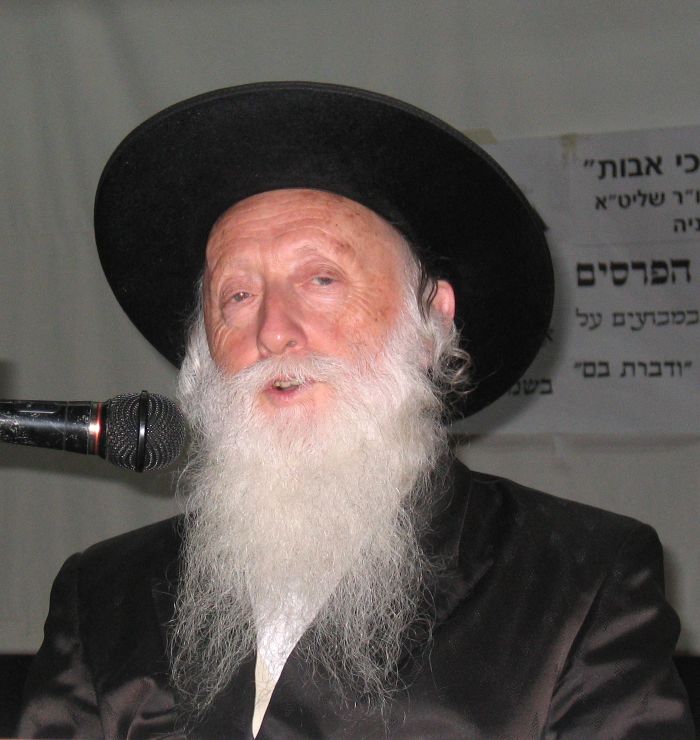 Talmidim of Yeshivas Sanz in Netanya were joined by the world of Torah and Chassidus in mourning the passing of Harav Eliyahu Shmuel Schmerler, zt”l, who passed away Leil Shabbos in Haifa at the age of 88.

Harav Schmerler stood at the helm of Yeshivas Sanz for over half a century, faithfully carrying out the ideals and wishes of the Rebbes of Sanz-Klausenberg, Harav Yekusiel Yehudah Halberstam, zy”a, and, ybl”c, his son Harav Tzvi Elimelech, shlita. Over the decades in which he served as Rosh Yeshivah, he molded thousands of talmidim with his shiurim which he delivered in many areas of Torah, both in Gemara and Chassidus.

Harav Schmerler was born in Vienna in 5791/1930, where his parents moved from Tzfas at the onset of WW I, due to the shortage of food in Eretz Yisrael. His father, Reb Yaakov Yisrael, z”l, was a descendant of the Noam Elimelech and Harav Meir of Premishlan zy”a, and his mother was a daughter of Harav Eliyahu Shmuel Vind of Bubrika, z”l.

In 1933, the family returned to Eretz Yisrael and settled in Yerushalayim, where he joined other Sanzer Chassidim in the beis medrash of Oshpitzin, where Reb Yaakov Yisrael served as the baal tefillah. His tearful tefillos were remembered by the elderly Yidden of Yerushalayim for their warmth and passion. The young Eliyahu Shmuel imbibed this atmosphere of Torah and Chassidus in his formative years.

As a talmid of Yeshivas Chayei Olam, he developed a close relationship with the Tchebiner Rav, zy”a, who spend long hours relaying to him the main topics which he would discuss in his shiurim. In one such discussion, the Tchebiner Rav mentioned a question raised by the Divrei Chaim concerning Chanukah. At the conclusion of their talk, the Tchebiner Rav told him, “you are a Sanzer Chassid, and this piece will be of great benefit for you.”

Years later, when Harav Eliyahu Shmuel was listening to the Shefa Chaim’s pilpul one night of Chanukah, he recalled his discussion with the Tchebiner Rav, and realized that what the Rebbe said was not in accordance with the Divrei Chaim. In his humility, he whispered this to himself, and the Rebbe took notice of this. The Rebbe, who had the utmost deference for his ancestor, returned the next night and answered his question in another way which conformed with the Divrei Chaim, and thanked Harav Eliyahu Shmuel for pointing out the inconsistency. In response, he told the Rebbe the conversation he had with the Tchebiner Rav years before.

His attachment to the Shefa Chaim was legendary. While still a yungerman learning in Kollel Toras Emes, he would give shiurim to the chaburah of Chassidei Sanz, a group who were devoted to the Shefa Chaim. Although he had not yet visited Eretz Yisrael, the Shefa Chaim would periodically send written Torah essays, and the group waited anxiously to meet the Rebbe face to face.

In 1956, the Rebbe laid the cornerstone for Kiryat Sanz in Netanya, and requested that Harav Eliyahu Shmuel bring some exceptional bachurim from Yerushalayim to found the yeshivah in Kiryat Sanz. “The Rebbe wanted the first inhabitants of the kiryah to be the talmidim of the yeshivah,” said Harav Eliyahu Shmuel, “in keeping with the conduct of Yaakov Avinu, who sent Yehudah ahead to Mitzrayim to establish a yeshivah before the people arrived. This brought the success of the endeavor, since it was inaugurated with Torah first.”

Persuading fathers and mothers to send their sons to a desolate place was fraught with difficulty. To convince the parents, the Rosh Yeshivah had to guarantee the parents of the initial group that he was taking responsibility for them. True to his word, his greatness in Torah did not restrain him from lowering himself to the level of his talmidim to instruct them how to learn the Gemara and review the sugya until they was fluent, and show them how to learn the Rishonim and Acharonim, all in accordance to the directive he received from the Shefa Chaim.

For nearly 60 years, the Rosh Yeshivah led Yeshivas Sanz, where he began each day with a shiur in Be’er Mayim Chaim, in order to uplift the souls of his talmidim in preparation for the shiur iyun. He delivered both daily shiurim in which he trained his talmidim in the foundations and the fine points of learning the sugya, as well as the weekly shiur klali, which became the basis of his 25 sefarim known as Divrei Eliyahu. Through his sefarim, one gets a glimpse of the broad knowledge and brilliance of the author.

For decades, he produced talmidim who went on to accept posts as Rabbanim, Dayanim and Roshei Yeshivos, both in Eretz Yisrael and abroad. His students attest to his fidelity to the Rebbes of Sanz in educating young men as they grew in their learning and yiras Shamayim. He once stated, “If you were to cut my veins, it would not shed blood; rather, hot streams of Sanz would spurt forth.” He often stated that each and every word of the Rebbe had to be studied carefully, since they were well thought out before they were said. Harav Shmerler recorded many responsa of the Rebbe, and many discourses of the Rebbe were preserved for posterity through the writings of Harav Shmerler.

Several years ago, due to his weakness and ill health, he moved in with his son Harav Yitzchok Pesach to Haifa, where his holiness had a tremendous influence on the surrounding neighborhood. Despite his weakened state, he continued with his rigorous schedule of learning and avodas Hashem. On Thursday, he served as sandak by the bris of his great-grandchild in Bnei Brak.

At the conclusion of the Friday night seudah, he collapsed while holding the kos to begin bentching, as his neshamah returned to Shamayim. His levayah began in Haifa on Motzoei Shabbos, where his sons Harav Yitzchok Pesach and Harav Mordechai Tzvi said hespeidim by their home. At the beis medrash of Sanz in Haifa, some of his illustrious talmidim and other Gedolei Torah delivered tearful hespeidim. On Sunday afternoon, the levayah was held in Yeshivas Sanz, where he taught generations of talmidim for more than 60 years. Kevurah took place in the Sanzer chelkah, near the tziyun of the Shefa Chaim.