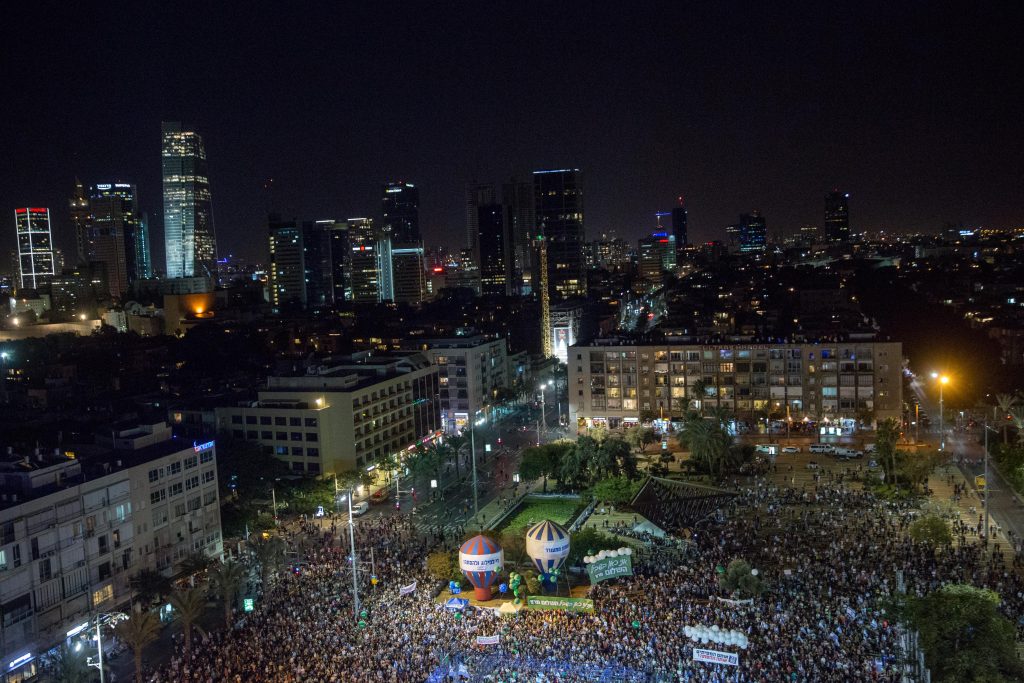 The response of large numbers of the crowd at this year’s rally in memory of former Prime Minister Yitzchak Rabin to a speech by government minister Tzachi Hanegbi was “saddening,” Prime Minister Binyamin Netanyahu said Motzoei Shabbos. “It’s a shame that they turned this event into a political one,” Netanyahu said. “Those who preach the loudest for freedom of expression are the ones who don’t allow others to talk when they disagree with them.”

In his own comments, Education Minister Naftali Bennett said “as leader of right-wingers who oppose a Palestinian state, I am tired of the false accusations of the left” regarding the murder of Rabin, which, he said, was not committed by “the right,” but by one individual – Yigal Amir. “The message of the left is – the right is to blame. My message is – no violence and no civil war. Israelis should choose.”

The organizers of the rally were determined to expand the footprint of the event to include Israelis beyond those of the left and center-left who usually attend the event, and to that end they invited Hanegbi. It’s likely, though, that they did not anticipate the remarks Hanegbi would make – or the reaction of many in the crowd of some 15,000 who attended the event at Rabin Square in Tel Aviv Motzoei Shabbos.

To the sounds of catcalls and boos throughout his speech, Hanegbi sought to differentiate between the memory of Rabin and the results of the Olso Accords that he signed. “The agreement signed in those days by the government, and approved by the Knesset, turned out to be a terrible mistake,” Hanegbi said. Regardless of that, “when the murderer committed his despicable act, I and many of my colleagues in my party felt the same way many Israelis on the other side of the political fence felt – pain and terrible suffering. If I had been there I would have gladly taken a bullet for Rabin. We must remember that we are brothers. That is the only way to keep our country together, the country Rabin fought to establish and defend. He was murdered for following his beliefs, a path I did not agree with.”

The organizers were harshly criticized in advance of the event for inviting Hanegbi. Meretz head Tamar Zandberg said that she would not have invited Hanegbi to speak. “The Likud was responsible for the incitement that led to Rabin’s murder, and even worse, it leads the incitement today against those in the ‘peace camp.’”

After the speech, Hanegbi told Channel Ten that he had “spoken from the heart to the people. I am happy I came. It was important for me to speak out about what I believe in on that platform without catering to what the crowd wanted to hear. I called for unifying the nation in my speech. The ongoing efforts to attribute to half of Israelis the action of one fanatic will not succeed. It’s a fact that Netanyahu was elected as prime minister a few months after the murder.”

Also getting a poor reception at the event was Yesh Atid head Yair Lapid, who was also booed when he spoke. Attempting to speak over catcalls and whistles, Lapid said that “what happened here 23 years ago was supposed to make us better people. If there is a trauma, we would hope to grow and develop from it. That did not happen, we are not better. The murder did not bring us together. Incitement is again a political tool, paranoia directs us. Everything has become black and white – us and them, good and bad. Hatred, fear and violence have become political tools,” he said.