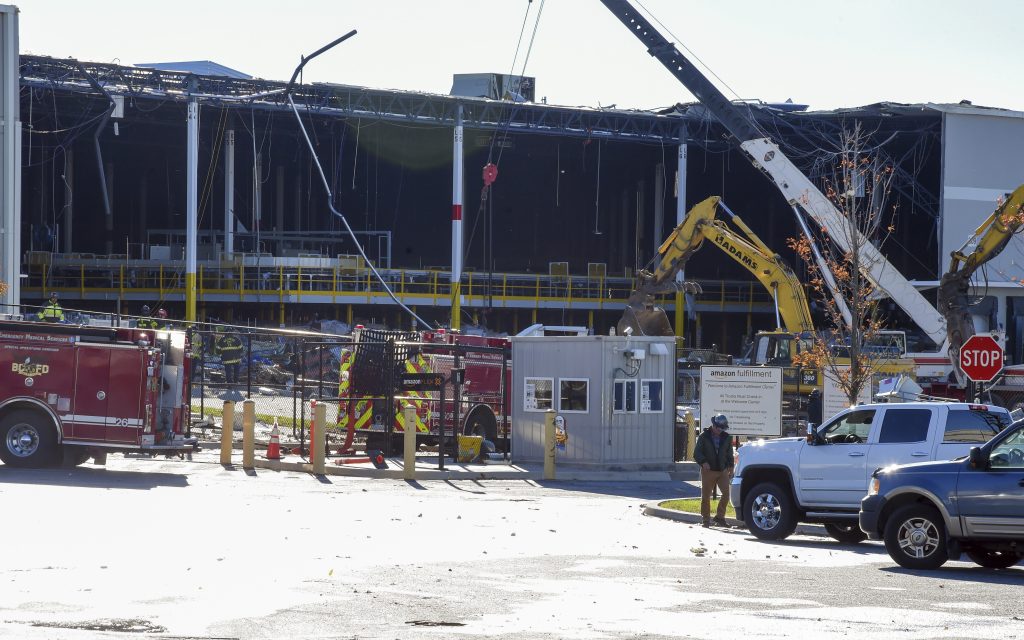 Friday night’s storm system produced an EF-1 tornado that touched down in Baltimore City and County, producing winds of over 100 mph and knocking down part of an Amazon.com warehouse, killing two people.

An EF-1 tornado on the Enhanced Fujita scale generally causes moderate damage. The scale goes from zero to five, with five causing the most destruction.

The twister cut a path 2 ½ miles long and about 150 yards wide as it raced east for five minutes starting at 9:42 p.m., said Jim Lee, a meteorologist at the National Weather Service’s office in Sterling, Virginia.

It left a track of intermittent damage, flipping over a tractor trailer near the Fort McHenry Tunnel, ripping down part of the warehouse, and tearing off the roof of a nearby apartment complex in Dundalk, he said.

A Baltimore firefighter with Engine 50, on Broening Highway, witnessed the swirling debris cloud as it passed, Lee said.

The warehouse collapse happened at a loading dock area at the Amazon sorting center, Amazon said.

Amazon said the victims, who were not identified, were “third-party contractors” and not Amazon employees.

One of them was pulled from the rubble overnight Friday and died at the hospital. The body of the second person was found early Saturday.

The fire department had to bring in a crane and other heavy equipment to remove collapsed concrete and other debris.

The Weather Service’s report came after it sent damage-assessment teams to the Baltimore/Dundalk area and to Mount Airy to see whether tornadoes had touched down there.

Structural damage was reported at a shopping center in Mount Airy and elsewhere in the area as powerful winds accompanied an arriving cold front.

A wind gust of 71 mph was reported in Hampstead in Carroll County, and roofs were ripped off two apartment buildings in Baltimore County.

In Baltimore City, the fire department said damage to the Amazon warehouse involved a section of an outer wall measuring about 50 feet by 50 feet that collapsed. An adjacent part of the roof also collapsed.

The warehouse is a long, flat-roofed structure.

Amazon spokesman Dave Clark, the senior vice president of operations, said in a statement Saturday: “The safety of our employees and contractors is our top priority and at this time the building remains closed. We are incredibly thankful for the quick response from emergency services.”

“Our thoughts and prayers go out to the families impacted by Friday evening’s tragic event.”

In Mount Airy, numerous reports of damage began coming in about 8:20 p.m. Friday.

Baltimore is about 35 miles east of Mount Airy.

Gusts in the 40-mph range were measured at several locations in the region.

However, shortly before 11 p.m., the Weather Service reported a weakening in the storm that prompted the warnings.

Heavy rain fell in many areas. Taneytown in Carroll County, got 2.38 inches over night, according to the Weather Service. New Market, in Frederick County, got two inches. Potomac got 1.64 inches.

An inch of rain is the rough equivalent of ten inches of snow. One inch of rain falling on one acre of ground is equal to about 27,154 gallons and weighs about 113 tons, according to the U.S. Geological Survey.