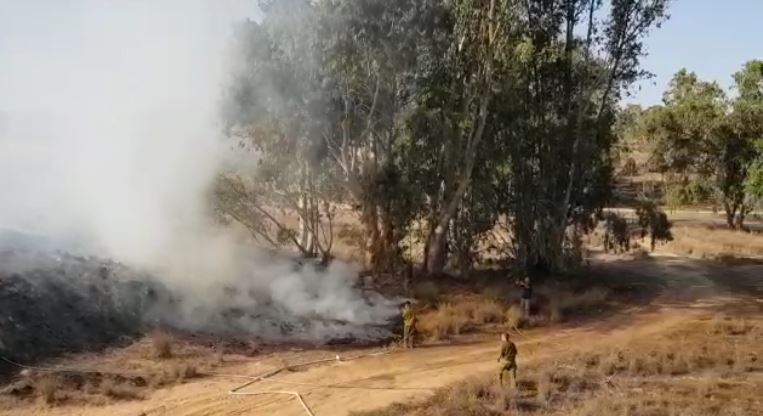 Reports in Arab media Thursday said that Gaza terror groups had agreed to halt their campaign of balloon terror attacks against Israel. In addition, they agreed to stop burning tires on the Gaza border fence. Demonstrations will still continue at the fence, but they will be “nonviolent,” the report on the Quds network said.

In return for the ceasefire, Israel has agreed to expand the zone Gaza fishermen can trawl – a move that was announced Wednesday, with Israel expanding the zone from six miles off the Gaza coast to nine miles. In addition, Israel will allow more gas and fuel into Gaza, in order to allow for more hours of electricity in the Strip, and to allow the United Nations to continue with infrastructure and construction projects that are already underway.

The agreement, said the report, is the result of efforts by Egypt, which has been trying to broker a ceasefire between Israel and Hamas. Last weekend, reports said that there had been good progress toward that agreement, but despite the alleged progress, Israel was hit with 40 rockets overnight Friday. According to the report Thursday, Egyptian intelligence chief will officially announce the ceasefire deal in the coming days.

Despite the talk of the ceasefire, there were at least two incidents involving terror balloons flown into Israel by Gaza Arab terrorists Thursday morning. A balloon with suspicious material attached was found in the yard of a kindergarten in the Eshkol Regional Council, near the Gaza border. A teacher noticed the balloon and evacuated the children, calling security officials to disarm the balloon. It was successfully removed.

Earlier, firefighters in the area of Kibbutz Alumim, also in the border area, were busy putting out a fire that destroyed a vehicle belonging to one of the security chiefs in the area. Firefighters believe that the fire was started by a balloon with an incendiary device attached.

In a statement, Gadi Yarkoni, head of the Eshkol Regional Council, said that “residents of the Gaza border area have shown exceptional patience and restraint in the wake of these attacks. Our residents are aware of the dangers and follow the instructions of authorities, and they are able to identify the incendiary devices that are sent our way. We expect the government to show the same responsibility towards citizens and end the ongoing terror we face, ensuring the safety of residents. The writing is on the wall, and the responsibility is yours,” he said.