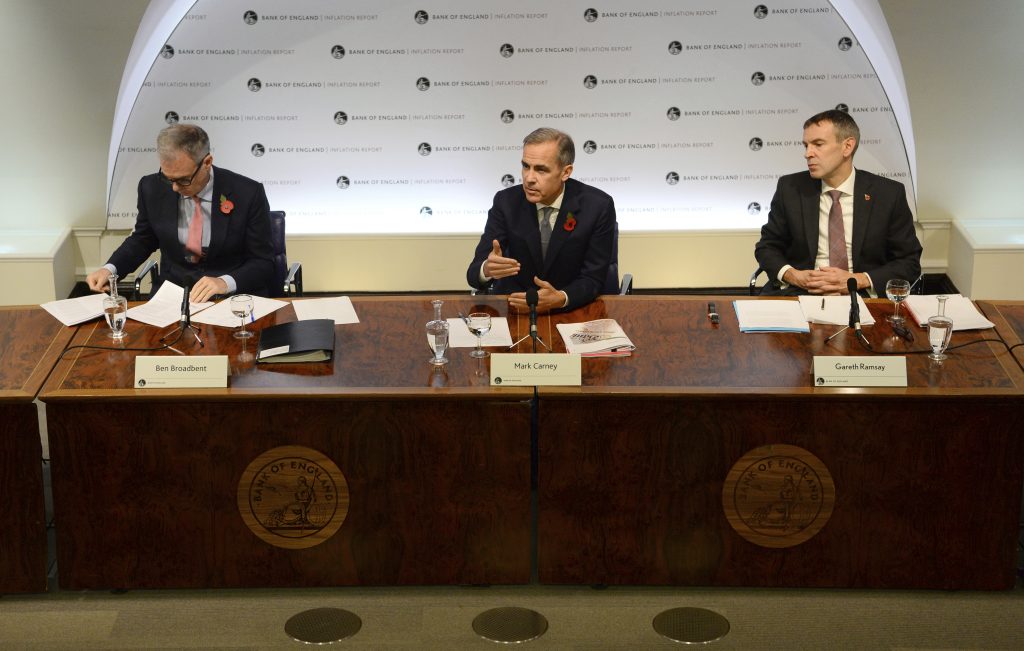 The Bank of England warned Thursday that Britain could suffer an economic shock if it crashes out of the European Union without a deal, saying it could cause gridlock at ports and an inflation-rearing fall in the pound that could require higher interest rates.

After the bank decided to keep its main rate at 0.75 percent, Governor Mark Carney said the British economy’s supply capacity — that is, what the country is able to produce — could “fall sharply” in case of a disorderly Brexit.

“An abrupt and disorderly withdrawal could result in delays at borders, disruptions to supply chains, and more rapid and costly shifts in patterns of production, severely impairing the productive capacity of some U.K. businesses,” he said.

Carney said policymakers would have to try to work out which of the changes were short-term — caused by logistical challenges related to the end of free movement of goods and services, for example — and which would affect the economy in the longer-term.

The bank could be forced to raise interest rates, depending on how the pound reacts, he said. After Britain voted to leave the EU in June 2016, the currency fell 15 percent against major currencies, stoking inflation by making imports more expensive.

The bank, which is tasked with keeping inflation stable, is predicting another fall in the pound if Britain leaves the EU without a deal and no transition to smoothen out the exit.

“There are scenarios where policy would have to be tightened,” Carney told a news conference, while adding that a no-deal Brexit is “not the most likely scenario.”

Many economists doubt the central bank’s initial response to a disorderly Brexit would be to increase rates. After the 2016 referendum, when the pound had fallen, the bank cut rates.

The Bank of England, which has raised its key rate twice over the past year, is more likely to slash its benchmark rate to zero, economists say. And it could add stimulus by buying corporate bonds.

Carney’s comments come as Prime Minister Theresa May struggles to keep her divided Conservative Party in check in the Brexit discussions.

The talks are hung up in particular on the question of how to avoid reinstating a hard border between EU member Ireland and Northern Ireland, which is part of the United Kingdom.

A summit of EU leaders in October was supposed to be the moment at which to reach a Brexit deal. Now officials are talking about a summit in December as the last chance for a deal. By then, many Britain-based firms may have already activated contingency plans that could include transferring business to the continent and cutting jobs.

PM May’s proposal for a Brexit deal is to essentially keep Britain in the European single market for goods, which would avoid tariffs and help keep supply chains operating without delays.

Though households have weathered the uncertainty and continued to spend, thanks to an increase in wages, the uncertainty has hit business investment. In a survey, the Bank of England found that more than 50 percent of firms identified Brexit as being one of the top three sources of uncertainty in September and October, up around 10 percentage points from August.

The bank said there has been little evidence of significant precautionary stock-building ahead of Brexit, though it said it’s possible that could occur over the rest of this year and early next if concerns about Brexit persist. If the Brexit transition goes smoothly, the central bank is predicting a pick-up in business investment next year.

That would help growth rise to around 1.75 percent a year on average over the coming three years. Under this scenario, interest rates would rise by a quarter percentage point per year over the period.

But, echoing comments by the Treasury chief this week, Carney said the bank would have to revisit its forecasts in the event of a no-deal Brexit.

“The economic outlook depends significantly on the nature of EU withdrawal, in particular the form of new trading arrangements between the EU and U.K. and whether the transition to them is abrupt or smooth and how households, businesses and financial markets respond,” he said.