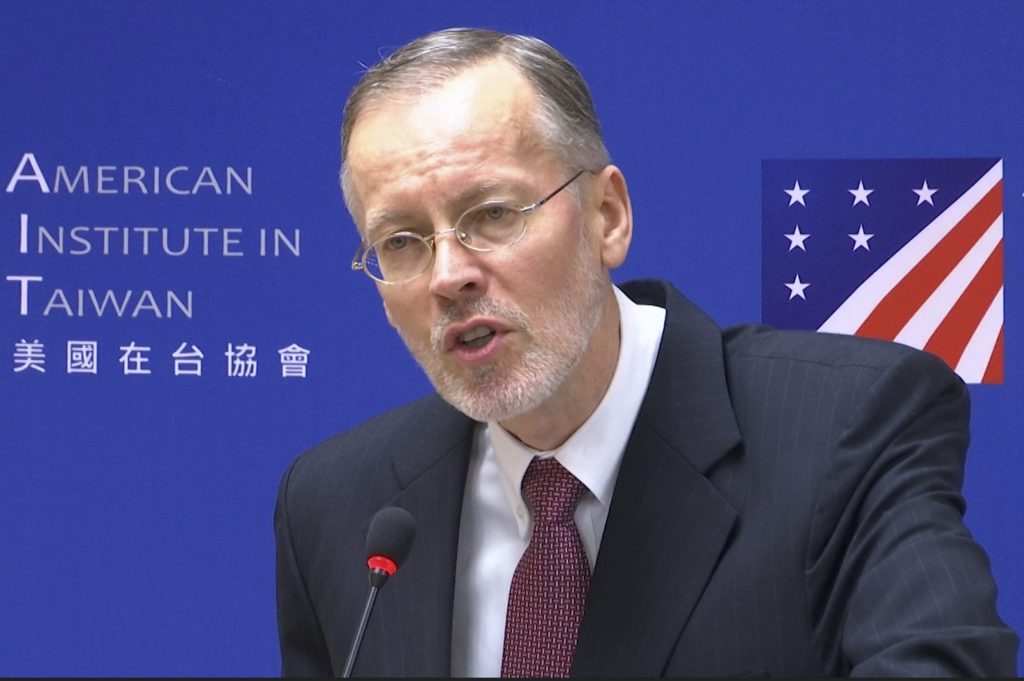 Any attempt to determine Taiwan’s future by “other than peaceful means” is a threat to regional security and a matter of “grave concern” to the United States, Washington’s de facto ambassador to Taipei said Wednesday, in a nod to Chinese military intimidation against the island.

Brent Christensen also said Washington would continue military sales to Taiwan while promoting its participation in the international community that Beijing increasingly seeks to restrict.

China considers Taiwan its own territory to be absorbed using force if necessary. It has lately stepped up its threats in an attempt to undermine President Tsai Ing-wen, who has refused to bow to Beijing’s demand that she recognize Taiwan as a part of China.

The U.S. cut formal ties with Taiwan in 1979 to recognize Beijing but the two maintain robust unofficial military and diplomatic ties. Those relations are underpinned by the Taiwan Relations Act, which requires the U.S. to ensure that Taiwan has the ability to defend itself and U.S. policy “has not changed” in the 40 years since its passage, Christensen said at a news conference.

“Any effort to determine the future of Taiwan by other than peaceful means represents a threat to the peace and security of the Western Pacific area and is of grave concern to the United States,” said Christensen, who heads the American Institute in Taiwan, which functions as an embassy in all but name. “We are opposed to unilateral attempts to change the status quo.”

Christensen pointed to a recent $330 million arms sale to Taiwan as evidence of Washington’s fulfilling its obligation to support Taiwan in “maintaining a sufficient self-defense capability against coercion.”

A Chinese Foreign Ministry spokesman on Wednesday reiterated Beijing’s strong opposition to arms sales and “any kind of official exchanges and military interactions between the U.S. and Taiwan.”

“We hope the U.S. will deal with Taiwan-related issues with caution so as to avoid the impacts on China-U.S. relations and peace and stability in the Taiwan Strait,” Lu Kang said at a daily briefing.

While the U.S. encourages dialogue between China and Taiwan, it will at the same time cooperate to promote shared democratic values and improve economic relations with the island, Christensen said.

That includes ensuring Taiwan has a voice in international organizations from which Taiwan has been excluded. China has used its economic might and diplomatic clout to keep Taiwan out of the United Nations, and has increased the pressure by blocking Taipei’s representatives from attending international meetings such as the World Health Assembly, while pressuring multinational companies ranging from fashion brands to airlines to describe Taiwan as part of China.

Alarmed by the deteriorating situation, the U.S. in September recalled its envoys to the Dominican Republic, El Salvador and Panama after decisions by those nations to cut ties with Taiwan in favor of diplomatic relations with China. Taiwan now has just 17 diplomatic allies as China ratchets up pressure on the island’s government to endorse its “One-China” principle.

“The United States has long been a vocal supporter of Taiwan’s meaningful participation in international organizations, and we continue our informal consultations and engagement to allow Taiwan to have a more substantive role in the international community,” Christensen said.

Taiwan, a former Japanese colony, split from the mainland in 1949 after Chiang Kai-shek’s Nationalists fled there following defeat by Mao Zedong’s Communist army.