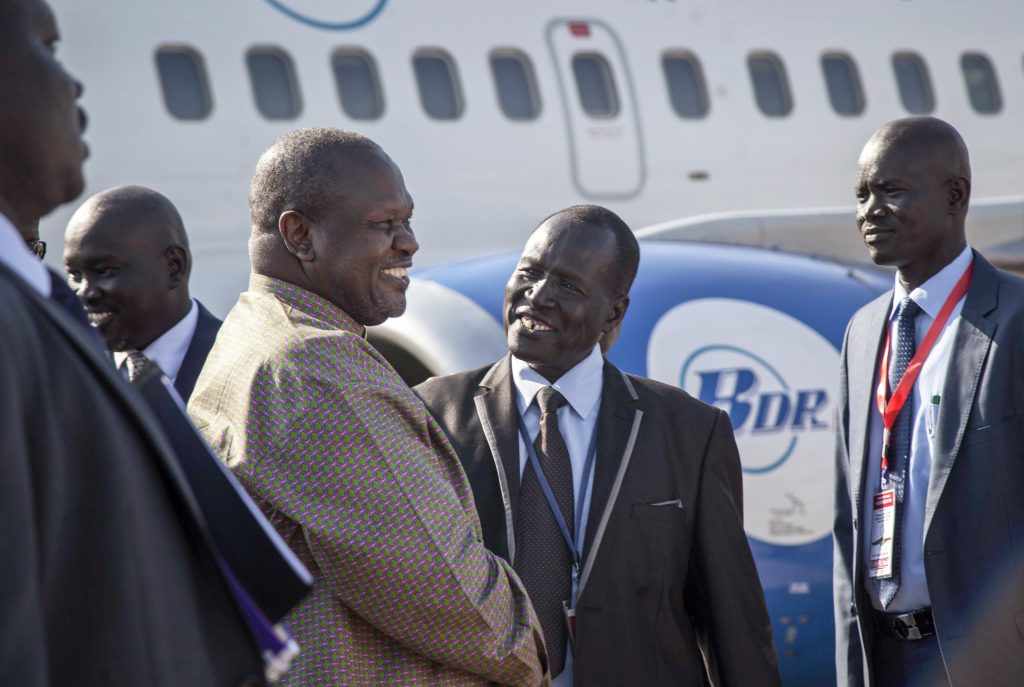 For the first time since fleeing South Sudan more than two years ago, opposition leader Riek Machar returned on Wednesday to take part in a nationwide peace celebration.

“I came only to confirm to people that I am for peace. The past is gone. We have opened a new chapter for peace and unity, ” said Machar, speaking in both Arabic and English to several thousand at the event. He assured South Sudan’s citizens that peace was in the hearts of all members of the opposition and those attending have seen peace with their own eyes.

Machar promised to strengthen government institutions, address corruption and injustice, and said that the new government would uphold accountability.

South Sudan President Salva Kiir said Machar’s return marked the end of the civil war and warned the “prophets of doom” who were waiting for another explosion in Juba that peace was here to stay. Addressing the South Sudanese people directly, Kiir apologized for five years of brutal fighting and said the responsibility falls on his shoulders.

“I deeply regret the psychological and emotional wounds inflicted on you by this war,” he said.

Kiir also announced that the pardons of two opposition members who had been sentenced to death. The two being pardoned are William John Endly, a South African national and former adviser to Riek Machar who will be deported immediately and longtime spokesman for Machar, James Gadet who will be released as well.

Also attending the peace celebrations were South Sudan’s other opposition groups and the leaders of Sudan, Ethiopia, Uganda, Somalia and Egypt.

Under the new peace deal signed on September 12, Machar will once again serve as a vice president in President Salva Kiir’s government. This will be the third time the two men will try to work together since the country erupted into civil war in 2013. The last attempt failed when fighting broke out in the capital Juba in July 2016 and Machar escaped the country on foot.

Five years of fighting in South Sudan has crippled the country, displacing millions and killing almost 400,000 people from violence and disease according to a recent report.

The latest peace deal has been met with skepticism by the international community, including the United States, Norway and the .U.K, the troika which ushered South Sudan into independence in 2011. Since the deal was signed six weeks ago it has been criticized for slow implementation, missed deadlines and continued cease-fire violations.

While security concerns remain surrounding Machar’s return, he has come back to give confidence to the population and to put more pressure on the government to implement the peace process, opposition spokesman Mabior Garang de Mabior told The Associated Press.

At least one South Sudan expert says Machar’s return is a positive step toward peace.

“This indicates South Sudanese leaders’ readiness to implement the agreement. That President Kiir invited Dr. Riek (Machar) ahead of the implementation schedule and Dr. Riek responding positively, in particular, offers reason to be hopeful. I think that this shows a genuine desire by the leaders to end the conflict,” said Augustino Ting Mayai, researcher at the Sudd Institute.

Some locals in Juba, however, are more wary of his return.

“We’ll feel peace when we have three meals a day, when we can afford basic needs, when we can put our children and siblings through school, when we are paid our salaries at the end of each month, when we are no longer being attacked by ‘unknown gunmen.’ That would be peace. Machar’s coming home is just that — he’s coming home. I’m not sure what else it means,” Eva Lopa, South Sudan radio personality, told AP.