Community The Shabbos Project Across the Nation
Community 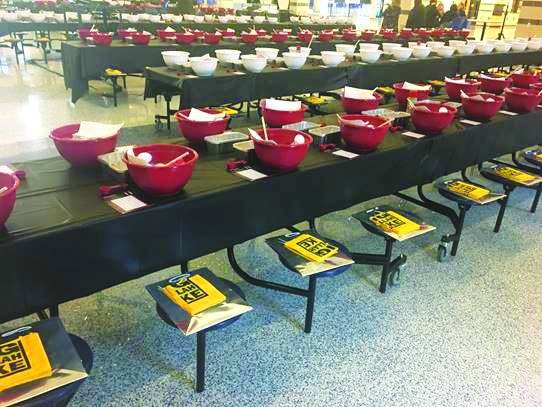 Over 1,400 cities in 97 countries worldwide celebrated the international Shabbos Project, with challah bakes, Havdalah concerts, community Shabbos meals, and of course, shemiras Shabbos. Here is a very small sampling of how the Shabbos Project was celebrated in three different communities in the United States.

The Arizona Shabbos Project began on Monday evening, as more than 100 men of all ages and backgrounds came together to enjoy a delicious kosher meal and be inspired with four Jewish TED Talks.

TED talks are short, inspirational talks on a variety of subjects. Each TED talk was seven minutes long and covered personal stories of Shabbos, teshuvah, happiness, and personal choice. In between each TED Talk, there were raffles for tennis lessons, kosher whisky, and a kosher dinner certificate.

The evening ended with a panel discussion on topics such as tikkun olam, the definition of Jewish manhood, the source for the Shabbos rituals, and more. Jews, both more and less religiously affiliated, mingled and shared a beautiful evening of mutual inspiration, learning and preparing for the worldwide Shabbos Project.

In addition, the Great Arizona Challah Bake was held on Thursday evening. For the first time, it was split into three locations: Chandler, Phoenix and Scottsdale.

Mrs. Jamie Geller, celebrity chef, presented her personal story, “From HBO to the Holyland,” describing her journey to mitzvah observance. The presentation was held in Scottsdale, and then live-streamed to all the other locations.

The 500 women of all ages and backgrounds who were attending were thrilled and inspired. After Mrs. Geller shared her story, the ladies made their challah, danced and enjoyed thrilling Shabbos dance videos.

On Shabbos, communal seudos were hosted all over Phoenix and Scottsdale. Mrs. Geller spent Shabbos at Ahavas Torah of Scottsdale, where she spoke after the weekly Kiddush, and also led a women’s question-and-answer group on Shabbos afternoon.

In Bucks County, Pennsylvania, over 300 women and girls gathered on Wednesday evening in the Bensalem High School for the annual challah bake.

The elation and excitement of these women from all different backgrounds and of all different levels of observance could be felt in the air. Mrs. Rochel Leah Pick from Lakewood, New Jersey, led the evening with an amazing combination of warmth, vibrancy, humor and passion.

The program began with a short introduction by Rabbi Moshe Travitsky, of the Bensalem Jewish Outreach Center, pleading with everyone to keep this Shabbos as part of the worldwide Shabbos project and describing the power women have to hasten the coming of Moshiach with their mitzvos and emunah.

Leichter were given as a gift to any woman who would start lighting candles this Shabbos, and everyone was invited to spend a Shabbos in Bensalem with the Bensalem Jewish Outreach Center.

This incredible evening was organized by the women of the Bensalem Jewish Outreach Center community who spent countless hours to produce a masterpiece of inspiration for the community.

The Shabbos Project in Bensalem was an amazing weekend as many families who do not regularly keep Shabbos joined the Bensalem community to experience a full-fledged Shabbos.

In Savannah, Georgia, a beautiful challah bake was held at Congregation Bnai Brith Jacob, with the participation of over 150 women spanning the entire spectrum of the Jewish community.

On Leil Shabbos, large seudos were hosted at homes throughout the community; in one location, the street was closed off and the seudah was held outside in order to accommodate a large crowd of people.

Rabbi Eli Lob, the coordinator of the Savannah Shabbos Project, reported, “Seudos were held every few blocks and were open to anyone within the community. Anyone who wanted to enjoy a Friday night seudah would have a place to go.”

On Shabbos day, a delicious communal luncheon was held at Bnai Brith Jacob, with approximately 175 people in attendance. The theme of the seudah was “Stars Within the Community,” and in lieu of a guest speaker, three local residents, representing different age groups within the community (a grandparent, a parent, and a young Jewish professional) spoke about what Shabbos and Yiddishkeit means to them.

For example, Dr. Benjamin Warsaw, a music professor representing the young Jewish professionals, described his recent journey towards Torah Judaism, and the significance of Shabbos as a part of that journey.

During seudah shelishis, also held at Bnai Brith Jacob, a youth and adult choir sang beautiful zemiros together, led by Dr. Jerald Gottlieb. After Shabbos, there was a special musical Havdalah sung by Rabbi Avi Nitekman, with harmony by Rabbi Yaakov Zelig Goldman, accompanied by Rabbi Jeff Gordon on the guitar.

Rabbi Lob summed up the weekend by stating, “It was truly beautiful to experience all the achdus and ruach that took place. We are already working on a follow-up event in order to strengthen the new relationships that were formed throughout the weekend.”