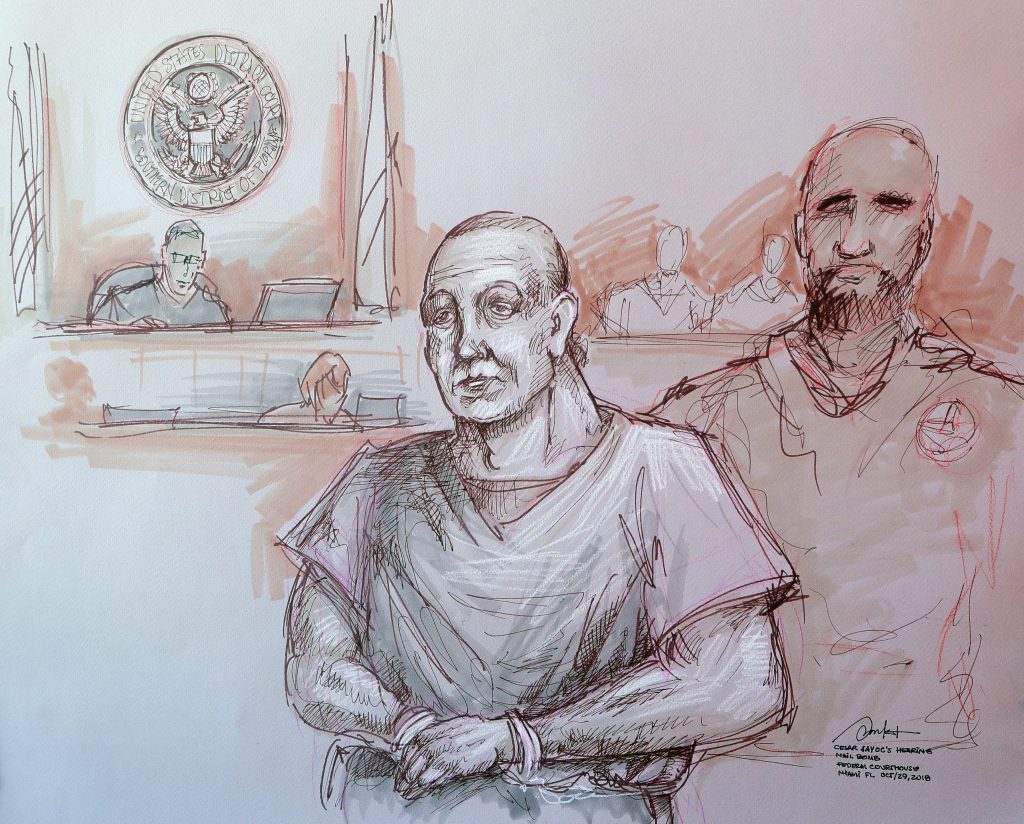 Federal prosecutors alleged in a new court filing that 56-year-old Cesar Sayoc committed “a domestic terrorist attack” in mailing possible package bombs to prominent critics of President Donald Trump, and they detailed more evidence connecting him to the crime.

The late Tuesday filing was part of a bid by prosecutors to keep Sayoc, an ardent Trump supporter with a lengthy criminal record, detained while he awaits trial in federal court.

Emphasizing the seriousness of the allegations against the Aventura, Florida, man, prosecutors alleged for the first time that he was responsible for 15 packages containing possible bombs, two of which were still making their way through the mail after he was in custody. So far, Sayoc has been formally charged in connection with 13 of the devices, though officials have said more charges are likely.

Prosecutors also revealed that investigators seized a laptop from Sayoc’s van that contained a list of addresses matching those on the packages prosecutors say he mailed, plus evidence that he had conducted internet searches on some of his targets. They said the FBI also had “preliminarily identified associations between forensic evidence on most of the [improvised explosive devices] described in the Complaint and DNA and fingerprint samples from the defendant.” Sayoc lived out of his van, which was covered in stickers that aligned with his political views.

“The evidence of the defendant’s terror campaign is still being collected but is already overwhelming,” prosecutors wrote. “Because of the powerful proof that the defendant perpetrated these acts, he poses a substantial danger to the community.”

A defense attorney for Sayoc did not immediately return a message seeking comment. Sayoc is scheduled to appear in federal court in Miami on Friday morning.

Authorities alleged they were but a fraction of people Sayoc had pondered targeting, based on a list he kept on his laptop. In recent days, the FBI has been notifying others on the list so they might take precautions, in case other packages were still making their way through the mail.

As recently as Monday, after Sayoc was in custody, authorities intercepted a package believed to be from Sayoc that had been sent to CNN in Atlanta. Prominent Trump critic Michael Avenatti tweeted Tuesday night that he was among those contacted by law enforcement.

The new court filing suggests that Sayoc was planning the mailers for months. Federal prosecutors wrote that the internet search history on Sayoc’s phone shows he searched “hilary Clinton hime [sic] address” on July 15, and “address Debbie wauserman Shultz” on July 26. Each of the packages listed Shultz — likely a misspelling of Rep. Debbie Wasserman Schultz (D-Fla.) — in the return address.

He searched throughout September and October for the addresses of others — including Obama, Sen. Cory Booker (D-N.J.), major Democratic donor Tom Steyer and Sen. Kamala Harris (D-Calif.), prosecutors alleged in the filing. Booker and Harris are potential 2020 presidential candidates.

The first possible bomb, to liberal billionaire George Soros, was discovered on Oct. 23.

None of the possible bombs exploded, though prosecutors said in a court filing “it is clear that they were dangerous” and they were still being analyzed by technicians. Prosecutors wrote that Sayoc had put in the devices shards of glass “for the apparent purpose of maximizing harm to his intended victims.”