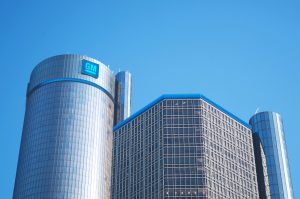 General Motors will attempt to cut costs by offering buyouts to about 18,000 white-collar workers in North America.

The company made the offer Wednesday to salaried workers with 12 or more years of service.

The announcement comes on the same day that GM reported a $2.5 billion third-quarter profit. The company says in a prepared statement that although it is performing well, it wants to continue to reduce costs while the company and the economy are strong.

The auto industry faces looming troubles such as slowing sales in the U.S. and China and higher steel and aluminum prices due to U.S. tariffs.

GM wouldn’t disclose terms of the buyout offers. The company has about 50,000 salaried workers in the U.S., Canada and Mexico.

Company spokesman Patrick Morrissey wouldn’t say whether GM is trying to reach a target number of employees. Those who were given the offer have until Nov. 19 to make a decision, and they would leave the company by the end of the year, he said.

“Even with the progress we’ve made, we are taking proactive steps to get ahead of the curve by accelerating our efforts to address overall business performance. We are doing this while our company and economy are strong. The voluntary severance program for eligible salaried employees is one example of our efforts to improve cost efficiency,” the company said.

GM has long talked about reducing costs in preparation for an economic downturn. The company strives to continue churning out profits through vehicle sales while, at the same time, investing in new technologies such as electric or autonomous cars. The company is close to delivering on a promise to reduce structural costs by $6.5 billion annually by the end of this year.

Savings from the employee reductions would come in 2019, after the buyouts take effect.

Morrissey wouldn’t say if GM will begin to lay employees off if too few workers take voluntary buyouts.

“We will evaluate the need to implement after we see the results of the voluntary program and other cost reduction efforts,” he said.