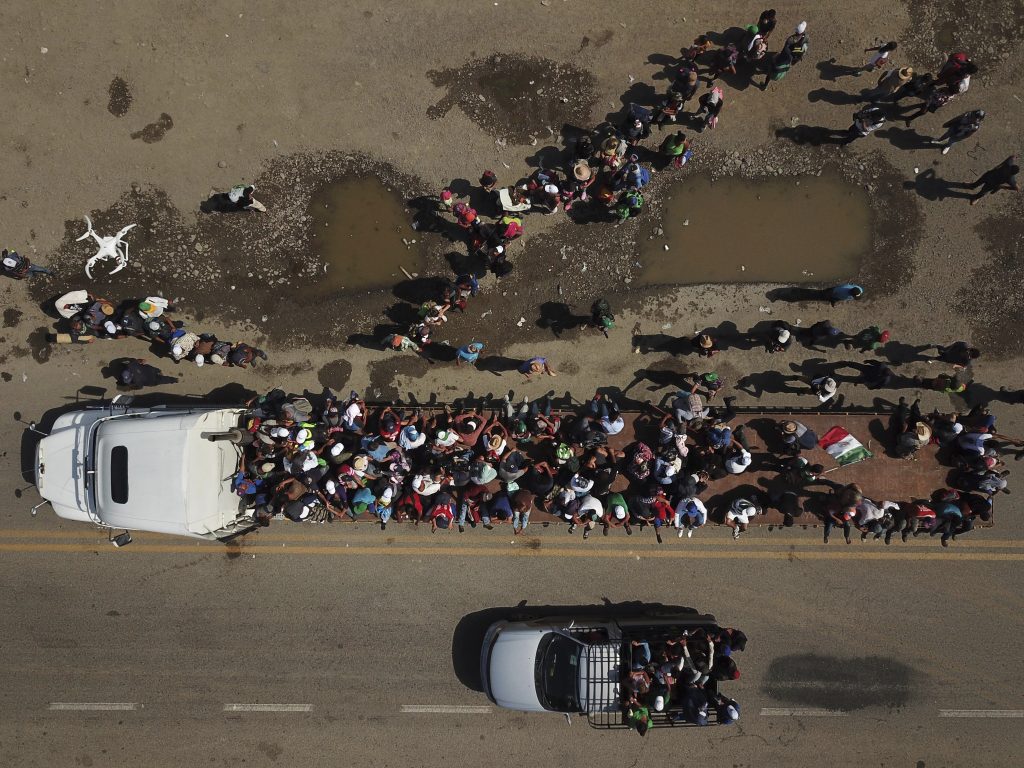 The migrant caravan slowly advancing through southern Mexico is demanding the Mexican government help its 4,000 participants reach Mexico City even as a smaller group of Central Americans entered the country, presumably with the intention of joining it.

Worn down from long miles of walking and frustrated by the caravan’s slow progress, some migrants have been dropping out and returning home or applying for protected status in Mexico. Conscious of that frustration, its representatives demanded “safe and dignified” transportation to the capital Monday after the group arrived in the Oaxaca state town of Niltepec.

The Mexican government has shown no inclination to assist, however, with the exception of its migrant protection agency giving some of the caravan’s stragglers rides to the next town over the weekend.

Pueblo Sin Fronteras, a group supporting the caravan, has said it hopes to hold meetings in Mexico City with federal lawmakers and authorities as well as representatives of the incoming government to discuss migrants’ rights and the caravan’s future.

But Mexican officials seem intent only on seeing the caravan melt away as it travels toward the U.S. border. The government regularly trumpets the number of migrants who have applied for refugee status or asked to return to their home countries.

On Monday, the Federal Police aggressively tried to turn back hundreds more migrants who crossed the Suchiate River to enter Mexico from Guatemala.

A low-flying police helicopter hovered overhead as the migrants waded in large groups across the murky river, apparently trying to use the downdraft from its rotors to discourage them. Guatemala’s Noti7 channel reported that one man drowned and aired video of a man dragging a seemingly lifeless body from the river, but Honduran Vice Foreign Minister Nelly Jerez later told Televicentro that the man was alive and being treated at a hospital in Tapachula, Mexico.

Once on the Mexican side, the migrants were surrounded and escorted by dark-uniformed officers as sirens wailed. The standoff at the riverbank followed a more violent confrontation on the border bridge over the river Sunday night, when migrants threw rocks and used sticks against Mexico police. One migrant died from a head wound during the clash, but the cause was unclear.

The group was much smaller than the first caravan. In the Mexican border town of Ciudad Hidalgo, they said they hoped to continue onward Tuesday morning.

With the original caravan still at least 1,000 miles or more from its goal of reaching the United States, the Pentagon announced it would send 5,200 active-duty troops to “harden” the U.S.-Mexico border. There are already more than 2,000 National Guard troops providing assistance at the border.

The Pentagon announcement comes as President Donald Trump has been focusing on the caravan to stir up his base a week before midterm elections.

Migrants in the caravan planned to walk to Juchitan on Tuesday, a trek of some 32 miles to the west. They may have been emboldened Monday by the efforts of one small town to help them move. More than 100 migrants lined up at a gas station parking lot to wait for rides in Zanatepec.

“We are helping our brothers from other countries with food, water, and transportation,” Nolasco said. “It is going to be very little, compared to what they need.”

Illustrating the waning enthusiasm, some migrants gathered at a checkpoint near Tapanatepec to ask for help returning home to Honduras, the origin of the great majority of those in the caravan. Exhausted from many days on the road, and disheartened by the many miles yet to go and misbehavior by some fellow travelers, people have been dropping out and the caravan has contracted from its peak of an estimated 7,000 participants.

“Of the friends that I have been with, all want to go back,” said Hasiel Isamar Hernandez, a 28-year-old mother of three. For her, the last straw was when she heard from her husband that her 3-year-old daughter back home had stopped eating because she missed her mother.

The second group at the border with Guatemala has been more unruly than the first. Guatemala’s Interior Ministry said Guatemalan police officers were injured when the migrants broke through border barriers on Guatemala’s side of the bridge.

Mexico’s Interior Department said in a statement that two Hondurans ages 17 and 22 were arrested Monday when one of them tried to shoot at police in the town of Ignacio Zaragoza, near the Hidalgo border crossing. It said the Glock failed to fire, and no agents were injured.

El Salvador’s immigration agency, meanwhile, said a group of Salvadorans including several dozen children and adolescents that crossed legally into Guatemala on Sunday numbered about 500.