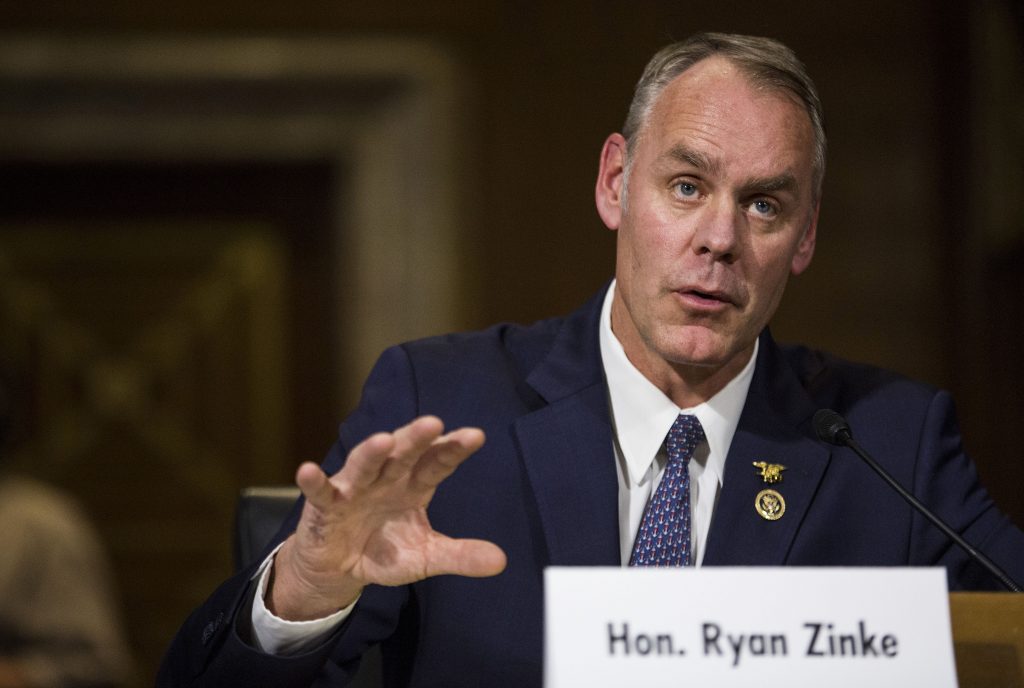 The Interior Department’s Office of Inspector General has referred one of its ongoing probes into the conduct of Secretary Ryan Zinke to the Justice Department for further investigation, according to two individuals familiar with the matter.

Interior Deputy Inspector General Mary Kendall, who is currently serving as acting inspector general, is conducting at least three probes that involve Zinke. These include his involvement in a Montana land deal and the decision not to grant two tribes approval to operate a casino in Connecticut. The individuals, who spoke of the condition of anonymity because they were not authorized to speak publicly, did not specify which inquiry had been referred to the Justice Department.

A spokeswoman for the inspector’s office declined to comment on the matter Tuesday, saying, ” I cannot comment on any investigations.” Neither Interior nor the Justice Department immediately responded to a request for comment.

Since taking office in March 2017, Zinke has come under scrutiny for his travel practices as well as other aspects of his job performance, though his aides have dismissed these allegations as politically motivated. Earlier this month, the inspector general’s office released a report finding that Zinke’s decision to allow his wife to travel with him sparked concerns among the department’s ethics officials.

Zinke is actively looking for a political nominee who could replace Kendall, a career official who has served in an acting capacity since 2009. Two weeks ago, Housing and Urban Development Secretary Ben Carson sent an email to his staff announcing that one of his top aides, Suzanne Israel Tufts, would be taking over as Interior’s acting inspector general. But Zinke’s aides disavowed this idea several days later, describing Carson’s email as “100 percent false.”

Interior’s inspector general has continued to look into Zinke’s conduct even as the debate over a replacement for Kendall has played out in public.

One of the most serious allegations under investigation regards the secretary’s role in a Montana land development deal backed by David Lesar, chairman of the oil services firm Halliburton. The business and retail park, known as 95 Karrow, is slated to include several businesses and would be near multiple parcels of land owned by Zinke and his wife. The deal involves land owned by a foundation now headed by Zinke’s wife, Lola, which the secretary used to run before joining the Trump administration.

While Zinke has stepped down as president of the Great Northern Veterans Peace Park Foundation, records obtained under the Freedom of Information Act show that he met with Lesar, his son and the lead project developer, Casey Malmquist, since taking office. He also corresponded with Malmquist about the project’s design, the records reveal.

Halliburton’s operations are directly affected by many of Interior’s policies, including rules on how oil and gas drilling must be conducted, and which public lands and federal waters are open to energy exploration and development.

Separately, the inspector’s office is examining Zinke’s involvement in his department’s refusal to sign off on a proposed casino deal in Connecticut involving the Mashantucket Pequot and Mohegan tribes. Interior career staffers had recommended approving the tribes’ application to jointly run the casino, which would have competed with an MGM Resorts International casino across the border, in Massachusetts. But MGM and two Nevada senators lobbied against the permit, and in the end, Zinke did not grant it.

Interior’s inspector general has subpoenaed documents from MGM, according to two individuals briefed on the inquiry, who spoke on the condition of anonymity on the grounds that the probe is still underway.

Asked about the subpoena earlier this month, MGM Resorts International spokeswoman Debra DeShong said in an email, “We are not in a position to comment in light of the ongoing litigation filed by the Mashantucket Pequot Tribe and State of Connecticut.”