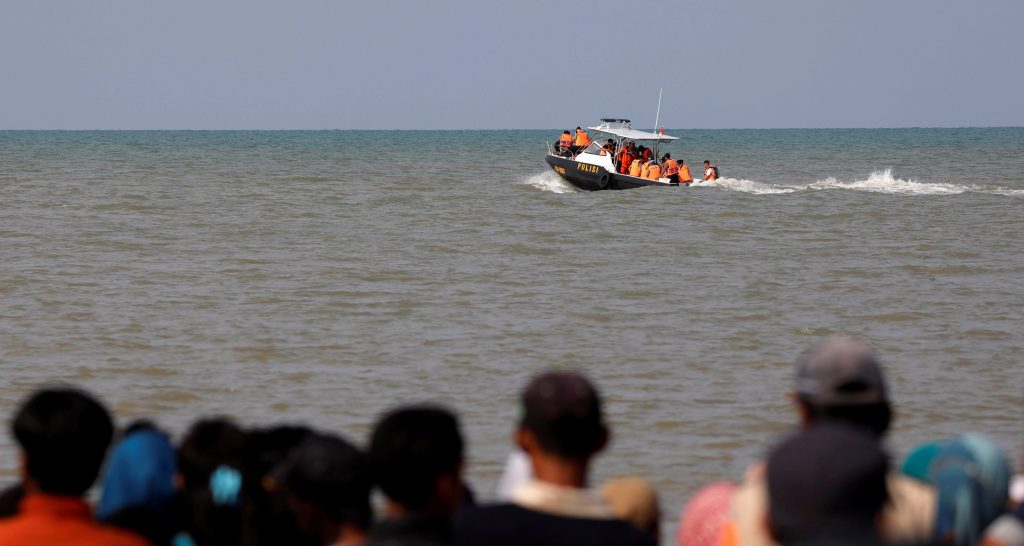 Indonesia deployed divers on Tuesday to search for an airliner that crashed with 189 people on board, as “pinger locators” tried to zero in on its cockpit recorders and find out why an almost-new plane went down in the sea minutes after take-off.

Indonesia, one of the world’s fastest-growing aviation markets, has a patchy safety record. With the now almost certain prospect of all on board having died, the crash is set to rank as its second-worst air disaster.

Ground staff lost contact with flight JT610 of budget airline Lion Air 13 minutes after the Boeing 737 MAX 8 aircraft took off early on Monday from the airport in Jakarta, the capital, on its way to the tin-mining town of Pangkal Pinang.

Dozens of relatives of those on board gathered at a police hospital where body bags were brought for forensic doctors to try to identify victims, including by taking saliva swabs from family members for DNA tests.

“I keep praying for a miracle although logically, the plane has sunk in the ocean,” said Toni Priyono Adhi, whose daughter was on the flight.

A Reuters witness on a boat at the crash site saw about 60 divers scattered in inflatable boats over the slightly choppy waters entering the sea, which is about 115 feet deep.

Sonar vessels and an underwater drone have also been hunting for the wreckage of the fuselage, where many victims were feared trapped, officials said.

The head of a national transport safety panel, Soerjanto Tjahjono, said that underwater “pinger locators”, including equipment from Singapore, were being deployed to help find the aircraft’s black boxes.

The priority is finding the cockpit voice recorder and flight data recorder to help determine the cause of the disaster, safety experts said.

“The visibility is not good as it’s very overcast,” a special forces officer said.

Underwater footage released by the national search and rescue agency showed relatively poor visibility. In all, 35 vessels are helping to search.

But only debris, personal items, including 52 identification cards and passports, and body parts have been found off the shore of Karawang district, east of Jakarta.

Police said human remains were collected in 37 body bags after sweeps of the site, roughly nine miles off the coast.

Most of those on board were Indonesian but the airline has said an Italian passenger and Indian pilot were on the plane.

The pilot of flight JT610 had asked to return to base shortly after it took off, at about 6.20 a.m. on Monday. Investigators are trying to determine why the pilot issued the request, which was granted.

The deputy of the national transportation safety committee told a news conference the plane had technical problems on its previous flight, from the city of Denpasar on Bali island on Sunday, including an issue over “unreliable airspeed”.

“We are also asking for information from the last pilot who flew from Denpasar to Jakarta, but we have not met the technician,” Haryo Satmiko said, referring to the technician who handled the aircraft after it landed on Sunday.

The committee also had a recording of the conversation between the pilot of JT610 before it crashed and the control tower at Jakarta, he said.

Transport Minister Budi Karya Sumadi told reporters at Jakarta’s dock that the investigation would result in sanctions being handed out, but he did not elaborate.

Lion had operated 11 Boeing 737 MAX 8s and a transport ministry official said inspections would be made on all of those models operating in Indonesia though they would not be grounded.

On Monday, the U.S. National Transportation Safety Board and Boeing Co said they were providing assistance for the investigation.

The accident is the first to be reported involving the widely sold Boeing 737 MAX, an updated, more fuel-efficient version of the manufacturer’s workhorse single-aisle jet.

Two witnesses described the plane as swaying or rocking as it came down, adding that the nose hit the water first and there was a tall column of smoke afterwards.

The aircraft did not make a noise when it came down, they said.

“From a long way off, it was already leaning,” said Gauk, a fisherman who uses one name.

Privately owned Lion Air, founded in 1999, said the aircraft, which had been in operation since August, was airworthy, with its pilot and co-pilot together having amassed 11,000 hours of flying time.

Indonesia’s worst air disaster was in 1997, when a Garuda Indonesia A300 crashed in the city of Medan, killing 234 people.