In advance of the coming congressional elections, Rep. Chris Smith (R-NJ) held a meeting with a group of Lakewood askanim.

The meeting was held in the offices of the Lakewood Community Services Corporation (LCSC) last Wednesday and was attended by members of the Lakewood Vaad, LCSC, and Lakewood Recourse and Referral Center (LRRC).

Rep. Smith reiterated his commitments to traditional values as well as legally respecting and protecting the absolute right to life for all, including the unborn, elderly and medically fragile, stressing his personal sympathy with the moral positions of Lakewood’s Orthodox community.

He shared several stories of his efforts to aid refuseniks in the USSR and his many efforts in Congress to combat global anti-Semitism especially in his role on the House Foreign Affairs committee. 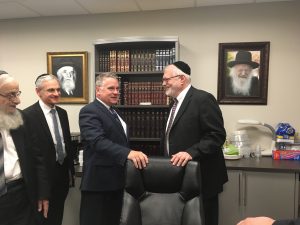 “It’s baffling and frustrating at times,” said the congressman of the opposition many of his legislative efforts have met over the years. “But I never give up.”

“Frankly, it was a breath of fresh air and music to our ears to hear a respected public servant so articulately advocate for kedushah throughout our nation and for safety of Yidden throughout the world,” reflected Rabbi Moshe Zev Weisberg of The Lakewood Vaad and LCSC.

He is heavily favored to win on the upcoming election day against a little known Democratic challenger.