There is no sign of survivors after a passenger plane with 189 people on board crashed into the sea on Monday just minutes after taking off from the Indonesian capital of Jakarta, officials said.

Rescuers found debris from the Lion Air Boeing 737 MAX 8 in West Java province, about 45 miles east of Jakarta, according to the head of Indonesia’s national search and rescue agency, Muhammad Syaugi.

“We’ve searched the sea surface and found no survivors,” Syaugi told DPA, adding that several body parts had been found.

Bambang Suryo Adjie, head of operations at the agency, said, “My prediction is no one survived, looking at the body parts that have been found.

“We are focused on retrieving the victims,” he said.

Divers were trying to reach the Boeing 737 MAX 8’s fuselage, which is believed to have reached the sea floor at a depth of about 115 feet, Syaugi said.

Photos posted on Twitter by the spokesman for the National Disaster Management Agency showed items such as a mangled mobile phone, a torn bag and a large piece of wreckage believed to be from the aircraft.

The items were found by the crew of a ship belonging to the state oil company Pertamina near its offshore site, agency spokesman Sutopo Nugroho said.

Sutopo and the Transport Ministry had earlier said plane was carrying 188 people, including a baby, two children and seven crew members. 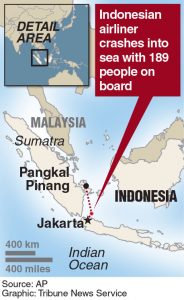 But Lion Air chief executive Edward Sirait said one trainee was among the crew and put the number of people on board at 189.

A distraught woman wept at the National Search and Rescue Agency headquarters in Jakarta as she awaited news about four of her relatives who were on the flight.

“They were supposed to attend a family event in Tanjung Pinang,” said the woman, who gave her name as Veny. “I hope they will be found.”

At least 21 employees of the Finance Ministry who had attended a work meeting in Jakarta were among the passengers, said ministry spokesman Nufransa Wira Sakti.

Sony Setiawan, another Finance Ministry employee in Bangka-Belitung, missed the flight because of a heavy traffic jam.

“My knees became weak and I cried when I heard the news,” Sony told CNN Indonesia. “My friends were on the plane.”

Lion Air chief Sirait said the pilot had asked to return to base because of an unknown problem after takeoff.

He added the Boeing 737 MAX 8 had had a technical problem on a previous flight that was fixed before Monday’s departure.

The head of the National Transportation Safety Committee, Soerjanto Tjahjono, said the plane was only two months old and had completed only 800 flying hours.

A spokesman for the air navigation company AirNav said the plane lost contact 13 minutes after taking off from Soekarno-Hatta International Airport at 6:20 a.m. (11:20 p.m. GMT Sunday).

It had been scheduled to land in Pangkal Pinang in the province of Bangka-Belitung Islands at 7:20 am.

The weather conditions were considered safe when the plane took off.

Indonesia, the world’s largest archipelagic country, has experienced a boom in low cost-carriers following the liberalization of the aviation industry in the early 2000s. Lion Air is the largest among budget airlines operating in the country.

In 2013, a Lion Air Boeing 737 carrying more than 100 people crashed into the sea while trying to land on the resort island of Bali, nearly splitting the fuselage into two, though there were no fatalities.

In June, the European Union removed Indonesian airlines from its list of carriers that do not meet international safety standards.

The blanket ban preventing Indonesian carriers from operating in Europe was imposed in 2007 following a string of deadly air incidents. Several Indonesian airlines, including flag carrier Garuda, were taken off the ban list in 2009 after steps were taken to improve safety.

Before Monday’s crash, Indonesia’s last major commercial aviation accident occurred in 2014, when an Air Asia Airbus A320-216 plunged into the Java Sea during bad weather, killing all 155 passengers and seven crew on board.

The following year, a C-130 Hercules belonging to the Indonesian Air Force crashed into the city of Medan on Sumatra island, killing 121 people on board and 22 people on the ground.