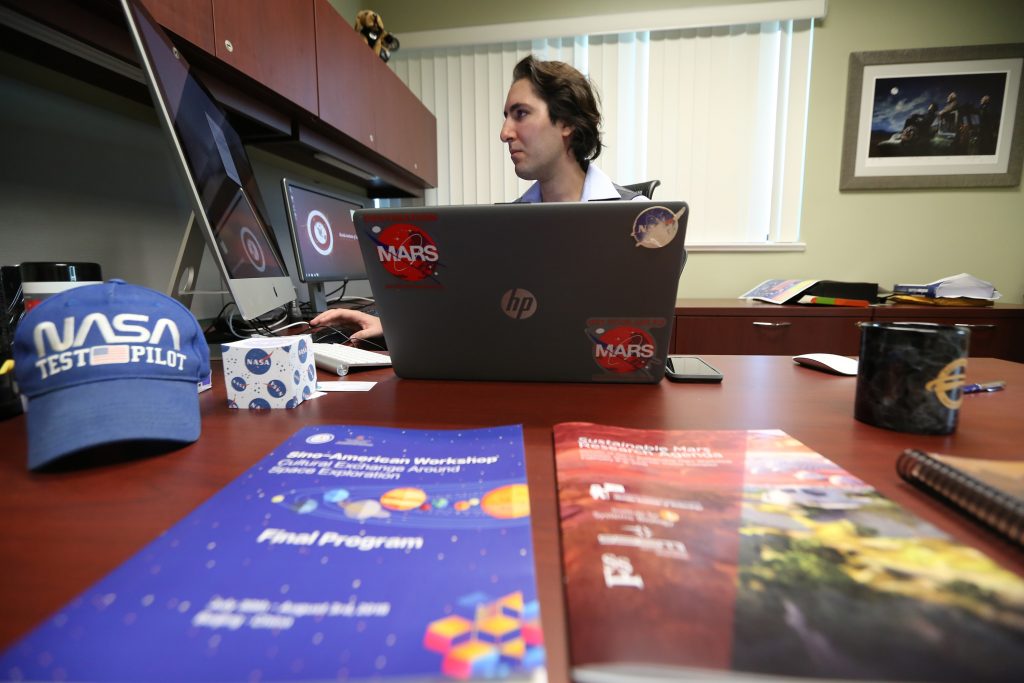 Glow-in-the-dark stars twinkling inside his childhood bedroom and science fiction books in his lap, Shayan Shirshekar grew up like most kids fascinated by space. When he was old enough to say what he wanted to be when he was older, his answer was always immediate: an astronaut.

Like many with such aspirations, Shirshekar dreamed of a future working at NASA or a private U.S. space company. It was the gold standard, he thought, something to strive for.

There was one snag, though: Shirshekar grew up at what for him was the unlucky side of Lake Ontario, in Toronto, an hour drive from the U.S. border. That’s about the same distance as downtown Orlando from Kennedy Space Center.

But that distance is important when it comes to the stringent U.S. regulations that govern the space industry. It’s the roadblock in front of Shirshekar and other international students who come to this country to study space only to find that they’ll be hard-pressed to secure jobs when they graduate.

A year and a half from graduation, despite good grades and a job at the Aldrin Space Institute, which is run by second-man-on-the-moon Buzz Aldrin’s son Andy Aldrin, Shirshekar has no job prospects.

“I was trying to follow my passion and look where that’s led me,” said Shirshekar, 30. “My parents ask me time and time again, ‘When are you going to get a job?’ It’s that unfortunate pressure where you have dedicated all this time and I’ve traveled around the States in hopes of building something and no opportunity has arisen.”

Since the International Traffic in Arms Regulation (ITAR) was enacted in 1976, classifying spacecraft and rockets as military technology, international students have been hamstrung from getting jobs in the field. Only “U.S. persons,” or in other words, citizens or permanent residents, can work for NASA or major private space companies under ITAR.

The problem, though not new, is perhaps more acute now that the space industry in the U.S. — and particularly Florida’s Space Coast — is flourishing. Companies are scrambling to find qualified employees to temper a national shortage in the science, technology, engineering and math fields, the kind of careers that feed the space industry.

Ironically, many of those qualified students are already here at schools such as the University of Central Florida, Embry–Riddle Aeronautical University and the Florida Institute of Technology in Melbourne, where Shirshekar is a doctoral candidate. Florida Tech, in particular, prides itself in a student body that is about one-third international. The school has been ranked number one in the nation for its foreign student population by U.S. News and World Report for at least the past four years.

“It’s really frustrating,” said Laura Seward Forczyk, owner of space consulting firm Astrolytical and a Florida Tech grad. “These were students who came to the U.S., were trained here. So we spend the resources, the time to train people in highly educated, high in-demand fields, and then they take that and leave.”

Brain drain in this industry has happened before and with dire consequences. Most famously, rocket scientist Qian Xuesen, who immigrated to the U.S. in the 1930s to attend school, went on to become one of the founders of NASA’s famed Jet Propulsion Laboratory. His design for a winged space plane inspired the space shuttle. But in the 1950s, accused of being a communist sympathizer, he was deported to China. He went on to become the most central figure in the rise of the Chinese space program, currently one of NASA’s major competitors.

The Shadow of ITAR

For many, ITAR is considered a cornerstone of national security. It’s easy to see why: Rockets share many similarities in structure with missiles. The information on building them, down to the nuts and bolts, becomes something to be protected.

Their exports are closely monitored. It’s so highly guarded, in fact, that NASA and Northrop Grumman, a major local employer in both space and defense, declined to comment on ITAR and foreign employment for this story.

The space industry has pushed back against the regulations in recent years, saying it’s stifling growth. In 2014 and 2017, companies successfully lobbied Congress to relax some of the rules surrounding the export of satellite technologies overseas.

Speaking at the International Astronautical Congress in Mexico in 2016, SpaceX founder Elon Musk, who is South African and immigrated to the U.S. through Canada, said he’d have a more international workforce if not for ITAR restrictions.

Musk got his U.S. citizenship through an H-1B visa, one of the only ways that graduate-level international students can work in the country. To obtain the visa, which is awarded to 85,000 students annually, they must be sponsored by an employer.

In fiscal years 2016 and 2017, students in the computer technology and engineering fields accounted for nearly 78 percent of all approved H-1B petitions, according to a report from U.S. Citizenship and Immigration Services. But while the demand for students trained in STEM fields is high, it hasn’t yet translated to a more aggressive approach by space companies to further relax ITAR regulations.

Through the office of ranking member Florida Sen. Bill Nelson, the U.S. Senate Committee on Commerce, Science and Transportation, which oversees the space industry, said it’s not aware of any efforts by space companies to lobby the administration or Congress to further loosen restrictions that would allow them to hire more foreign nationals.

But as the industry continues to grow, particularly locally, companies may need to reevaluate that approach, said Phil Larson, a space policy adviser to former President Barack Obama.

“It’s great to see the boom of launches and landing and manufacturing happening on the Space Coast,” Larson said. “ … [It’s] ripe for that industry to continue to grow and it’s an exciting time, so it will be important to make sure the right policies are in place so the right people can get in these positions.”

In Brevard County, unemployment hovered as low as 2.9 percent in September, a remarkable feat for an area that not even a decade ago was suffering from unemployment as high as 11.8 percent. With demand for workers high, recruitment offices like CareerSource Brevard have had to go out of state to find employees. Apprentice and certification programs have cropped up to fill the employment gap.

But foreign students currently in the county, like Shirshekar, have few options.

He could go into Florida Tech’s Optional Practical Training program post-graduation, said Jackie Lingner, director of international student and scholar services at Florida Tech, but not one of the about 600 students currently in the program has gotten a job in a space-related company.

He could leave the field altogether while he tries to get his green card and then waits at least another five years for his U.S. citizenship.

He could marry an American or hope to get one of the coveted H-1B visas.

But Dona Gaynor, director for career management services at Florida Tech, said some companies choose, as a matter of policy, not to sponsor students. H-1B visa sponsorship could cost a company several thousand dollars depending on lawyer fees. Gaynor said she suggests students look into smaller companies and those with commercial contracts, or teaching positions for students with advanced degrees.

“Many of them understand the reasons why there are restrictions, but it is frustrating for them,” Gaynor said.

Seward Forczyk, who has worked with several international students in the same predicament, said she worries that “by limiting our diversity, we are actually limiting our ability to lead.

“[The students] want to stay here because the United States is the leader in space,” she said. “It’s the American dream, right? That’s the ideal we strive for — that people can come here and make it.”