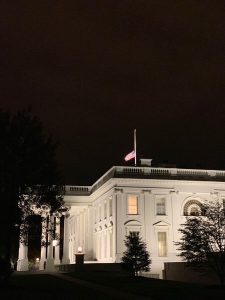 President Donald Trump ordered flags at federal buildings throughout the United States to be flown at half-staff in “solemn respect” for the shooting victims at a Pittsburgh synagogue.

Trump issued the proclamation late Saturday, shortly after returning to Washington from speaking at the Future Farmers of America convention in Indianapolis and a campaign rally in Murphysboro, Illinois.

In the proclamation, Trump called for the flags to be lowered until Oct. 31. Earlier in the day he told reporters he would travel to Pittsburgh, but offered no details.