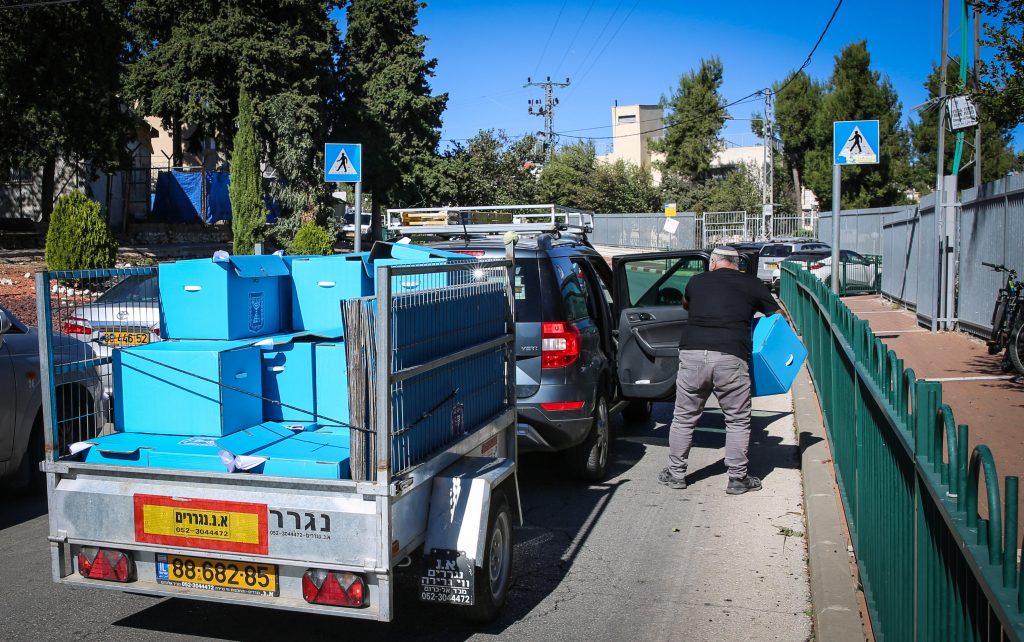 On Tuesday, Israelis will be casting their votes in municipal elections across the country in what has been a particularly heated campaign in some areas.

The mayoralty of major cities and small towns, from Yerushalayim and Tel Aviv to regional councils in Yehudah and Shomron and Druze councils on the Golan Heights will be up for grabs.

Turnout in local elections has historically been much lower than in the national campaigns, 51.9 percent overall in 2013, with as low as 28.7 percent in Tel Aviv-Jaffa; 36.1 percent in Yerushalayim. But this year officials are hopeful that a new law giving workers the day to vote (with pay) will boost civic participation.

Some 6.6 million Israelis are eligible to vote for 251 city, town, and regional councils, according to Interior Ministry figures. They will cast two ballots: one for mayor, and another for the party list they wish to represent them on their local council. If no single mayoral candidate receives over 40 percent of the vote on October 30, a runoff of the two with the most votes will be held on November 13.

In all, no less than 3,400 political party lists are vying for control of the local governments, most of them unaffiliated, or only loosely, with the major national parties.

Here is a glance at some of the races in the major cities and the key chareidi communities:

Tel Aviv mayor Ron Huldai, 74, is running again after 20 years as incumbent. His deputy Asaf Zamir, 38, of the Rov HaIr faction, has mounted a serious challenge, but still is behind in the polls of 6-10 points.

The chareidi community is represented by two parties, Shas and Ma’aminim (Agudas Yisrael-Yachad).

Haifa is expected to be a close race. Yona Yahav, 74, has been mayor 2003, and is trying to fight off challenges from younger politicians,  David Etzioni, a lawyer and former finance minister adviser and  Einat Kalisch Rotem ,are the  challengers.

Yehiel Lasari, the incumbent, has been leading in the polls against Shimon Katznelson, Eli Lachmani and Boris Gitterman.

Moshe Abutbul, the chareidi mayor, is seeking to win another term with the backing of Agudas Yisrael, Degel HaTorah and Shas. According to the polls, the race is neck and neck between the Abutbul and his national-religious challenger Dr. Aliza Bloch.

Etz-Bnei Torah is running a party in Beit Shemesh as well as supporting a candidate for mayor.

Current Mayor Yisrael Porush is running for a second term. The Degel HaTorah/Shas candidate for mayor, Yitzchak Pindrus, was disqualified by the High Court for not meeting residency requirements.

Yaakov Gutterman, who has served as mayor since 2000, is running once again and is expected to win comfortably.

Mayor Miriam Feirberg, who has served in the post for over 20 years, is running yet again. There are several other candidates, including former MK Yoni Chetboun.

Over 10 parties are running for the council, including Gal (Gimmel-Laniado) which is Agudas Yisrael and Degel HaTorah together, and Shas.

Mayor Itzik Braverman is running for another term. There are several other candidates, the most serious of whom is Rami Greenberg.

The council, which has grown from 27 to 29 seats, will be contested by 10 parties. The chareidi community is represented by UTJ and Shas.

Mayor Ilan Shochat, who has served as mayor since 2008, is running for a third term. A number of candidates running against him include Councilman Nachman Gelbach, who has the backing of Agudas Yisrael; Councilman Eliezer Lazar, Shuki Ohana (Likud) and Yishai Maimon (Kulanu).

The chareidi community is represented in Tzfas by three parties: Agudas Yisrael, Degel HaTorah and Shas.

Mayor Rachamim Malul is running for a second term. Over 10 parties are running for the city council, including Agudas Yisrael, Shas, Degel HaTorah and Jewish Home.

After much negotiations, current Mayor Avraham Rosenthal will remain in his position, and will appoint Yitzchak Ravitz, a Degel HaTorah candidate who moved from Beitar, as his deputy. Rosenthal will resign midterm and Ravitz will serve as mayor.

Since no parties submitted lists, there will not be municipal elections for the local council.

The parties running for the council are UTJ, Shas, Telalei Orot and Torat Emanuel. Agudas Yisrael has submitted a candidate for mayor, Eliyahu Gafni.

As in every election in Israel, the various sectors of the chareidi community will vote in accordance with the ruling of their rabbinic leaders.