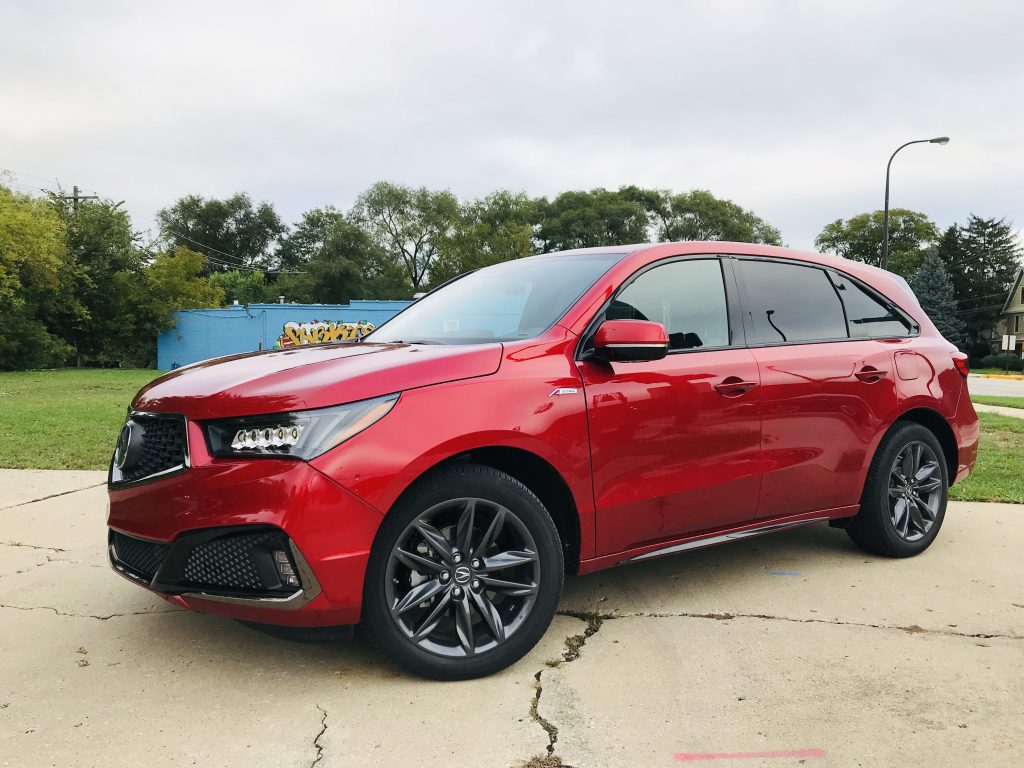 Acura is refreshing its best-selling MDX a year before it’s due for a redesign: The three-row crossover segment moves pretty fast, and Acura wants consumers to look at the MDX yet again.

For the first time in three generations, Acura’s flagship SUV gets a sport element to its luxury utility with the A Spec trim level.

A Spec blacks out the usual chrome trim, uses a buffer lower fascia, features a sleeker rear spoiler, blows up the exhaust tips into cannonlike cylinders and replaces 18-inch wheels with wider 20-inchers.

None of it makes the 290-horsepower V-6 engine any quicker, but the cosmetic packaging makes this not-minivan look all the less like a minivan substitute. It also lets Acura charge an extra $3,500.

Functionally, the nine-speed transmission has been smoothed out so it starts in second gear unless it’s in sport mode or towing situations. It won’t shift as early, so it feels more familiarly like a six-speed. The Super-Handling All-Wheel-Drive system uses torque vectoring to send up to 70 percent of the 267 pound-feet of torque to the rear axle, where it is then distributed up to 100 percent to either rear wheel. Torque vectoring in this case means that if one rear wheel slips or is stuck in snow, the system shifts power to the grounded wheel for maximum grip. It is no performance component, but it is a nice assurance, unless you’re trying to hit the apex at the intersection of your fantasy and your reality.

Standard on the MDX is Acurawatch, which includes adaptive cruise and other advanced driver-assistance systems. It’s a deal, especially since the upmarket luxury marques option all the tech all the time.

Adaptive cruise goes down to a stop, then the driver taps the accelerator to resume it. The gap between the lead car and the MDX is large, even in the shortest setting, and the automatic braking is smooth for the most part. The acceleration can be slow and uneven. The lane keep system centers the MDX in the lane as it reads the lane lines. It’s easy to use and reassuringly comfortable and convenient.

The multimedia controls take getting used to, as in any car with two screens. The top embedded display screen is for navigation, phone and vehicle info. Toggle through those options with buttons below the small lower touchscreen, then use a controller dial on the center stack to go through the menus and to conveniently zoom in or out on the map.

The lower touchscreen, which is equally small and narrow, is for audio and climate. It’s not as refined and unified as the redesigned RDX, but we got the hang of it after a few drives.

Third-row seats each use a handle in the center of the seat back to lower or raise it. It requires quite a lean to get them back up. Straps would be less of a reach, or latches in the side of the cargo area. The handles do flip the headrests, though, which is good.

Getting in and out of the third row couldn’t be easier: from the third row, push a button on the top of the middle seat and the seat back folds and slides forward. Same thing with the button on the side of the seat when getting in. Kids of just about any age can do it themselves. Now to just get them to buckle. Third row is cramped and narrow but much larger than Lexus RX 350L.

A Spec trim in the 2019 Acura MDX is sharp in the way of superficial things, but the technology package and SH-AWD that comes with A Spec are more important. But Ferris might not think it is so choice. The overall package is solid, and the cosmetic flourishes give it a little something.