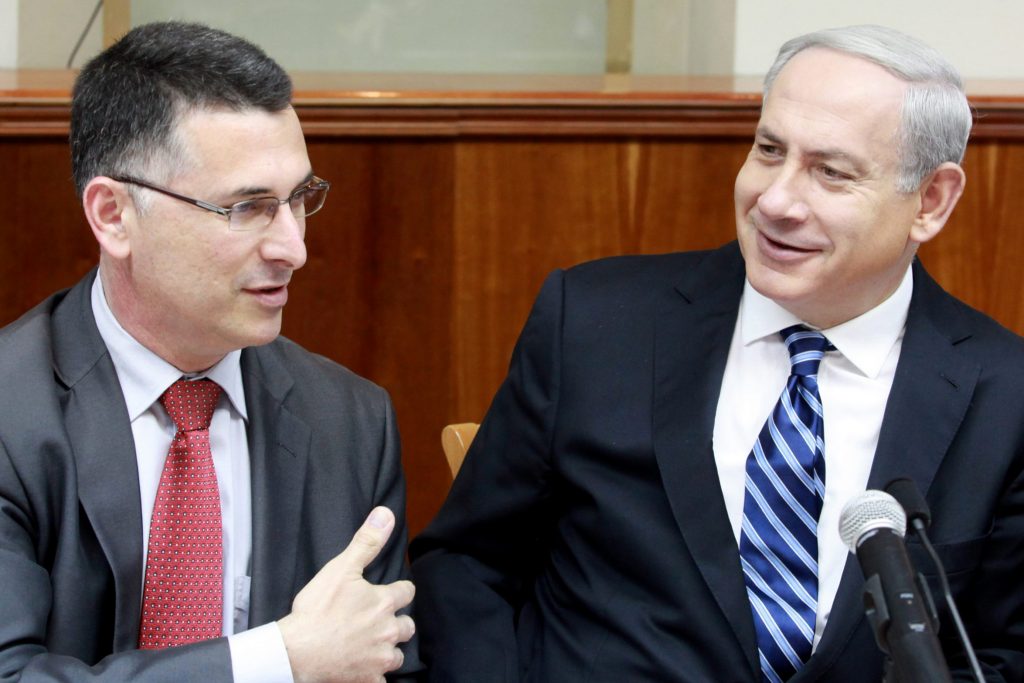 The allegations by associates of Prime Minister Binyamin Netanyahu that former MK and minister Gideon Sa’ar was trying to undercut him refused to die down Thursday – and actually took on a harsher tone, as both Sa’ar and officials close to Netanyahu slammed each other, accusing each other in turn of treachery, paranoia, lying and other negative phenomena.

Speaking on Army Radio Thursday, Sa’ar called Netanyahu’s accusations that he had tried to persuade President Reuven Rivlin not to choose Netanyahu to form the next government a lie, and “the crossing of a red line. Netanyahu is surrounded by plotters and conspirators, and this is poisoning the lifeblood of the Likud.”

In response, Yonatan Orich, a spokesperson for Netanyahu, called Sa’ar’s claims “hysterical. A person who calls the prime minister a ‘liar’ has clearly decided to commit suicide of his standing in the Likud.” Army Radio quoted an official close to Netanyahu as saying that Sa’ar’s “hysterical response proves that he has indeed tried to undercut the prime minister, operating against the will of Likud members.”

The issue came to the fore Wednesday in an analysis published by Yisrael Hayom on why the question of early elections has dropped out of the headlines. In the analysis, the newspaper cited senior Likud sources as saying that Netanyahu had planned to break up the Knesset and call early elections – but decided against it, after hearing from advisers that Rivlin might not appoint him to form the government if the Likud won a plurality of seats in the plenum, as polls predict. According to Israeli election laws, the president imposes the task of forming a government on the individual who is most likely to form one. Generally, this is the head of the list with the largest number of seats in the Knesset, but he is not required to do so.

Given the bad blood between Netanyahu and Rivlin, the analysis said – Rivlin is said to blame Netanyahu for attempting to prevent him from ascending to the presidency – Netanyahu, the newspaper said, decided not to break up the government at this time, preferring to figure out a way to ensure that Rivlin not be able to perform a “runaround” of his forming a government. “It’s not the draft law and it’s not Gaza that is preventing early elections,” the analysis said. “It’s Rivlin, and Netanyahu is determined to do something about it.”

Later, the newspaper said, Likud sources named former Likud MK and minister Gideon Sa’ar as being responsible for the efforts to convince Rivlin not to appoint Netanyahu as the organizer of the government. Sa’ar, too, has hard feelings for Netanyahu, whom he blames for keeping him out of the Knesset. Speaking Thursday, Sa’ar said that “Netanyahu has clearly marked me for attack and has spread lies about me. I demand that he present the evidence of his claims. This will not weaken me as he hopes, it will just strengthen me.”

In a social media post, Likud MK Yehuda Glick called on both parties to back off. “Prime Minister Binyamin Netanyahu is the head of the Likud and he has the full trust of the Likud membership. He has a great record of accomplishment during his years in office. Gideon Sa’ar, meanwhile, is an important element in the party and is greatly appreciated by his colleagues. What has historically damaged the Likud has been the internal conflicts we have faced. I call on both parties to take a step back, and find a way to respect each other and drop this disagreement, the sooner the better.”