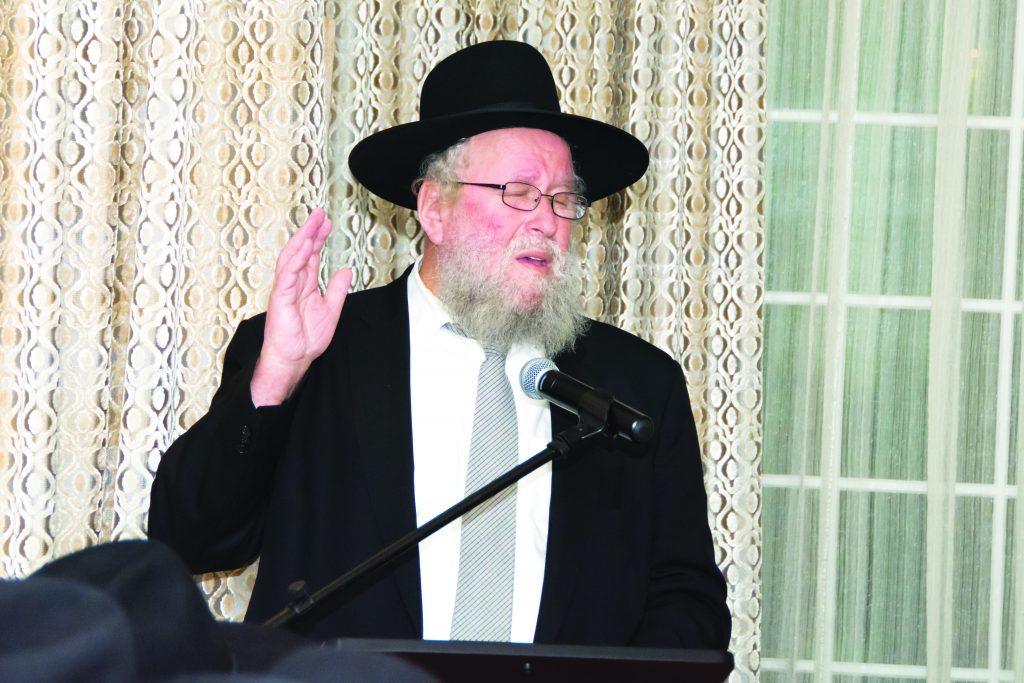 The weekend was very successful, as events were well attended and well received by community members. The Roshei Yeshivah and Torah Umesorah representatives spoke in several venues throughout the weekend, including in shuls and in private homes, delivering inspiring messages on many chinuch-related topics.

They also emphasized the importance of the work of Torah Umesorah, as the organization has significantly raised the level of chinuch in America throughout the recent decades, through various programs including mentoring and teacher training, principal mentoring, workshops, programs for school mashgichim, programs to increase emunah in our talmidim, and programs to increase an appreciation of tefillah.

Shabbos was enhanced by the participation of the Yedidim Choir, which participated in several events and sang beautiful zemiros.

On Leil Shabbos, oneg Shabbos gatherings were held in different parts of the community. In Peterson Park, Harav Elya Brudny addressed an oneg Shabbos held at the home of Mr. and Mrs. Shimmy Webster. Harav Brudny pointed out that during the Dor Haflagah, Hashem separated people by giving them 70 languages and spreading them throughout the world. That was meant to be beneficial for mankind. However, today, with the advent of the internet, the world has become smaller, everyone knows what everyone else is doing, and that is not a healthy way of life.

In West Rogers Park, Harav Landau addressed an oneg Shabbos at the home of Mr. and Mrs. Aaron Topper. He related sippurei tzaddikim, and emphasized the importance of having a chevrah, and being a part of a social group of friends. While on the teivah, Noach was lacking this chevrah, but that is an important part of Klal Yisrael’s society.

During a shiur for ladies on Shabbos afternoon, Rabbi Shmuel Yaakov Klein discussed, “Jewish Integrity Under Fire,” and pointed out many challenges to Jewish chinuch and sensitivities posed by Western culture. He asserted that one needs to be vigilant and promote the proper mindset to our children.

Later Shabbos afternoon, Rabbi Nojowitz addressed a special seudah shelishis at Adas Yeshurun. He related a mashal given by Harav Leib Chasman, zt”l, Mashgiach of the Chevron Yeshivah, who explained the Chazal, “Chavivin Yisrael sh’nikri’u banim laMakom.” He compared Klal Yisrael to a poor person who does not realize that there are millions of dollars hidden under his floor boards. Although he is not aware, in reality, he is a gvir.

They emphasized that the zechus for the task of educating a generation of Klal Yisrael is gargantuan, and that should be enough to fortify their hearts.

At the women’s melaveh malkah, Rabbi Shmuel Yaakov Klein described the legacy of what chinuch has accomplished in America, in raising generations of shomrei Torah u’mitzvos. Harav Shraga Feivel Mendlowitz, zt”l, had a vision to avoid a spiritual Holocaust, R”l, and took up the charge through Torah Umesorah.

When he was challenged, Harav Mendlowitz would declare, “What does it bother you if there are 50,000 children in the United States who will know how to say Shema each morning? “

“Imagine if he would have known that within less than 75 years, there would be 300,000 children saying Shema each morning,” Rabbi Klein asserted.

Also on Motzoei Shabbos, the Roshei Yeshivah joined the Father and Son Grand Finale Melaveh Malkah which took place at The Chicago Center for Torah and Chesed.

In summing up the Shabbos, Rabbi Nojowitz shared, “We always feel the need to renew our connection with communities across the continent, large and small. This is what our Shabbos of Chinuch was all about, touching the hearts of individuals and mosdos alike in the Chicago kehillah.”