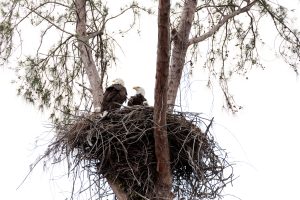 The Fish and Game department told the Concord Monitor that 70 eagles reached fledging age over the summer, the most ever recorded. Eagle chicks are considered fledged at about 12 weeks old, when they begin to fly away from and then return to their nest.

Officials say since bald eagles returned to New Hampshire in 1988, a total of 497 chicks have fledged from nests located across the state.