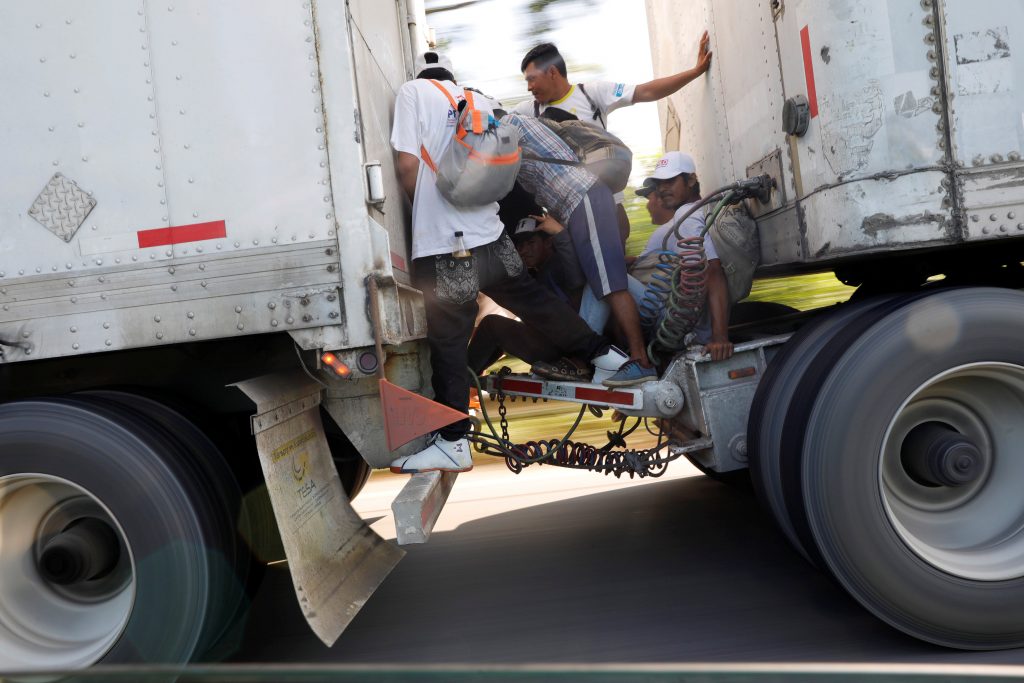 As thousands of Central American migrants renewed their trek Wednesday through Mexico toward the hoped-for, but still far-distant U.S. border, the physical toll was beginning to show in sickness and exhaustion, especially among the children toddling along, being pushed in strollers or carried in the arms of adults.
And for their parents, it was their hope for their children’s futures, and fears of what could happen to them back home in gang-dominated Honduras, that were the main motivation for deciding to leave in the first place.

Honduras has a homicide rate of about 43 per 100,000 inhabitants, one of the highest in the world for any country not in open war.

On Wednesday, Giron was crammed with her children, 3-year-olds Justin and Nicole, and 5-year-old Astrid into the seat of a motorcycle taxi meant for only two passengers. Also perched in the perilously overcrowded motorbike were Reyna Esperanza Espinosa and her 11-year-old daughter, Elsa Araceli.

Espinosa, a tortilla maker from Cortes, Honduras, said there was no work back home and “that’s why we decided to come here, to give a better future for our children.”

As a column of migrants on foot trekked past, about half a dozen Mexican minibuses were pulled over near the town of Escuintla at a police roadblock.

Officers ordered all Central Americans removed from the vehicles — even though they had paid their fares.

It was not immediately clear if the tactic was part of a broader effort to restrict the caravan’s progress. The migrants were not detained but had to continue the journey on foot in 90-degree heat, unless they could find another ride.

Such caravans have taken place regularly, if on a smaller scale, over the years, but President Donald Trump has seized on the phenomenon this year and made it a rallying call for his Republican base ahead of Nov. 6 midterm elections.

Trump has blamed Democrats for what he said were weak immigration laws and claimed that MS-13 gang members and unknown “Middle Easterners” were hiding among the migrants. He later acknowledged there was “no proof” of the claim Middle Easterners were in the crowd. But he tweeted Wednesday that the U.S. “will never accept people coming into our Country illegally!”

Associated Press journalists traveling with the caravan have met throngs of Hondurans, as well as Guatemalans, Salvadorans and Nicaraguans, but no one from the Mideast. Many were young people traveling with their families. Again and again, they have cited poverty and violence in their countries as reasons for leaving.

The migrants set out before dawn Wednesday from the far-southern Mexican city of Huixtla, hoping to trek another 45 miles to the town of Mapastepec. That would still leave them at least 1,000 miles from the nearest U.S. border crossing at McAllen, Texas, and possibly twice as far away if they head to the Tijuana-San Diego crossing.

Another, smaller caravan earlier this year dwindled greatly as it passed through Mexico, with only about 200 making it to the California border. Those who do make it into the U.S. face a hard time being allowed to stay; U.S. authorities do not consider poverty, which many cite as a reason for migrating, in processing asylum applications.

The size of this caravan — estimated by the United Nations at more than 7,000 strong — appeared basically undiminished as the migrants got their start in darkness cut by occasional flashlights or the spotlights of police escorting them.

Still, day after day on the road had clearly worn on the migrants.

Rosa Duvon of Cofradia Cortes, Honduras, pushed her baby son and nephew, both named Daniel, in a rickety donated baby carriage over the potholed road at 5 a.m.

“This thing is going to die,” she said, pointing to a wobbly back wheel. Still, she vowed to keep going.

In worse condition was Maria del Carmen Mejia of Copan, Honduras, who was already sweating profusely before dawn. She carried 3-year-old Britany Sofia Alvarado in her arms, and clutched the hand of 7-year-old Miralia Alejandra Alvarado, also sweaty — and fevered.

Still, she pledged to go on. “I’ve walked a long way. I don’t want to return. I want a better future for my children.”

Nearly 1,700 migrants have already dropped out and applied for asylum in Mexico and hundreds more have accepted Mexican offers to be bused back to their countries. The numbers are likely to thin further as people decide to take their chances in Mexico or strike out on their own.