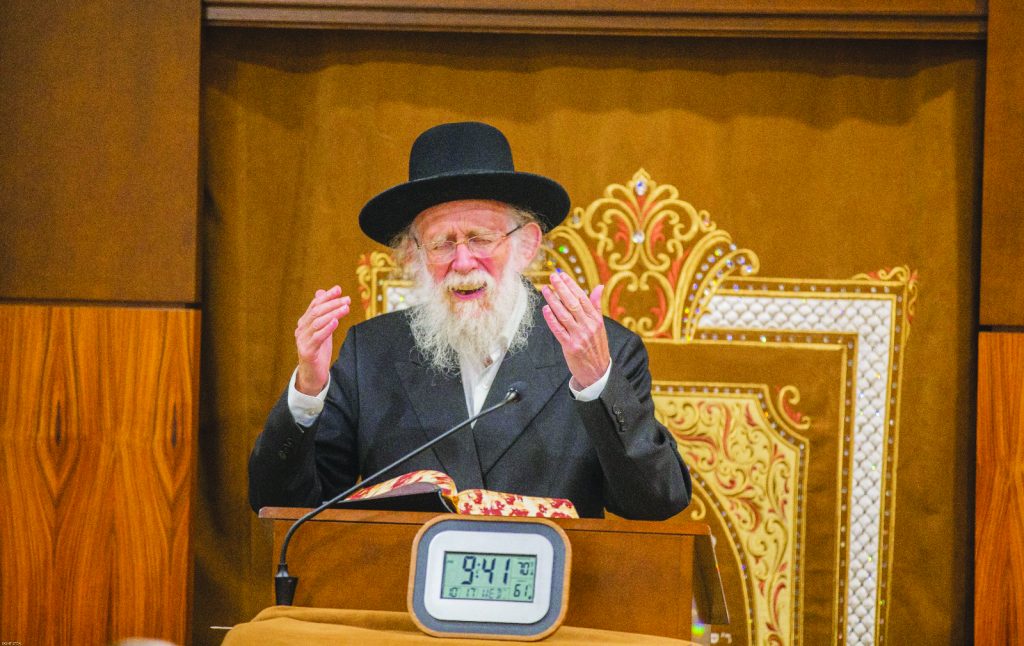 During the afternoon, Rav Galai met with tens of community members, giving them chizuk and brachos.

Later, Rav Galai visited the TBMC (Talmudo Biyado Mishnayos Club) group, which is held in the kollel. In this special program, approximately 50 boys come each day after yeshivah to learn Mishnayos, in a special format. The boys had a chance to say shalom aleichem to the Rav, and received a brachah and a candy in return.

In the evening, Rav Galai delivered a shiur in the kollel. When he first entered the kollel during night seder, and saw so many sitting and learning, he was filled with nachas, and apologized for interrupting the learning for the drashah.

Quoting the well-known words of “Kad yasvin Yisrael… — when the Yidden sit…,” Rav Galai described how much nachas Hashem gets from seeing Klal Yisrael engaged in limud haTorah.

The maamar continues, “They forget their tzaros and are busy with my Torah.” Rav Galai compared this to someone whose father is making a simchah. The son will cancel everything else on his schedule in order to attend. This is what it is like when Klal Yisrael forgets their tzaros and focuses on limud haTorah.

Rav Galai emphasized that we must recognize that everything we have is due to the chessed of Hashem. He told a story of a man who was in an accident and was unable to get out of bed for over three months.

When he was finally discharged from the hospital and was able to go to shul, he placed his hospital band in his tallis bag, so that he would always remember to be thankful to Hashem that he was able to come to shul. Once in shul, he recited “Yehei shmei Rabbah,” with great simchah.

Rav Galai asserted that the main thing that Hashem wants is our ratzon, our desire, that we should want to learn. If Hashem sees this ratzon, then He will help us to understand, and we are guaranteed to have hatzlachah.

He quoted the Chazal that states that when Moshiach comes, the nations of the world will come and try to claim a share in the Geulah, insisting that they did so much for the benefit of Klal Yisrael.

The Brisker Rav, zt”l, explains that in truth, they did build many buildings, highways and bridges for the sake of Klal Yisrael, however, that was not their intention, their original ratzon. Rav Galai reiterated that Hashem wants our ratzon, and if Hashem sees that we have the ratzon to learn, He will help us succeed.

Rav Galai concluded by emphasizing the nachas that he got from seeing so many people sitting and learning, and bentched everyone that Hashem should help them remember that we live every second due to His chessed.

We should remember that Hashem is waiting for more Torah and more chessed, and we should be able to serve Him b’ahavah.