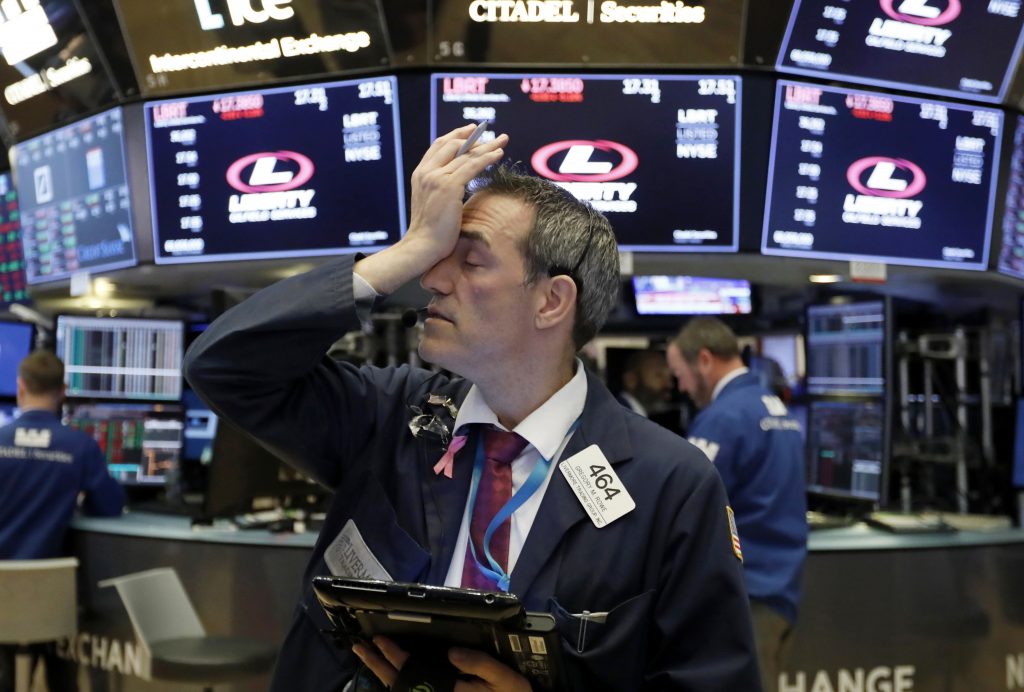 The latest wave of selling came as investors grew unsettled by slowing economic growth in China and the costs of President Donald Trump’s aggressive trade policies.

China’s economy grew 6.5 percent from July to September, the slowest pace since early 2009. The world’s second-largest economy was cooling even before the outbreak of a tariff war with Washington. That contrasts with the momentum of the U.S. economy. The government is expected to say Friday that the U.S. economy grew by 3.3 percent in the third quarter, after growing by 4.2 percent in the second quarter.

The strong U.S. economy has helped power earnings growth for companies in the S&P 500. While those companies are expected to deliver 21.9 percent earnings growth for the third quarter, investors are concerned about future growth amid rising inflation, interest rates and uncertainty over trade.

Caterpillar’s stock price tumbled after the heavy equipment manufacturer warned that Trump’s taxes on imported steel were driving up production costs. The stock plunged 7.4 percent to $119.18.

Technology companies, banks and industrial stocks led the slide on Wall Street, which followed a steep sell-off in Chinese and other global markets.

Decliners outnumbered gainers on the New York Stock Exchange by a ratio of nearly 8 to 1.

Bond prices rose, sending the yield on the 10-year Treasury note down to 3.13 percent from 3.19 percent late Monday.

The Chicago Board Options Exchange’s volatility index, known as the VIX, or fear index, jumped 14 percent to its highest level in two weeks.

Markets have been rattled in recent weeks by increased worries over the impact that rising interest rates, inflation and the escalating trade dispute between the U.S. and China may have on Corporate America.

The two countries are locked in a dispute over U.S. allegations that China steals U.S. technology and forces U.S. companies to share trade secrets in exchange for access to the Chinese market.

Traders bid up shares in McDonald’s after the fast-food chain reported third-quarter results that topped analysts’ forecasts. The stock gained 5.7 percent to $176.07.

Close to 17 percent of companies on the broad S&P 500 index have reported earnings for the third quarter, and over half of them did better than expected.

The decline in oil price weighed on energy stocks. Halliburton lost 4 percent to $34.95.

In Europe, the focus was on Italy’s dispute with the European Union over its plan to ramp up public spending. The plan expands its targeted deficit to 2.4 percent of GDP next year, three times more than promised by the previous government.

The European Union is worried that this would prevent Italy from lowering its debt, which is second only to Greece among its members.