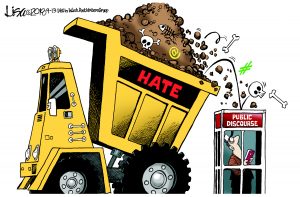 “When they go low, we go high” was coined by former first lady Michelle Obama at the 2016 Democratic National Convention. She was well acquainted with low-going from her husband’s first campaign for president eight years earlier, when he was accused of being a foreign-born radical; and she, of hating America and planning to sow societal discord.

All she ended up sowing were vegetable seeds in the South Lawn garden (where Mrs. Trump has graciously carried on her predecessor’s tradition of hosting children to help pick ripened veggies).

The motto Mrs. Obama planted in the political garden in 2016, though, during the most negative presidential campaign in recent memory, didn’t bear much fruit. Hillary Clinton lost, and bellicosity in subsequent political campaigns spread like poison ivy.

And not only among Republicans. The aforementioned Mrs. Clinton recently said that “you cannot be civil” with the Republican Party because it “wants to destroy what you stand for, what you care about.”

And former Attorney General Eric Holder offered his own riff on Mrs. Obama’s credo, suggesting that “When they go low, we kick them.”

Then there was Dallas County Commissioner John Wiley Price, a Democrat, who sent out a mailer with photos of President Trump and Adolf Hitler with an “equals” sign between them.

And so it goes.

Ah, but then we are graced with the likes of Amy McGrath, who is challenging the incumbent, Andy Barr, for Kentucky’s 6th Congressional District seat.

Never mind which candidate is the Democrat (okay, Mrs. McGrath; but she’s happily married to a Republican), or even which is better qualified (no opinion). Regard only the resplendent fact that the lady has forsworn negative ads.

You read that right. Despite the fact that her battle is uphill, that her district favored President Trump by 15 percentage points and that Mr. Barr crushed his last Democratic opponent, Mrs. McGrath has refused to attack him or his policies.

“It’s time for a new generation of leaders who aren’t afraid to go against the grain and run a campaign that the voters can be proud of,” she told the Lexington Herald Leader.

“I refuse to win,” she wrote in a social media post “at any cost.”

Mr. Barr, regrettably, has not reciprocated the blow for civility. Although Mrs. McGrath is a former fighter pilot and lieutenant colonel in the Marine Corps and holds moderate positions on all issues, her opponent and his supporters have launched verbal and video salvos at her, at times blatantly misrepresenting what she stands for.

Campaigning for Mr. Barr recently, President Trump declared that Mrs. McGrath is “an extreme liberal chosen by Nancy Pelosi, Maxine Waters and the radical Democratic mob,” and that she “supports a socialist takeover of your health care; she supports open borders; she needs the tax hikes to cover the through-the-roof garbage you want no part of.”

Her response: “Mr. President, you clearly don’t know me. Yet.”

Whether the optimism in that “yet” will prove to have been justified is not knowable. But, examining the candidate’s actual positions on health care, immigration reform and taxes, one sees her first sentence’s point.

Social scientists say that there is little evidence that attack ads yield more votes than informational ones, but campaign strategists and conventional wisdom clearly feel that they do.

Among the “biological attunements,” or natural human inclinations, the Torah warns us against is the acceptance or propagation of negative portrayals of others. Leaving aside the particular halachic parameters of lashon hara, hotzo’as shem ra and rechilus, they are unarguably pernicious things in any context.

And they derive from pernicious places, small-minded hatreds and prejudices. When comparisons of President Trump to Hitler are publicly offered or partisan players gleefully declare “owning the libs” as their highest aspiration, we as an electorate, and a society, have moved from holders of reasoned, if different, views to crazed boxers in a ring, trying to out-bloody one another.

I don’t know which candidate will be the better representative of Kentucky’s 6th Congressional District. Either, I suspect, will probably do a good job. But whoever emerges the victor in that important race — the majority party in the House, of course, is in play — it is heartening that a candidate opted to buck the trend of seeing the debasement of an opponent as a necessary part of the path to success.