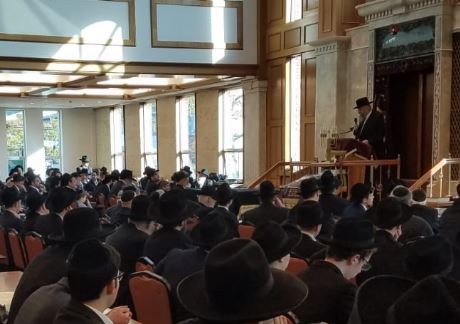 Klal Yisrael joins the Far Rockaway community in mourning the passing of Harav Eliyahu Pesach Rominek, zt”l, one of the elder talmidei chachamim of the New York City area.

Born and raised in the Brownsville and Williamsburg neighborhoods, his destitute parents were moser nefesh to send him to yeshivah, which was not the accepted practice at that time. Young Eliyahu went to Yeshiva Rabbeinu Chaim Berlin in Brownsville, where he developed a close relationship with the Rosh Yeshivah, Harav Yitzchok Hutner, zt”l.

In the late 1940s, he entered Bais Medrash Govoha to learn under Harav Aharon Kotler, zt”l, who held him in high esteem. He remained for one and a half years, after which he married Hadassah Wohlgelernter, the daughter of Rabbi Shalom Pinchas who served as a Rav in Seattle. (Rabbi Wohlgelernter asked Harav Yaakov Kaminetsky to substitute for him when he had to take a leave of absence, and this eventually led to his appointment to a full-time position in Toronto. This ultimately allowed him to bring his family to America, which saved them from the fate of many European Jews during the holocaust. Rav Yaakov attributed the rescue of his family to the kindness of Rabbi Wohlgelernter.)

Rav Rominek served as a Rosh Mesivta in Yeshiva Rabbeinu Chaim Berlin from 1949 until 1969, and was a community Rav in Laurelton, N.Y. as well. During his tenure, he helped many unaffiliated Yidden grow closer to Yiddishkeit.

In 1975, when the Laurelton community began to wane, the Rominek family moved to Far Rockaway, where Rav Rominek founded Yeshiva Ohavei Torah, which primarily serviced retirees by offering them shiurim. Rav Rominek delivered many of these classes, which began in Congregation Kneseth Israel, aka the White Shul, and later relocated to Congregation Shaarey Tefila. Through this, many older Yidden spent a substantial part of their day involved in learning Torah, a concept that has been replicated in many communities since then.

Rav Rominek was involved in helping many people solve their daunting problems, using his dedication and broad knowledge of halachah to engage in knotty issues which others shied away from. He was known as a person of truth, and displayed immense courage to tackle difficult communal concerns, never relenting until they were dealt with properly. He often remarked that Harav Aharon Kotler was his role model in this struggle.

At times, when dealing with cases where a husband refused to release a wife who deserved a get, he consulted with Harav Shlomo Zalmon Auerbach, zt”l, and Harav Yosef Sholom Elyashiv, zt”l, who held him in high regard.

Harav Don Blumberg, his son-in-law who serves as Rosh Kollel of Kollel Yisroel Shimshon of the West Side and Rosh Yeshivah of Yeshivas Ohel Yaakov of Monsey, told Hamodia, “Just two weeks ago, he told me a vort on a difficult topic. He was constantly engrossed in learning, always devoted to limud haTorah.”