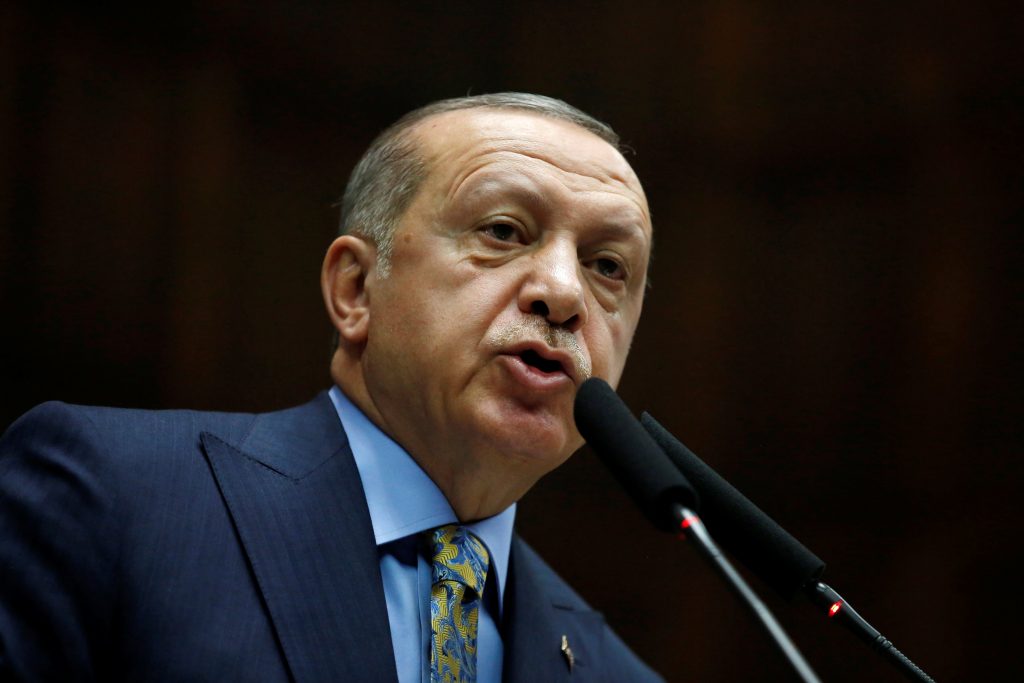 Turkish President Tayyip Erdogan on Tuesday dismissed attempts by Riyadh to blame Jamal Khashoggi’s “savage” killing on rogue operatives, saying the person who ordered the death of the prominent Saudi journalist must “be brought to account.”

In a speech to parliament about a case that has sparked outrage around the globe, Erdogan did not mention Crown Prince Mohammed bin Salman, who some U.S. lawmakers suspect ordered the killing.

But he said Turkey would not complete its investigation into Khashoggi’s death until all questions were answered.

“Intelligence and security institutions have evidence showing the murder was planned…. Pinning such a case on some security and intelligence members will not satisfy us or the international community,” he said.

Erdogan said the whereabouts of Khashoggi’s body were still unknown and he demanded Saudi Arabia reveal the identity of a “local cooperator” who purportedly took the body.

Erdogan’s speech coincided with the opening of an investment conference, which Western political figures, leading international bankers and company executives have boycotted because of the furor around Khashoggi’s death.

The Washington Post columnist, a sharp critic of the crown prince, the kingdom’s de facto ruler, disappeared three weeks ago after entering the Saudi Consulate in Istanbul to obtain documents for his upcoming marriage.

Turkish officials suspect Khashoggi was killed and dismembered inside the consulate by Saudi agents.

Turkish sources say authorities have an audio recording purportedly documenting the killing of the 59-year-old. Erdogan made no reference to any audio recording in his speech.

Riyadh initially denied knowledge of his fate before saying he was killed in a fight in the consulate. That version of events was greeted skeptically by several Western governments, straining relations with the world’s biggest oil exporter.

Erdogan said three operatives arrived in Istanbul the day before his killing on an apparent reconnaissance mission. The next day 15 people came to the consulate. They included security, intelligence and forensic experts, and consulate personnel were given the day off.

“Why did these 15 people meet in Istanbul on the day of the murder? We are seeking answers to this. Who are these people receiving orders from?” Erdogan said.

Representatives for the White House and the U.S. Department of State did not immediately respond to a request for comment on Erdogan’s remarks

Following the global outrage prompted by the journalist’s disappearance, President Donald Trump’s comments have varied from playing down Riyadh’s role to warning of possible economic sanctions.

Trump has also repeatedly highlighted the kingdom’s importance as a U.S. ally and said Prince Mohammed was a strong and passionate leader.

For Saudi Arabia’s allies, the question will be whether they believe that Prince Mohammed, who has painted himself as a reformer, has any culpability. King Salman, 82, has handed the day-to-day running of Saudi Arabia over to the 33-year-old prince.

President Trump spoke with Prince Mohammed on Sunday. He told reporters on Monday that he had teams in Saudi Arabia and Turkey working on the case and would know more about it after they returned to Washington on Monday night or Tuesday.

CIA Director Gina Haspel was traveling to Turkey on Monday to work on the Khashoggi investigation, two sources familiar with the matter told Reuters.

On Saturday, Saudi state media said King Salman had fired five officials over the killing carried out by a 15-man hit team, including Saud al-Qahtani, a top aide who ran social media for Prince Mohammed. Riyadh is also working with Turkey on a joint investigation

Erdogan spoke as hundreds of bankers and company executives joined Saudi officials at a palatial Riyadh hotel for the Future Investment Initiative, an annual event designed to help attract billions of dollars of foreign capital as part of reforms to end Saudi dependence on oil exports.

More than two dozen high-level speakers have pulled out of the event following the outcry over Khashoggi’s killing. Many foreign investors see a risk that the case could damage Riyadh’s ties with Western governments.

Despite the furor, the world’s largest oil exporter says it expects to sign deals worth more than $50 billion in the oil, gas industries and infrastructure sectors on the opening day with companies including Trafigura, Total, Hyundai, Norinco, Schlumberger, Halliburton and Baker Hughes.