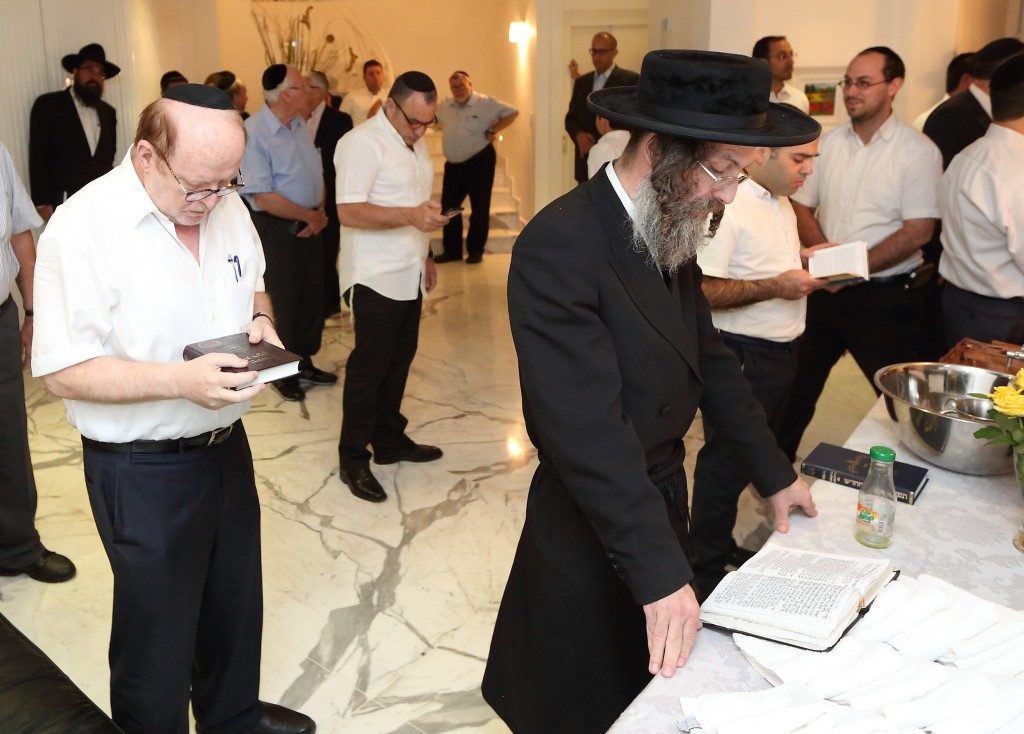 The living room in the elegant home on Yona Street in Ramat Gan was filled with people. One after another, residents of the neighborhood gathered for a special evening. It was two years ago, on the yahrtzeit of the Ohr Hachaim Hakadosh, and the host, Reb Yehudah Amar, had invited his friends to come for a yahrtzeit seudah. At the head of the table sat the mashpia, Harav Meilech Biderman.

The host and Rav Meilech were longtime friends. Yehuda Amar spent a lot of time in his younger years with Rav Meilech’s father, the Lelover Rebbe, and even funded the Chevras Tehillim of the chassidus for many years.

Now, in honor of the yahrtzeit, he invited Rav Meilech to come and speak a bit with his chevrah. Among those seated was a neighbor, Attorney Yaakov Weinroth, who was known as a brilliant legal mind and one of the leading lawyers in Israel. He never missed an opportunity to meet and listen to Rav Meilech face-to-face. “I don’t miss a Shabbos seudah with the Be’er Haparashah booklet; it gives me real oneg Shabbos,” he whispered to me a moment before Rav Meilech began to speak.

I look at him; he is a man who has seen so much. He was the lawyer for many prominent politicians and other notable clients in the nation. He represented Prime Minister Binyamin Netanyahu, President Ezer Weizmann, Ministers Avigdor Liberman, Raphael Eitan and Meir Sheetrit, the accused of the Jewish Underground, and more. He himself was on trial a few years ago, but was exonerated. When Netanyahu came to his home, the entire Yona Street was closed to traffic — yet here he was, sitting like just another person, thirstily drinking in every word.

Because that’s who he was. Above all, he was an ardent ben Torah, who loved Torah and those who learn it. He was a brilliant lawyer who was respected by the heads of the legal system as well as by the governing echelons. He wasn’t blinded and knew what his mission was, as he would say in the name of the Sfas Emes, that Yisro added a parashah in the Torah because it could have been given only by him. Each person has a mission and a destiny, and Attorney Weinroth saw his as being the link between the secular legal world and the Torah world.

He was a faithful Jewish representative and proud of his Yiddishkeit. When the former High Court president Mr. Aharon Barak raised the banner of the “constitutional revolution” in which he combined the terms “Jewish and democratic,” Weinroth declared: “Barak’s Judaism is not my Judaism.”

Even from his heights in the ivory towers, Attorney Weinroth did not forget his role: “What saddens me,” he said in a media interview, “is the loss of Jewish compassion in Israeli society. We are becoming more and more people of entitlements and obligations. We are becoming more and more a society of slogans. And amid all that, the human compassion is fading, and that is very sad.”

He was born in Ansbach, Germany, and brought with him the school of thought of Harav Samson Raphael Hirsch, zt”l, which promotes “Yafeh talmud Torah im derech eretz.” He did not miss his regular chavrusa with Rosh Yeshivas Ponevez, Harav Baruch Dov Povarsky, with whom he also worked through various ethical issues. “There is a document called Iggeres Haramban, which encapsulates his philosophical worldview into practical instructions,” Weinroth related, and noted that he studied the Iggeres every day. “Anyone who is able to fulfill its instructions, even partially, can change his entire existence.”

Indeed, he demanded and also fulfilled. He was recognized as someone with sterling middos, who rarely got angry and was easily appeased. In a recent profile, it was related that several of the litigants who worked with him remained owing him hundreds of thousands of shekels, and he, knowing their financial straits, remained silent and accepted the situation. That was in addition to his large and lesser-known acts of chessed that he performed throughout the years.

Late into the night, when Rav Meilech concluded his drashah in honor of the yahrtzeit, Yaakov Weinroth danced together with all the rest of those present, to the tune of “Ki l’Hashem hameluchah u’Moshel bagoyim.”