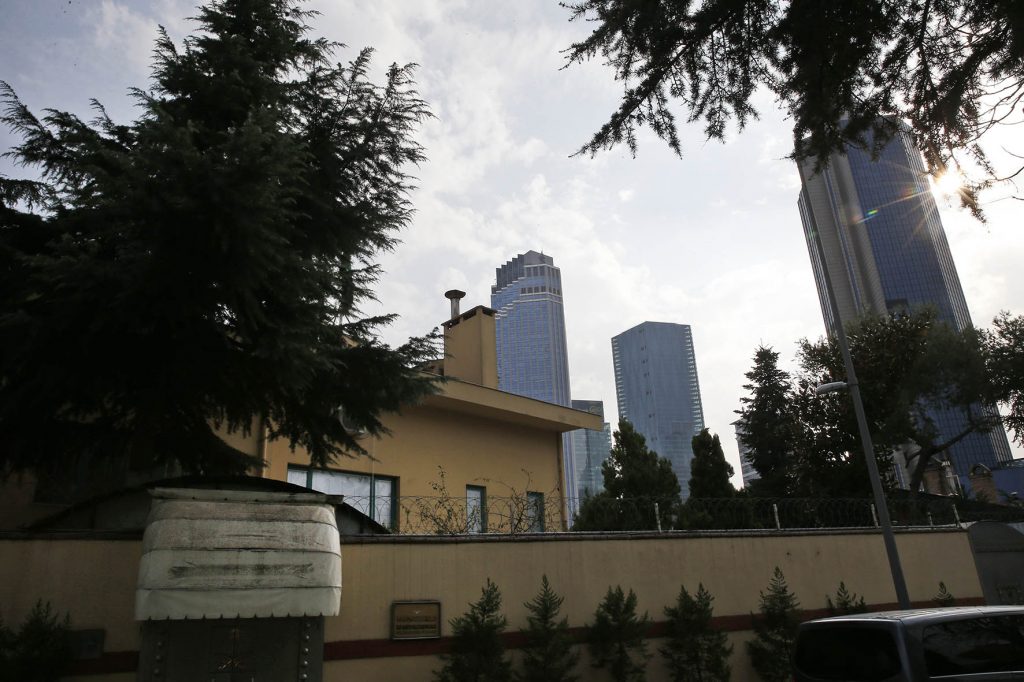 Saudi Crown Prince Mohammed bin Salman called the son of Jamal Khashoggi, the kingdom announced early Monday, to express condolences for the death of the journalist killed at the Saudi Consulate in Istanbul by officials that allegedly included a member of the royal’s entourage.

King Salman similarly made a condolence call as international pressure on the kingdom continues to rise, even after it acknowledged on Saturday that The Washington Post journalist was killed Oct. 2 at the consulate under still-disputed circumstances.

Turkish President Recep Tayyip Erdogan has said that details of Khashoggi’s killing “will be revealed in all its nakedness” in a speech in parliament on Tuesday, the same day a glitzy investment forum in Riyadh spearheaded by Prince Mohammed is to take place.

Saudi Arabia’s explanation that Khashoggi was killed in a “fistfight” and 18 Saudis have been detained has been met with international skepticism and allegations of a cover-up designed to absolve Prince Mohammed of direct responsibility. Turkish media reports and officials say a 15-member Saudi team flew to Istanbul, laid in wait for Khashoggi at the consulate and then cut off his fingers, killed and dismembered the 59-year-old writer.

“Why did these 15 people come here? Why were 18 people arrested? All of this needs to be explained in all its details,” Erdogan said.

The state-run Saudi Press Agency announced the calls to Khashoggi’s son, Salah, early Monday morning. Statements from the agency said both King Salman and Prince Mohammed express their condolences for his father’s death.

A Saudi friend of Khashoggi who was in frequent touch with him before his death told The Associated Press that Khashoggi’s son, Salah, has been under a travel ban and barred from leaving the kingdom since last year as a result of his father’s criticism of the government. The friend spoke on condition of anonymity for fear of repercussion. The Saudi statements did not acknowledge the ban.

The calls come after a leaked photograph apparently taken from surveillance footage shows Maher Abdulaziz Mutreb, a member of Prince Mohammed’s entourage on trips to the United States, France and Spain this year, at the consulate, just ahead of Khashoggi’s arrival. Mutreb’s name also matches that of a first secretary who once served as a diplomat at the Saudi Embassy in London, according to a 2007 list compiled by the British Foreign Office.

Saudi Arabia so far has not acknowledged or explained Mutreb’s presence in Istanbul — nor that of a forensics and autopsy expert, also on hand for Khashoggi’s arrival at the consulate.

Istanbul’s chief prosecutor summoned 28 more staff members of the Saudi Consulate, including Turkish citizens and foreign nationals, to give testimony on Monday, Turkish state broadcaster TRT reported. Prosecutors have previously questioned consulate staff; some Turkish employees reportedly said they were instructed not to go to work around the time that Khashoggi disappeared.

Also Sunday, images that were obtained by TRT World, a Turkish news channel that broadcasts in English, showed Khashoggi as he arrived at a police barrier before entering the consulate on Oct. 2. The images, taken from a security camera video, show the writer being searched before continuing toward the building.

Saudi Foreign Minister Adel al-Jubeir said on Fox News that Khashoggi’s killing was “a rogue operation” and that “we don’t know where the body is.'”

“The individuals who did this did this outside the scope of their authority,” he said. “There obviously was a tremendous mistake made and what compounded the mistake was the attempt to try to cover up. That is unacceptable to the government.”