To Keep Your Blood Pressure in Check, Brush and Floss 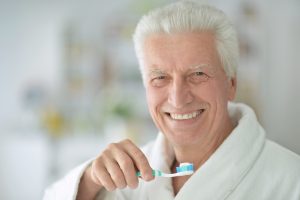 Struggling to bring your high blood pressure under control, even with the help of medications?

Open your mouth and say “Aha!” If you see tooth decay or gums that are sore, bleeding or receding, you may have found the culprit.

Researchers reported Monday that in adults whose hypertension was being treated with medications, systolic blood pressure — which measures pressure in the vessels when the heart beats — got higher as the health of their teeth and gums declined.

Compared to hypertensive patients who had no signs of periodontal disease, those with inflamed gums were 20 percent less likely to have gotten their blood pressure within healthy limits. In addition, patients whose dental health was poor had systolic blood pressure readings that were 3 mmHg higher, on average, than similar patients with healthy gums.

The findings were published in the Journal of Hypertension.

An estimated one in three U.S. adults — that’s 75 million Americans — are thought to have high blood pressure, putting them at greater risk of heart attacks and strokes. Hypertension is a primary or contributing cause of more than 1,000 deaths a day in the United States. Yet only 54 percent of those with the condition have brought their blood pressure readings under control with some combination of medication, diet and exercise.

The new study is in line with a mountain of research linking gum disease with higher rates of heart, blood vessel and kidney disease — all organs that are affected by high blood pressure. And it breaks new ground by detailing how poor dental health upends efforts to bring hypertension under control.

Indeed, the study found that people with untreated hypertension and healthy gums had blood pressure readings roughly equal to those of people who took medication for their hypertension but also suffered from gum disease.

The new research doesn’t establish that gum disease causes hypertension and its negative health effects. Many researchers suspect that, like stiff blood vessels, sore and bleeding gums are just one more manifestation of inflammation throughout the body.

Nor does the study show that treating periodontitis will reduce high blood pressure.

But it does suggest that, when dental health is poor, the challenge of bringing blood pressure under control will be more expensive and is more likely to fail.

Researchers from Italy scoured the records of 11,753 Americans who participated in the National Health and Nutrition Examination Survey between 2009 and 2014 and were screened for periodontal disease. Some 4,095 of the participants had been diagnosed with hypertension, of whom 88.5 percent were taking medication for the condition and 11.5 percent were not.

Rates of moderate and severe periodontal disease tended to be higher among study participants who were men, older, Latino, smokers, and those with less income and education. Participants aged 65 or older and had evidence of long-standing periodontal disease were much more likely than those with less severe and long-standing gum disease to have unchecked high blood pressure — a trend that was particularly evident among Latinos.

Both hypertension and periodontitis are more common among African Americans and Latinos in the United States. Those patient populations also have strikingly higher rates of the diseases linked to both, including heart disease, kidney failure and cerebrovascular diseases such as stroke and certain forms of dementia.

There’s some evidence to suggest African Americans may have a genetic vulnerability to high blood pressure, but it’s controversial. There’s little doubt that access to healthcare differs by race and ethnicity, and that impediments to good medical and dental care play a key role in racial and ethnic health disparities.

Dental care, especially, is expensive and far less likely than medical care to be fully covered by insurance. As a result, economic factors likely play a powerful role in influencing the health of a patient’s gums.

Moreover, many primary care physicians and cardiologists fail to ask their patients about their dental health, or to refer them to dentists unless they are undergoing cardiac procedures and have clear signs of tooth decay. And dentists don’t necessarily check their patients’ blood pressure.

The study authors wrote that patients with high blood pressure should have their gum health taken into account when they consider their treatment options.

“Our data suggest that all racial/ethnic subgroups, especially Hispanics, might benefit of such approach,” they wrote. “Conversely, ignoring the additional burden of poor periodontal status on blood pressure might translate into a higher cardiovascular risk in the long term.”

Charlene Niemi, director of health literacy for Care Harbor, a California-based nonprofit charity that provides free medical, dental and vision care in massive “pop-up” health clinics across the state, said it’s “imperative that individuals are informed that good oral care and treatment of gum disease does play a role in blood pressure.”

While everyone needs regular dental checkups, “those with hypertension should understand the importance of having a dental home, seeking routine follow-up, and practicing good oral care,” said Niemi. Linking underserved patients to such routine care is a key mission for Care Harbor.

At a time when federal health insurance for the poor and disabled is being scaled back and the requirements of the Affordable Care Act are being whittled away, it’s unlikely that patients with gum disease will get better access to dental care any time soon.

But if they did, it might help, says Dr. Gregg L. Fonarow, a cardiologist at UCLA.

“It’s suggested by this data, but would need to be proven,” Fonarow said.

In the meantime, he said, the existence of a link is clear: Patients with hypertension should make every effort to improve their oral health, and those with poor gum health should be vigilant for hypertension.