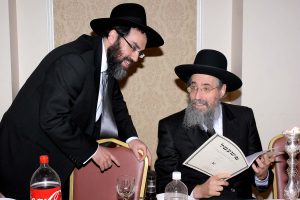 Still shocked by news of the petirah of a marbitz Torah who that very day had spent all three sedarim in the walls of his yeshivah, generations of talmidim gathered on Monday afternoon to mourn the passing of their beloved Rebbi.

At the levayah, held at Yeshivas Mekor Chaim in Lakewood, where it re-located from Boro Park several years ago, Harav Shmuel Kamenetsky, shlita, Rosh Yeshivas Philadelphia, at the opening of his hesped noted the scale of the loss.

“What can one say, to lose a gadol b’Yisrael, a talmid chacham and a rosh yeshiva in his younger years…it’s a tzaar not only for the family, but for all of Klal Yisrael to lose a Jew whose whole hanhaga [approach] was from a previous generation.”

Rav Yitzchok Paler dedicated nearly all his life to serving as a loyal link in the chain of the holy mesorah that he inherited, and seemed uniquely imbued with the abilities to do so. As a young talmid in Mekor Chaim, he was among those who possessed the brilliant analytical mind, ahavas haTorah, and tremendous hasmadah to master the demanding derech halimud of the Brisker Rav as it had been passed down to Rav Binyomin, one of the Rav’s most prized talmidim. At the same time, Rav Yitzchok possessed a singular capacity to explain the most lofty and complex topics not only with a remarkable clarity, but with an excitement and sweetness that allowed many a talmid to ascend to ever-greater heights in Torah.

“Rav Yitzchok was a gadol in his own right, but he felt a responsibility to give over his father’s Torah, and part of his gadlus was that he even suppressed his own koach hachiddush to do so,” a talmid of both Rav Binyomin and Rav Yitzchok told Hamodia.

Rav Yitzchok’s link was one in the ironclad chain of mesoras haTorah from both sides of his family. Rav Binyomin was a native of the city of Brisk and had been a close talmid of the Brisker Rav, Harav Yitzchok Zev Soloveitchik, zt”l, for several years before the outbreak of the Second World War. Rav Binyomin’s father, for whom Rav Yitzchok was named, was a talmid of Yeshivas Volozhin and was one of Brisk’s prominent marbitzei Torah, delivering daily shiurim. His mother, Rebbetzin Devorah, a”h, was a descendant of the Rema.

Rav Binyomin would escape Europe together with the Mir yeshivah and spend several years in Shanghai before emigrating to America and joining the chaburah that formed Yeshivas Beis Hatalmud. Shortly after his arrival in the United States, Rav Binyomin married, ybl”c, Rebbetzin Esther, the daughter of the Mattersdorfer Rav, Harav Shmuel Ehrnfeld, zt”l, adding the dynasty of the Chasam Sofer and Rav Akiva Eiger to the proud lineage Rav Yitzchok carried.

Born in 1952, Rav Yitzchok spent his formative years on Manhattan’s Lower East Side, where he was a student in Yeshivas Chasan Sofer, which the Mattersdorfer Rav had founded upon his arrival in America.

In 1965, Rav Binyomin moved to Boro Park and opened his own yeshivah. Upon the advice of Harav Moshe Feinstein, zt”l, it was named Mekor Chaim as a tribute to Harav Chaim Solovietchik, zt”l, whose derech halimud it was founded to perpetuate. Despite being a young bachur at the time, young Yitzchok not only joined the founding group of much older talmidim, but quickly became one of its most distinguished members. While still quite young, Rav Yitzchok gained a reputation for his great diligence in learning, amazing breadth and depth of knowledge, as well as a phenomenal mastery of his father’s shiurim on sugyuos haShas.

He would remain within the walls of the yeshivah for the rest of his life as a talmid, maggid shiur, and eventually as Rosh Yeshivah.

In the early 1970s, Rav Yitzchok married Yocheved Ginsberg, the daughter of Harav Gavriel Ginsberg zt”l, who for many years served as Rosh Yeshivah of Yeshivas Ner Yisrael in Toronto. The couple settled in Boro Park where they founded a home saturated with Torah and kedusha.

After several years in Mekor Chaim’s kollel, Rav Yitzchok began to deliver a shiur to younger talmidim. Harav Ahron Kotler zt”l once praised Rav Binyomin as the “amkan hador,” the generation’s foremost expert on probing the depths of Torah, who developed a method of toiling in a sugya until he was confident that he had arrived at conclusions that were pure truth.

Rav Yitzchok focused on training his talmidim to approach learning with this same demanding approach, built upon proofs drawn from the wide array of sefarim he had mastered. Yet, at the same time, he invested great efforts to see that each step should be carefully understood and took pains to present even the most complex of ideas in a way that could be understood and absorbed by younger bochurim. The shiur became a much needed primer, to train talmidim to Rav Binyomin’s approach before they entered his shiur.

“Rav [Binyomin] Paler was a gaon, but his words were very measured and you had to be trained in his way of thinking to really understand his shiur, Rav Yitzchok had a way of bringing the same mehalech down to the level of a young bochur and eventually prepared you to become a talmid of the Rosh Yeshivah [Rav Binyomin],”, another talmid of both Rav Binyomin and Rav Yitzchok told Hamodia.

In 2000, following Rav Binyomin’s petirah, Rav Yitzchok took the mantel of Rosh Yeshivah together with his two younger brothers, Harav Zecharia and Harav Simcha Bunim. With great mutual admiration and with the common purpose of producing new generations of true bnei Torah, the three have led the yeshivah together ever since.

In addition to his brilliance, Rav Yitzchok’s personal warmth and genuine sense of caring made him an especially cherished rebbi to the generations who were privileged to be his talmidim. He was always ready to help or advise in any number of life challenges they faced and even years after leaving Mekor Chaim, their Rosh Yeshivah reliably greeted them with the same broad smile.

Many prominent Roshei Yeshivah delivered hespedim at the levayah at Mekor Chaim. From there the aron was flown to Eretz Yisrael for kvurah on Har Hamenuchos.

“The Torah he [Rav Yitzchok] taught left an impression on all of us, because it was taught from the heart, from his very essence,” said Harav Shimon Alster, Rosh Yeshivas Cliffwood, in his hesped. “He gave over the meor and the clarity of Torah and made it sweet.”