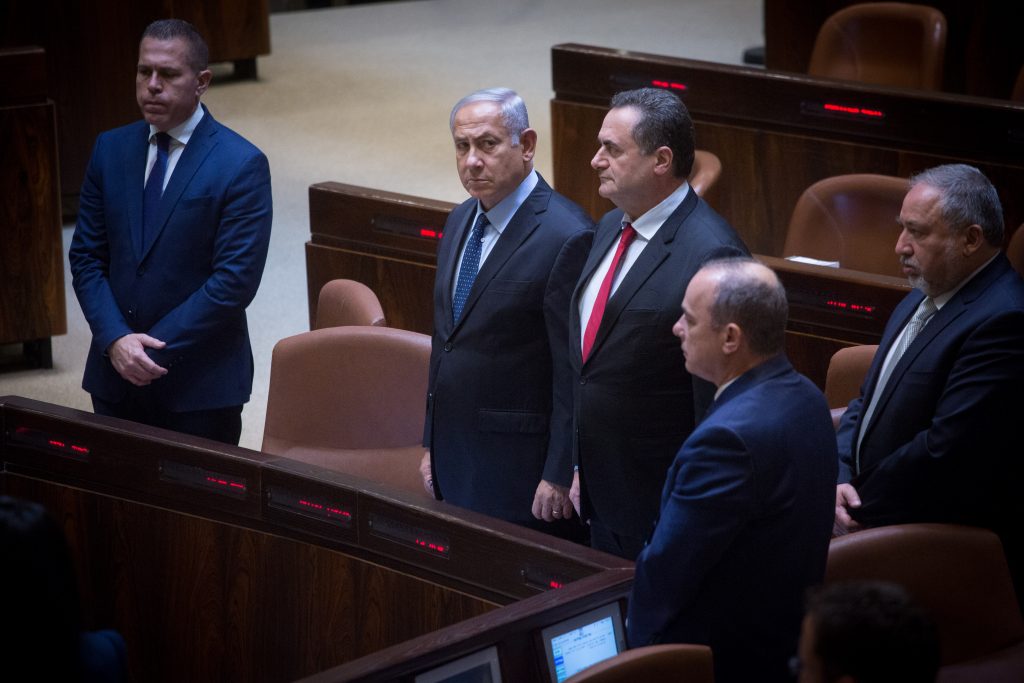 Prime Minister Binyamin Netanyahu came under attack by the Israeli left on Sunday as the nation marked the 23rd anniversary of the assassination of Prime Minister Yitzchak Rabin.

At a Knesset memorial ceremony, PM Netanyahu unequivocally denied that anyone in his office had called Rabin a “traitor,” as was alleged earlier in the day by Noa Rothman, Rabin’s granddaughter, at the official state ceremony held at Har Herzl.

“To my amazement, and I am still amazed, I heard today that a spokesperson at the Prime Minister’s Office published a post with a picture of Yitzhak Rabin’s handshake with Arafat in the White House with the caption ‘traitor,’” PM Netanyahu said, referring to Rothman’s claim.

“It never happened,” he stated.

Subsequently, his staff discovered that the offensive word had been posted by a journalist with no connection to the PMO.

Meanwhile, during the memorial ceremony at the President’s Residence, Rabin’s grandson Yonatan Ben Artzi urged President Reuven Rivlin to use his influence to advance legislation to limit the period of time that a prime minister of Israel can serve, The Jerusalem Post reported.

The call for term limits has been voiced numerous times in recent years by opposition politicians and activists chafing under the right-wing Netanyahu government. Netanyahu has held the highest office in the country from June 18, 1996 to July 6, 1999, and from March 31, 2009 to the present. He has been elected four times, matching the record of David Ben Gurion. PM Netanyahu is currently the second longest-serving prime minister after Ben-Gurion, and if his government lasts its full term, he will have broken that record too.

Ben Artzi stressed that democracy is at risk under the present administration.

“Democracy is not a monarchy,” he said. “Limiting the term of office of prime minister is necessary and important in order to prevent our leaders from becoming kings who are apart from the people,” he said to applause.

Reuven chose to sound the theme of unity:

“In the 23 years that have passed since the murder, we have been through difficult times. Wars and contentious political initiatives,” said the president. “Each time, and despite the polarization of views, we have avoided terrible moments like this. Have we healed? I am not sure. I do not know.

By contrast, Labor Party secretary general Eran Hermoni sent a letter to Netanyahu on Sunday, rehashing the accusation that he bore guilt for the Rabin assassination.

“As someone who remembers well the terrible months that preceded the murder, the violent atmosphere that raged in the streets under the watchful eyes of right-wing leaders and with the encouragement of Netanyahu, who was then opposition chairman, I think that after 23 years, your time has come, Bibi, to accept responsibility,” wrote Hermoni.

Hermoni added, “I expect the Prime Minister to take advantage of this special opportunity to finally repent of his sin. He must apologize for the wild and organized incitement that led to the period before the terrible political assassination.”

The annual Rabin memorial has frequently included direct and indirect attacks on Netanyahu, who was blamed for turning a blind eye to the villification of the Rabin as a “traitor” and Nazi at right-wing rallies he led. Netanyahu has denied accusations of incitement, saying that said, in one major event in particular, he did not see the anti-Rabin posters.

Later in the day, Netanyahu accused Opposition leader Tzipi Livni and MK Shelly Yachimovich of hypocrisy in blaming the right wing for incitement while ignoring it on the left.

In a statement released by the Prime Minister’s Office, he lashed out at his accusers:

“Today I heard the self-righteous and pretentious remarks by Tzipi Livni and Shelly Yachimovich. They said that there is no incitement from the Left. There are no calls for murder, and no hints to murder.

“I should like to remind them about the artistic presentation at Bezalel with a noose around my neck, the guillotine in the square at the left-wing demonstrations against me, and the response to the post by Rabin’s granddaughter who spoke today, who wrote, I quote: ‘Perhaps with the murder of Netanyahu there will be a day off.’

“Incitement from every quarter must be condemned, and without hypocrisy.”