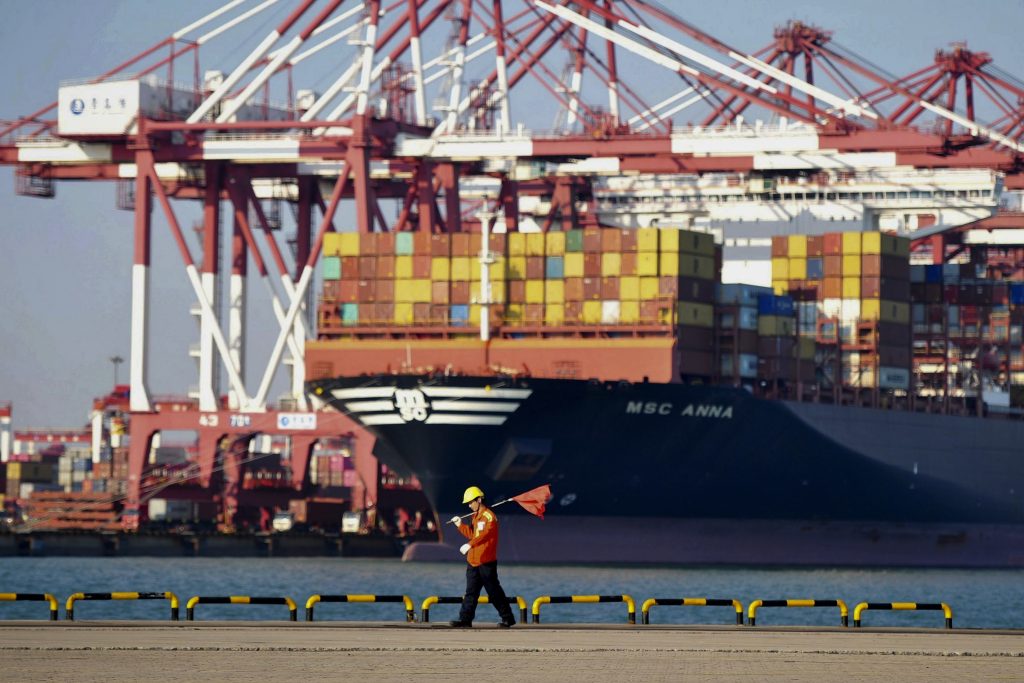 China’s economic growth sank to its lowest level since the global financial crisis in the latest quarter, adding to challenges for Communist leaders as they fight a tariff battle with Washington.

The world’s second-largest economy expanded by 6.5 percent over a year earlier in the three months ending in September, government data showed Friday. That was down from 6.7 percent the previous quarter and the slowest rate since early 2009.

China’s economy already was cooling due to a clampdown on credit to rein in a debt boom before U.S. President Donald Trump’s tariff hikes on Chinese imports in a fight over Beijing’s technology policy. The impact of American import controls has been limited, but the downturn in other parts of the economy prompted Chinese leaders to ease controls and order banks to lend.

“China’s slowdown is a little sharper than expected, but basically fits our narrative for the economy,” said Bill Adams of PNC Financial Services Group in a report.

Beijing’s lending controls and “trade uncertainties” are “taking a bite out of economic momentum,” Adams said.

Communist leaders express confidence their $12 trillion-a-year economy can survive the conflict with U.S. President Donald Trump. But export industries have begun to suffer from American tariff hikes of up to 25 percent on Chinese goods.

Economic performance was “stable overall,” but “we must also see [that] the number of external challenges has increased significantly,” said a government spokesman, Mao Shengyong.

“Downward pressure has increased,” Mao said at a news conference.

The government announced that insurers will be allowed to create products to help stabilize the market by reducing “liquidity risk.” That refers to fears the price decline might trigger sales by lenders that accepted stock as collateral for loans, flooding the market and setting off a new collapse.

Retail spending, factory output and investment in factories and other fixed assets weakened.

Beijing has rejected U.S. pressure to scale back industrial development plans Washington says are based on stealing or pressuring foreign companies to hand over technology. American officials worry they might threaten U.S. industrial leadership.

The conflict with Washington has prompted communist leaders to step up the pace of a marathon effort to encourage self-sustaining growth driven by domestic consumption and reduce reliance on exports and investment.

Beijing has cut tariffs, promised to lift curbs on foreign ownership in the Chinese auto industry and taken other steps to rev up growth. But leaders reject pressure to scrap plans such as “Made in China 2025,” which calls for state-led creation of Chinese champions in robotics and other technologies, which Beijing sees as the path to prosperity and global influence.

Beijing has responded to previous downturns by flooding the state-dominated economy with credit, but that has swelled debt. The ruling Communist Party has told banks to step up lending, especially to private entrepreneurs who generate China’s new jobs and wealth, but has avoided a full-scale stimulus. Forecasters say it will take the measures some time to work their way through the economy.

There are signs government support is “starting to gain traction,” but “more easing will still be needed in order to stabilize growth,” said Julian Evans-Pritchard of Capital Economics in a report.

“We doubt the latest pick-up in infrastructure spending will be enough to prevent the economy from cooling further in the coming quarters,” said Evans-Pritchard.

Washington has raised tariffs on $250 billion of Chinese goods and Trump says he might extend penalties to almost all imports from China. Beijing responded with its own tariff hikes on $110 billion of American imports but is running out of goods for retaliation due to their lopsided trade balance.

Forecasters say if threatened tariff hikes by both sides are fully carried out, that could cut China’s 2019 growth by up to 0.3 percentage points.

September exports to the United States rose 13 percent despite the tariff hikes, down slightly from August’s 13.4 percent. The country’s politically volatile trade surplus with the United States widened to a record $34.1 billion.

Chinese exporters of lower-value goods such as clothes say American orders fell off starting in April as trade tensions worsened. But makers of factory equipment, medical technology and other high-value goods express confidence they can keep their market share.

Trade accounts for a smaller share of the economy than it did a decade ago but still supports millions of jobs.

On Thursday, the Commerce Ministry promised official help for companies that have suffered due to the American import controls.

“In general, the impact is limited,” said a ministry spokesman, Gao Feng. “Governments at all levels will also take active measures to help enterprises and employees cope with possible difficulties.”