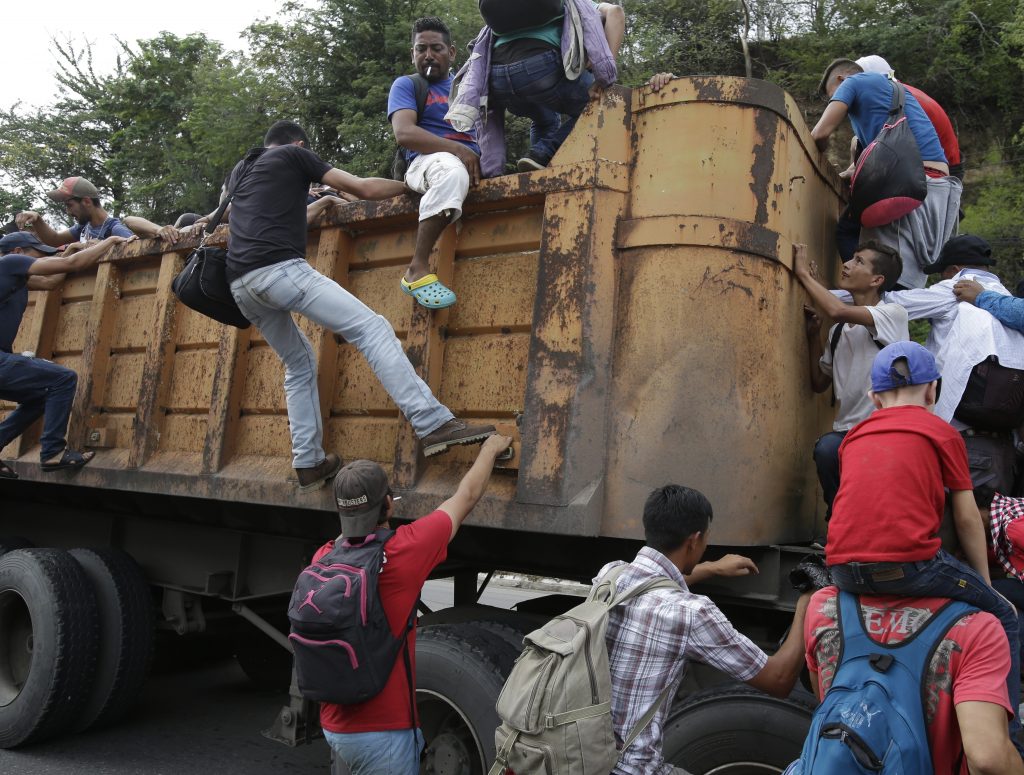 As some 3,000 Hondurans made their way through Guatemala, attention — and pressure — turned to Mexico, after President Donald Trump threatened Thursday to close the U.S.-Mexico border if authorities there fail to stop them — a nearly unthinkable move that would disrupt hundreds of thousands of legal freight, vehicle and pedestrian crossings each day.

With less than three weeks before the Nov. 6 midterm elections, Trump seized on the migrant caravan to make border security a political issue and energize his Republican base.

“I must, in the strongest of terms, ask Mexico to stop this onslaught — and if unable to do so I will call up the U.S. Military and CLOSE OUR SOUTHERN BORDER!” Trump tweeted on Thursday, adding that he blamed Democrats for what he called “weak laws!”

The threat followed another one earlier this week to cut off aid to Central American countries if the migrants weren’t stopped. However, earlier this year Trump made a similar vow over another large migrant caravan, but didn’t follow through and it largely petered out in Mexico.

On Thursday, Mexico dispatched additional police to its southern border, after the Casa del Migrante shelter on the Guatemalan side of the border reported that hundreds of Hondurans had already arrived there.

Mexican officials say the Hondurans won’t be allowed to enter as a group, and would either have to show a passport and visa — something few have — or apply individually for refugee status, a process that can mean waiting for up to 90 days for approval.

Mexico’s ambassador to Guatemala, Luis Manuel Lopez Moreno, met with leaders of the caravan Wednesday and warned them that Hondurans caught without papers in Mexico would be deported.

Still, the idea that Mexico could close its porous southern border — or that the United States would choke off the lucrative trade and other traffic between the two nations — strained the imagination.

And, much like Guatemala and Honduras, Mexico is itself a country of many migrants, raising the question of whether the political will exists for a confrontation.

Mexican President-elect Andres Manuel Lopez Obrador, who takes office on Dec. 1, wants to avoid repression against migrants and also avoid angering the United States. He has long pushed economic development as a way to keep people from migrating, and on Wednesday he reached out again.

“We will offer jobs, work to Central Americans. Anyone who wants to work in our country will have help, will have a work visa,” he pledged.

As the mass of humanity strung out from Guatemala City to the border, it was unclear whether those who made it the farthest would wait for their countrymen to arrive before attempting a mass crossing into Mexico. By Thursday, the caravan had dispersed a bit, with the youngest and strongest of the migrants walking ahead together, some boarding buses or trying to hitch rides.

Mauro Verzzeletti, a priest who runs the Casa del Migrante shelter in the Guatemalan capital, said about 3,000 people slept there overnight and left around 4 a.m. to continue the journey, adding that “more are arriving.”

On Thursday, Trump said he prioritizes border security over even the recently struck trade deal to replace NAFTA, the United States-Mexico-Canada Agreement, or USMCA.

“The assault on our country at our Southern Border, including the Criminal elements and DRUGS pouring in, is far more important to me, as President, than Trade or the USMCA. Hopefully Mexico will stop this onslaught at their Northern Border,” Trump tweeted.

Marcelo Ebrard, Lopez Obrador’s pick to become foreign relations secretary after he takes office, said Trump’s tweets needed to be understood in the context of the upcoming U.S. midterm elections.

“The electoral process is very near, so he is making a political calculation,” Ebrard said in an interview with Radio Centro.

Trump’s stance, he said, was “what he has always presented,” adding he saw “nothing surprising in it.”

Juan Escobar, 24, who was among the Honduran migrants in the caravan, said such rhetoric would not dissuade them from continuing the journey.

“Only G-d on high can stop us,” Escobar said.

Carlos Lopez, 27, said he was hopeful of securing a 40-day work visa in Mexico. He added that he was concerned by the president’s threats, but “you have to keep fighting.”