Caffeine Consumption by Teens Could Lead to Problems, Now and Later 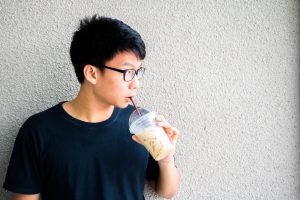 This article is for all of the teenagers out there. Society regularly expects you to be adult, even though developmentally you are years from being fully grown. Yes, you are mature in many ways: You can break down the paradoxes in Beowulf, many of you drive and do so quite safely, you handle schedules that would overwhelm many adults. Yet your bodies are still growing, and your brains are still fine-tuning their neural connections. Because of this, you probably cannot process caffeine as seamlessly as your parents can.

This must be news to all of you, because adolescents are among the fastest-growing consumers of caffeine. I understand an iced vanilla latte tastes like dessert, a caffeinated drink is as accessible as a bottle of water, and it feels grown-up to be toting a Starbucks cup. But all of this caffeine may be amplifying your anxiety, compromising tonight’s sleep, tanking tomorrow’s school performance, inhibiting nutrient absorption, dehydrating your cells, and when mixed with alcohol, causing real trouble.

Let’s look at the evidence.

The Power of Caffeine

Caffeine is widely considered a drug, a chemical that changes brain function and affects mood, cognition or behavior. It may be a drug that is socially acceptable, universally used, even cool, but it still causes withdrawal symptoms such as headaches, fatigue and a lack of attention when removed from the diet.

How much is healthy?

Caffeine is not a nutrient; you do not need it to be healthy. In fact, it can leave you lacking nutrients because it has been shown to inhibit calcium. Caffeine is also a diuretic, so it causes the body to release water – and the more caffeinated drinks you consume, the less likely you are to drink water.

The American Academy of Pediatrics says that adolescents should consume no more than 100 mg of caffeine a day (less than the amount found in a Starbucks grande latte). It also takes the position that “stimulant-containing energy drinks have no place in the diets of children or adolescents.” The Institute of Medicine does not support selling caffeinated products to school-age children.

According to the Centers for Disease Control and Prevention, almost 60 percent of middle schoolers and more than 70 percent of high schoolers do not get enough sleep on school nights. Some of their sleep problems can be attributed to caffeine, which can remain in the body for seven hours after consumption and blocks the neurochemical that triggers sleepiness from doing its job. Teens who lack sleep perform worse the next day.

Sleep is important for teens in other ways. Adequate sleep contributes to proper growth and brain development. During childhood and adolescence, the brain goes through a period called synaptic pruning when unnecessary connections are consolidated; this consolidation mostly happens during sleep. Also, most of an adolescent’s growth hormone is secreted during sleep.

Caffeine has also been shown to increase heart rate, cortisol, blood pressure and anxiety, and to decrease impulse control. After an initial morning rush of caffeine, you may find yourself lagging through class because your body is craving more.

Taste preferences and eating habits are often cemented in childhood and adolescence, so teens, when you consume sweet, caffeinated drinks such as sodas and lattes every time you feel sluggish, you are creating a pattern that may be hard to break as an adult.

In a recent study, almost one-quarter of college students mixed energy drinks with alcohol. When alcohol, which is a depressant, is combined with caffeine, which is a stimulant, the body stays alert longer than if drinking just alcohol. This prompts people to consume more alcohol because they do not feel the depressant, sleepy effect of alcohol, leading to higher blood alcohol levels. A report in the Journal of Caffeine Research entitled “Alcohol and Caffeine: The Perfect Storm” states, “Drinkers who reported mixing alcohol with energy drinks had a threefold risk of being legally intoxicated.” These people also tend to underestimate their intoxication, which can lead to a higher occurrence of risky behaviors. Emergency room visits involving energy drinks have increased in recent years.

It is difficult to determine how much caffeine is in some products as caffeine does not have to be listed on the Nutrition Facts panel on food labels because it is not a nutrient. It may be listed as an ingredient, but the amount is not required. Caffeine is now added to foods such as gum, mints, candy and water, along with makeup and beauty products that promise to reduce swelling and cellulite.

There are alternative ways to boost energy that may not taste as sweet as that Frappuccino but are measurably healthier. Eat a diet of whole foods that is high in complex carbohydrates, healthy fats and B vitamins. Get regular exercise, drink lots of water and get at least nine hours of sleep every night. If you do all of these things, you might actually master adulting better than many adults.

Seidenberg is co-founder of Nourish Schools, a D.C.-based nutrition education company, and co-author of “Super Food Cards,” a collection of healthful recipes and advice.