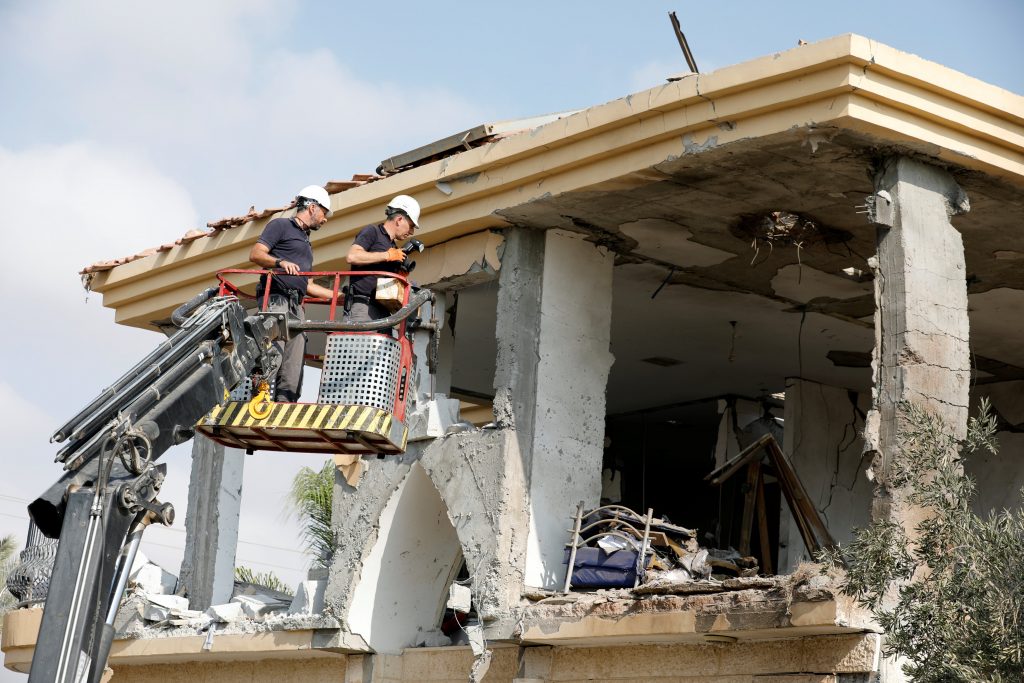 In a joint statement Wednesday, Hamas and Islamic Jihad said that they were not responsible for the firing of a rocket at Israel early Wednesday morning, saying that it was carried out by groups seeking to derail Egyptian efforts to bring calm to the area. “We reject irresponsible efforts to harm the Egyptian efforts, and that includes the firing of this rocket,” the statement said. With that, the groups said, they were “ready to repel Israeli attacks, and when we do we will not hide it but will instead make it very clear to all that we are doing so.”

IDF Spokesperson Ronen Manalis rejected that claim. Announcing that Israel had hit 20 terror targets after the early morning attacks, Manalis said that even if a Hamas operative did not press the button launching the rocket, the group “created an atmosphere of terror. The responsibility for what goes on in Gaza is completely on the terror group. Only two groups in Gaza have rockets capable of reaching that far into Israel, and they are Hamas and Islamic Jihad,” he added.

Analysts on Channel 20 lent credence to the IDF’s version. According to the analysts, Hamas is seeking to “impress” Egyptian intelligence chief Abbas Kamal, who has been charged with brokering a deal to calm tensions in the area. He is trying to show that without pressure on Palestinian Authority chief Mahmoud Abbas to soften his position on Gaza, terrible violence and an all-out war will erupt. Kamal is set to meet on Wednesday or Thursday with Abbas, who has announced that he plans to cut off all aid to Gaza unless Hamas turns over civilian control of Gaza to the PA, and disbands its military wing.

Hamas has rejected these demands, and analysts say that Israel is caught in the middle – that Hamas is using the ongoing rioting at the Gaza border, as well as the latest escalation of tensions Wednesday morning – to pressure Kamal to in turn pressure Abbas to give up on his demands. Otherwise, a full-fledged war could erupt with Israel, and that would have negative implications for Egypt.

Defense sources told Hadashot News that this week was a crucial one for Kamal’s efforts. “On Monday and Tuesday, Defense Minister Avigdor Liberman practically declared war on Hamas, saying that Israel had to hit them hard, and that there was no chance of a ceasefire,” the sources were quoted as saying. “Netanyahu and the IDF brass want to hold off and give Egypt another chance. We’ll know by Friday it Kamal has succeeded – if the riots are more controlled, and there are fewer balloon terror attacks. If things don’t change or even deteriorate, Liberman may get his way, and a major Israeli offensive could begin as soon as next week,” they added.

Sirens sounded in the Be’er Sheva area early Wednesday, as Gaza terrorists fired two rockets at Israel. One hit the backyard of a house in Be’er Sheva and the other fell into the sea off the Israeli coast. Several people in Be’er Sheva were treated for injuries sustained as they fell while rushing to get into a bomb shelter, while several children were treated for shock. Three of the children were in the home that was damaged when the rocket the backyard, causing heavy damage to the house.