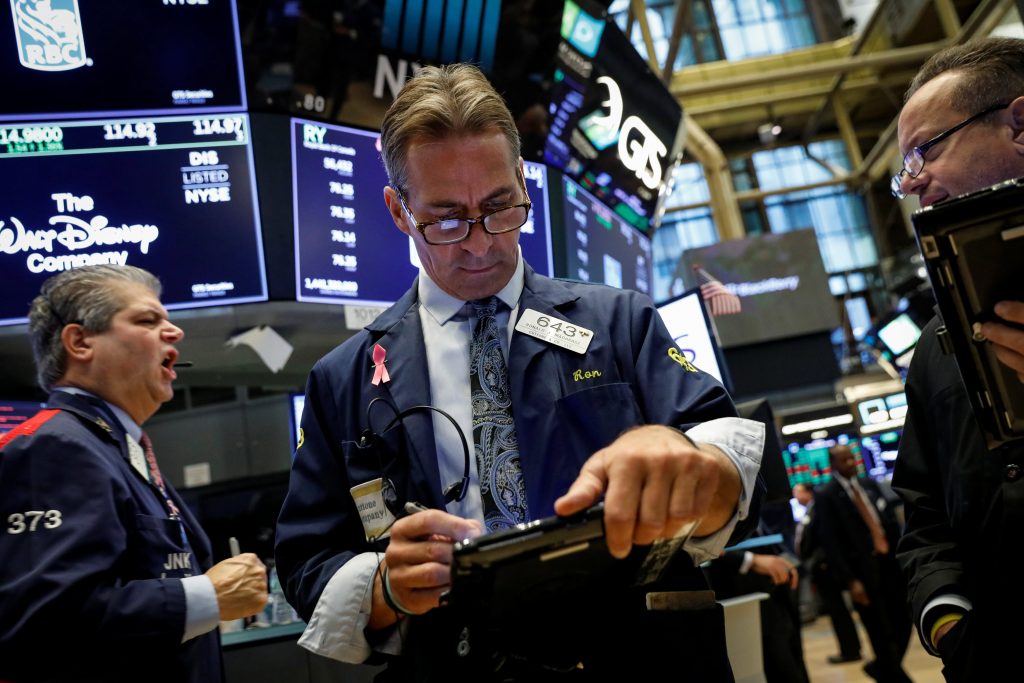 World stock markets are turning higher again Tuesday, helped by strong earnings reports from major U.S. companies in finance and health care. Technology companies are also rising after their recent slump, and the S&P 500 index is on track for its biggest gain since early April.

The Federal Reserve said output by U.S. factories, mines and utilities climbed in September despite the effects of Hurricane Florence, and the Labor Department said U.S. employers posted the most jobs in two decades in August while hiring continued to increase.

The Nasdaq composite climbed 164 points, or 2.2 percent, to 7,595 as technology companies reversed some of their losses from the last few days. The Russell 2000 index of smaller-company stocks rose 30 points, or 2 percent, to 1,583.

Earnings for U.S. companies climbed about 20 percent in each of the first two quarters of 2018 as economic growth picked up and corporate taxes were slashed. Analysts expect similar results in the current period.

Stocks have gyrated over the last few days following a six-day losing streak that included some of their biggest declines of the year. The S&P 500 fell 6.9 percent from its record high on Sept. 20 to its recent low on Thursday. It suffered a dizzying 10 percent drop in just nine days in late January and early February, and lost 7.3 percent during a downturn in March.

Health care products giant Johnson & Johnson rallied 2.1 percent to $136.73 after it said prescription sales jumped. Its results, too, were stronger than analysts expected.

…AND WEALTHY: Morgan Stanley rose 5.8 percent to $46 and Goldman Sachs added 2.3 percent to $220.10 after the two investment banks did better than expected in the third quarter, helped by strong performance in their trading operations and better-than-expected revenue from stock underwriting. Morgan Stanley’s stock has fallen 12 percent this year and Goldman has lost almost 14 percent.

TECH UPDATE: Technology companies rose. Microsoft jumped 2.7 percent to $110.52 and Adobe rallied 8.2 percent to $257.59 after it backed its fourth-quarter profit and revenue forecasts. The stock has jumped 46.5 percent this year, but had slumped in recent days. Internet companies also advanced. Alphabet, Google’s parent company, rose 2.3 percent to $1,127.80 and Facebook added 2.6 percent to $157.44.

SUSPENSE FOR NETFLIX: Netflix rose 1.9 percent to $339.33 ahead of its third-quarter report Tuesday afternoon. The streaming video company has struggled over the past three months and has fallen about 20 percent since its second-quarter report, when it posted disappointing subscriber totals and gave a weaker forecast than analysts expected.

On Tuesday Benchmark Capital analyst Mike Hickey started coverage of Tilray with a $200 price target, saying its supply deals with pharmacies and a partnership with drug maker Novartis will help make it an early leader in the market. Hickey valued the Canadian cannabis market at about $3.2 billion in 2019 and said it will climb to $8.1 billion by 2023.

Tilray’s market value stands at $14.5 billion, up ninefold since it went public in mid-July, and Canopy Growth has more than doubled in value to $12 billion. Canopy announced a $4 billion investment from Corona beer maker Constellation Brands in August.