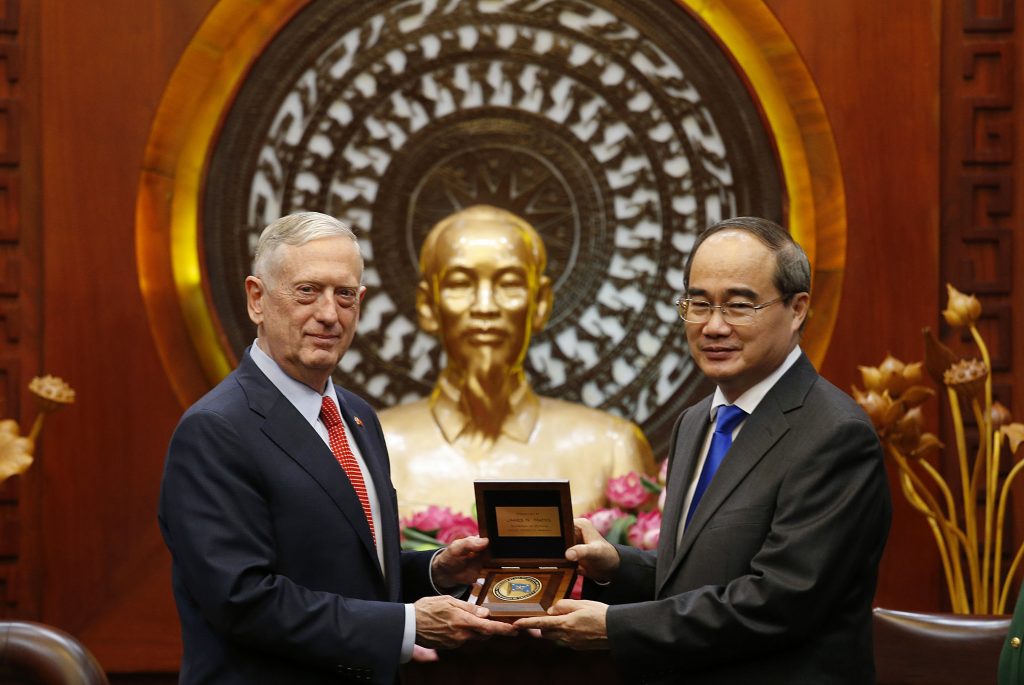 “He said, ‘I’m with you 100 percent,’” Mattis said Trump told him in a phone call Monday from a U.S. Air Force plane carrying the Pentagon chief to Asia.

Mattis’ future was thrown into question by Trump’s interview with CBS’ “60 Minutes” that aired Sunday in which the president speculated Mattis might depart and might be a Democrat.

Mattis said he has not talked with Trump about stepping down, adding that he had never in his life registered as a member of any political party.

“I’m on his team. We have never talked about me leaving,” Mattis said. “We just continue doing our job.”

Trump called him in flight to discuss the Pentagon’s response to the hurricane that hit Florida and other states last week, Mattis told reporters traveling with him.

Mattis said he did not watch the “60 Minutes” interview and hadn’t spoken to Trump until their phone conversation Monday.

Mattis has been dogged by questions in recent months about how long he will stay at the Pentagon amid indications that his relationship with Trump is not as warm as it was during the first year of the administration when Trump seemed to revel in the 68-year-old former Marine’s reputation as a battle-hardened warrior.

“I have some people that I’m not thrilled with,” Trump said in the interview.

After interviewer Leslie Stahl suggested Mattis might be leaving, Trump did not rule it out.

“It could be that he is,” he said. “I think he’s sort of a Democrat, if you want to know the truth. But Gen. Mattis is a good guy. We get along very well. He may leave. I mean, at some point, everybody leaves. Everybody. People leave. That’s Washington.”

Trump has overruled Mattis on several policy issues, including on the administration’s plan to create a new military branch called the “space force.” Mattis opposed the idea last year but has since endorsed it.

The tensions have grown since John Bolton joined the White House as national security advisor this year and began staking out hard-line positions on China, Iran and Syria, officials said.

Trump said during the interview that he knew more about NATO than Mattis, who held a senior command in the North Atlantic Treaty Organization before retiring as a four-star general in 2013.

Mattis is in Ho Chi Minh City for talks with defense officials from Vietnam. He heads to Singapore on Wednesday for a meeting of defense ministers from Southeast Asia.