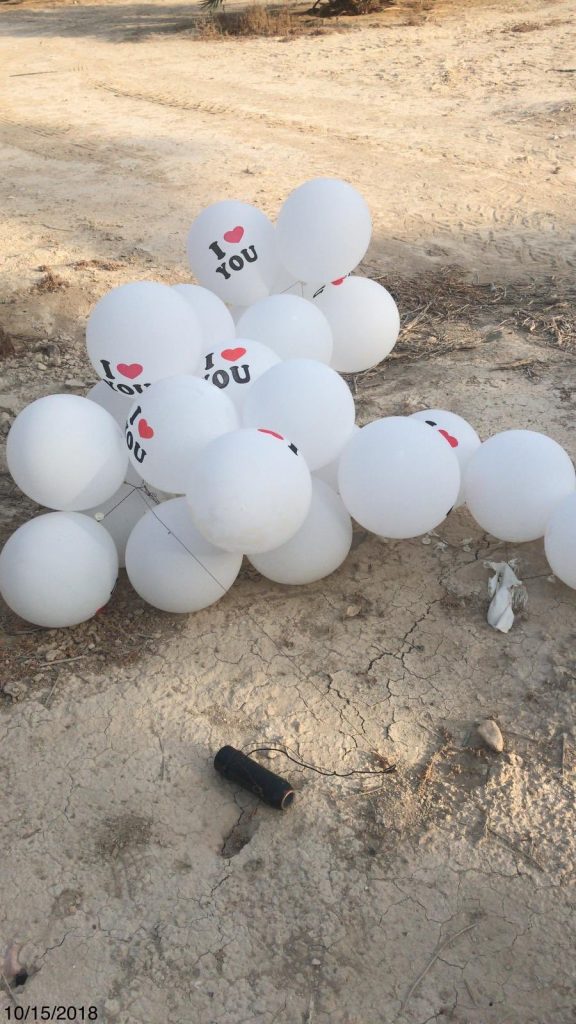 Israeli forces on Tuesday morning hit a group of Gaza Arab terrorists who were about to send off terror balloons at Israeli farms and forests in the south of the country. This was the third time in three days that Israel targeted terror balloon gangs. Israeli planes hit the area where the gangs were operating, causing them to run away. Gaza sources said that there were no injuries in the incident.

Despite that attack, several terror balloons were found in areas near the Gaza border fence Tuesday morning. Bomb squad workers defused the explosives that were attached to the balloons before they could explode.

On Monday night, Israeli planes hit a Hamas outpost near the Gaza border fence after two terrorists approached the fence, with the apparent intent of breaching it. The terrorists planted a bomb at the fence, which exploded, damaging the fence. The incident came in the wake of major riots, with thousands of Gaza Arabs massing along the fence, throwing rocks and firebombs at Israeli forces, who responded with anti-riot measures. Gaza sources said that 19 people were injured in the rioting.

On Monday, Defense Minister Avigdor Liberman said that he saw “no chance” for a ceasefire agreement with Hamas. “In my opinion as Defense Minister, we must impose the hardest blow we are able to against Hamas, even if it means all-out war,” Liberman said. “We have to hit them and make them hurt.” With that, Yediot Acharonot reported, the Security Cabinet decided to hold off on any increased action against Gaza for the next several days, to give UN and Egyptian negotiators a chance to revive the ceasefire talks between Israel and Hamas.

Several months ago, third-party sponsored talks were going on between Israel and Hamas about the possibility of a long-term ceasefire. Under the deal, Israel would relax its sanctions on Hamas and allow more goods into Gaza, as well as more freedom of movement for Gaza residents. In return, Hamas would halt its Gaza border riots, end its campaign of balloon and kite terror attacks, and enter into serious talks that would result in the return home of Israelis held by the terror group.

Those indirect talks were sponsored by Egypt and U.N. officials, and had been conducted in earnest until before Rosh Hashanah. They were halted for a week for a Muslim festival but have not restarted, mostly due to opposition to the impending deal by Mahmoud Abbas and the Palestinian Authority. Since the talks, Hamas has increased its aggression against Israel.