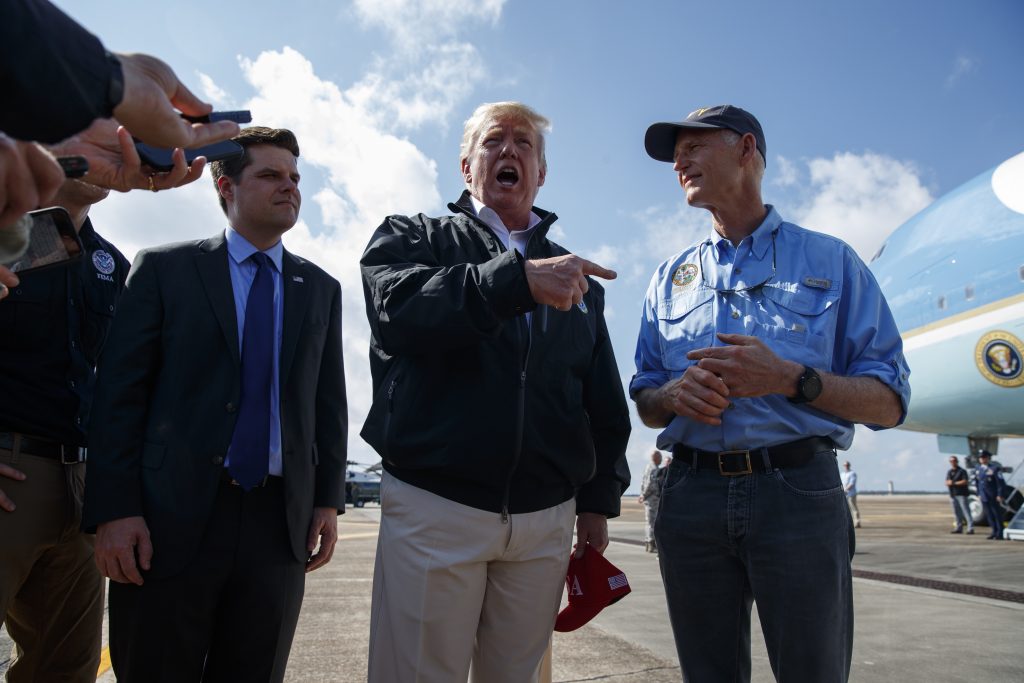 President Donald Trump said Monday he would ask Congress for emergency disaster aid in the aftermath of Hurricane Michael, as he and first lady Melania Trump toured the devastation from the deadly storm that has left hundreds of thousands without power in Florida and Georgia.

FEMA administrator Brock Long, who was traveling with Trump, did not give a specific dollar amount for the needed aid, saying it was premature. Trump made the remarks at an American Red Cross facility in Macon, Georgia, after visiting hurricane-ravaged areas on the Florida Panhandle earlier in the day.

“We just left Florida and the people there are thrilled with our people and our talent,” Trump said in Macon. “What they were not thrilled with was this hurricane.”

Trump and the first lady arrived earlier Monday at Eglin Air Force Base in Okaloosa County, Fla., and were en route to Warner Robins, Ga., later in the afternoon. They were greeted by Gov. Rick Scott, R, FEMA Administrator William “Brock” Long, Rep. Matt Gaetz, R-Fla., and other officials.

“Rick Scott, your governor, has done an incredible job, and all of your people have been amazing – working with FEMA, working with the first responders, and always law enforcement,” Trump said before boarding a helicopter to survey the storm-damaged areas. He noted that the storm was so strong that some residents’ homes had been entirely washed away.

“Some of them have no trace of a home. You wouldn’t even know it,” Trump said, adding that the government’s priority was to provide food, power and safety to those affected.

Scott thanked Trump, who he said had “come through and done exactly what he said he was going to do.”

The Trumps then flew over devastated parts of Mexico Beach and Panama City, Florida. Mexico Beach is a tiny town that was nearly swept away by the storm; the president’s helicopter route Monday took him over the debris-filled scene, which included thousands of uprooted trees, a toppled water tower and homes torn loose from their foundations.

“It’s very good he’s coming down here, but I’m most thankful he waited a few days until search and rescue could do their thing,” said David Childs of Griffin, Georgia, as he boarded up his beachfront vacation home. “If you see him, tell him the boys in 1B want to shake his hand.”

Jim Ostman, a 27-year resident of the town who rode out the hurricane in his condo, said that Trump was “absolutely doing enough for us.”