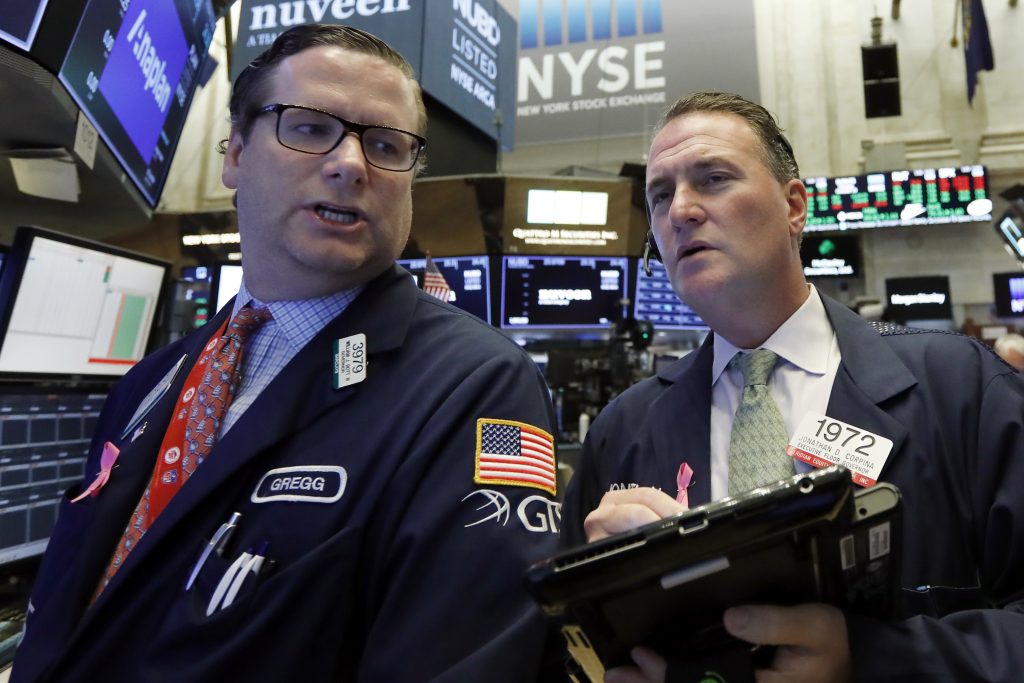 U.S. stock indexes are mostly lower Monday as technology companies continue to slump. Trading on Wall Street remains uneven after last week’s steep losses. The S&P 500 and other major U.S. indexes are coming off their worst week since late March as investors worry about rising interest rates and trade tensions between the U.S. and China. Bank of America dropped after it reported disappointing growth in loans.

Stocks continued to waver. The Dow fell as much as 86 points Monday morning, then turned higher and gained 99 points only to fall again. Stocks traded in even wider ranges last week. The S&P 500 rallied Friday but lost 4.1 percent for the week, its biggest decline in more than six months. It’s fallen for three weeks in a row.

TECH FALLS AGAIN: The technology companies that have led the market higher in recent years, including some of the world’s most valuable companies, continued to decline. Apple fell 1.8 percent to $218.06 and software maker Adobe decreased 3.5 percent to $240.16. Chipmaker Nvidia skidded 3.2 percent to $238.67.

The S&P 500 index of technology companies has dropped 7.8 percent since setting a record high on Oct. 3, less than two weeks ago. The Nasdaq, which has a high concentration of tech stocks, is down 8.1 percent since late August.

Netflix, which will report its results Tuesday, fell 1.8 percent to $333.36. It’s plunged 23 percent since it reported weak user growth three months ago.

RETAIL WOBBLE: U.S. consumer spending edged up 0.1 percent in September, according to the Commerce Department. A rebound in car sales was canceled out by weak results elsewhere. Economists had projected a solid 0.6 percent rise in sales. Sales also grew just 0.1 percent in August, and the current stretch is the weakest two-month performance since the start of the year.

D-FENSE: Defense contractors L3 Technologies and Harris Corp. were the biggest gainers on the S&P 500 after they said they will combine in an all-stock deal. The combined L3 Harris Technologies will have annual sales of around $16 billion this year, which would make it the sixth-largest U.S. defense contractor and one of the top 10 globally.

ENERGY: U.S. crude rose 0.1 percent to $71.39 a barrel in New York. Brent crude, the standard for international oil prices, fell 0.2 percent to $80.23. Natural gas prices continued to surge as the weather in the U.S. grew colder. They rose 2.4 percent to $3.24 per 1,000 cubic feet and have climbed almost 8 percent in October to reach their highest price since January.

Rising bond yields often lead to losses for high-dividend companies because many investors think of them as alternatives to bonds. That pattern hasn’t held up in the last few days as investors have been looking for relatively safe picks on the stock market. On Monday, power company Southern Co. gained 1.8 percent to $44.37 and wireless infrastructure company American Tower rose 0.7 percent to $143.04.

Global stock indexes have been struggling this year as investors move money to the U.S. and out of Europe and Asia in response to faster economic growth in the U.S. and rising trade tensions. The losses the last few weeks for global markets have made it even worse.

The Hang Seng index in Hong Kong has fallen 22 percent since early January, meeting Wall Street’s definition of a “bear market,” or a decline of 20 percent from a recent peak. A number of other indexes have fallen at least 10 percent, known as a “correction.” Those include the DAX and Kospi, which both peaked in late January, as well as the FTSE 100, the Ibex in Spain and the FTSE MIB in Italy, which peaked in May.