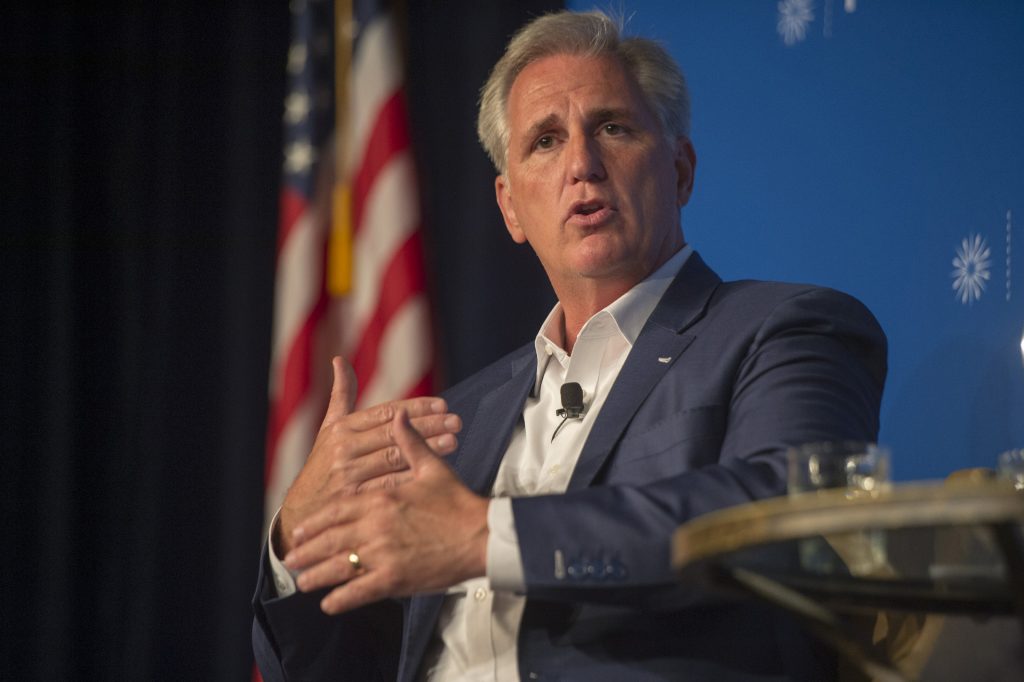 House Majority Leader Kevin McCarthy has introduced legislation that includes more than $23 billion for President Donald Trump’s border security agenda and numerous enforcement provisions aimed at cracking down on sanctuary cities and undocumented criminals, a proposal that could boost his bid to lead the House GOP after next month’s elections.

The California Republican introduced the bill on Friday after visiting the El Paso, Texas, sector of the southern border on Thursday.

The majority leader said he was “awed by the magnitude of the border and the bravery of the officers who patrol it.”

“I also came away with greater conviction of the need to support these officers by giving them the resources they need: More agents, technology, and most importantly the Wall,” McCarthy said in a news release.

Specifically, the legislation text includes $16.6 billion for wall construction and $6.8 billion for infrastructure and technology improvements for the Border Patrol.

It also includes several smaller Republican immigration proposals, many of which have already passed the House. Among them are provisions drawn from a bill that would raise mandatory minimum penalties for undocumented immigrants who repeatedly cross the border and others taken from legislation to strip funding from “sanctuary cities.”

McCarthy’s bill does not include a provision to legalize so-called Dreamers, young undocumented immigrants brought to the country as children, or to help reunite migrant parents who remain separated from their children because of the Trump administration’s “zero tolerance” border security policy.

It’s unclear if or when the House might vote on McCarthy’s bill. Even if it passes, the proposal would almost certainly stall in the Senate, where Democrats who oppose the border wall and support a path to legal status for Dreamers can block any legislation requiring 60 votes to pass.

Politically, it could excite Republican voters ahead of the midterm elections next month. It also signals to GOP lawmakers in Congress that McCarthy supports a hard line on immigration.

McCarthy is one of the Republicans vying to lead the GOP conference next year as speaker or minority leader following the retirement of Speaker Paul D. Ryan, R-Wis. Rep. Jim Jordan of Ohio is also in contention and Majority Whip Steve Scalise of Louisiana has expressed interest if McCarthy falters.

President Trump wants funding for the border wall to be a post-election priority for Republican lawmakers, and has repeatedly said he would shut down the government if Congress doesn’t approve it.

Both McCarthy’s bill and the House’s fiscal 2019 Homeland Security appropriations bill, which was approved in committee this summer but tabled until after the midterms, would appropriate $5 billion for border barriers in the current spending cycle, while the Senate’s more bipartisan bill would approve $1.6 billion — the amount the Trump administration’s budget requested.

Senate Majority Leader Mitch McConnell, R-Ky., told the Washington Examiner on Thursday he’s planning to seek $5 billion for the wall after the elections.

Senate appropriators from both parties are skeptical, however, of McCarthy’s legislation.

“They ought to have a straight up-or-down vote on it,” said Sen. Patrick J. Leahy, D-Vt., the Senate Appropriations Committee ranking member. “I believe even today in the Republican-controlled House and Senate, it would not pass.”

Senate Appropriations Chairman Richard C. Shelby, R-Ala., said he would want to read the legislation before making a final decision, but noted that appropriators are still trying to work out differences between the House and Senate Homeland Security spending bills.

“I’m not against the wall. I just hope what we do is wise — you know, the way we spend our money,” Shelby said, noting that he expects a “big fight” during the lame duck “because of the different views” on border wall spending.