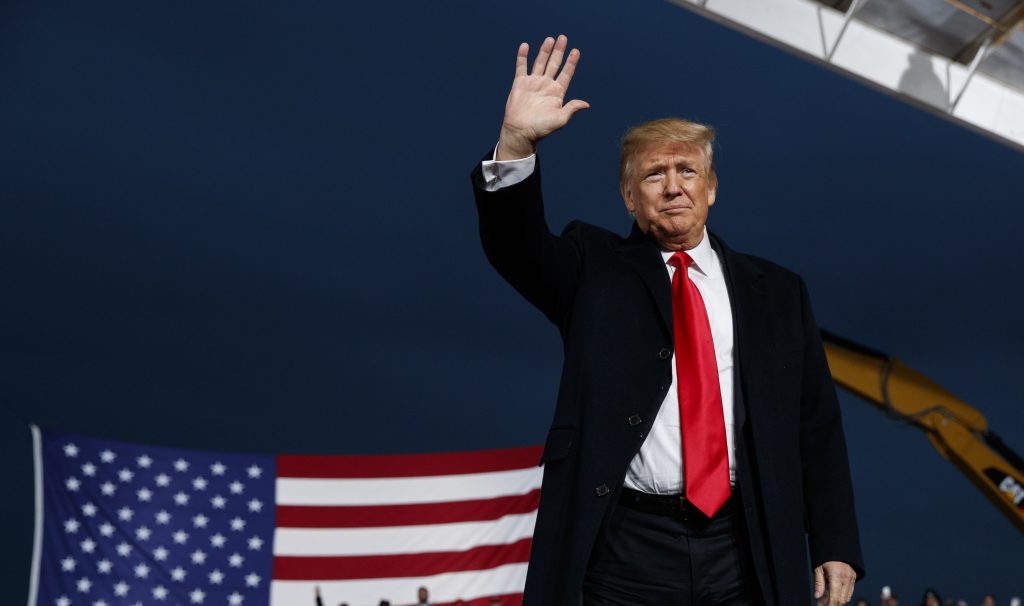 President Donald Trump gazes out over his rally crowd and lets loose a stream of insults with a theatrical flourish and playful grin. He jabs at Cory Booker the “disaster” mayor, Elizabeth Warren the “Pocahontas” pretender and “sleepy” Joe Biden.

“I want to be careful,” Trump tells the crowd, feigning a confession. He doesn’t want to hit his potential challengers too badly, he says, because then the Democrats may find “somebody that’s actually good to run against me. That would not be good.”

The venue may be Council Bluffs, Iowa, or Erie, Pennsylvania, or Topeka, Kansas, but the formula is largely the same.

Start with a few derisive nicknames, mix in some dreamy-eyed reminiscences of Election Night 2016, spice things up with an unexpected quip or zinger out of left field and you’ve got Trump’s recipe for a successful campaign rally.

Trump’s rallies once were the cornerstone of an unconventional, star-powered presidential campaign that eschewed traditional organizing and defied every expectation. Now they’re being deployed with gusto as Trump and his team work frantically to defy polls and precedent and save his Republican majority in Congress in November’s midterm elections.

“Look at this,” says Brenda McDonald, 58, of Woodbury, Minnesota, gesturing to the thousands of people standing ahead of and behind her in a line that wound around buildings and snaked through alleys for at least a mile when Trump’s rally tour stopped in her state on Oct. 4.

“Have you ever seen rallies like this before?” she asked.

Trump has been aggressively campaigning across the county to try to boost vulnerable Republicans before the Nov. 6 elections, when the stakes couldn’t be higher. A Democratic takeover of Congress would stymie his agenda and mire his administration in endless investigations, including possible impeachment proceedings. Trump’s team believes his appearances fire up his loyal base, countering the wave of Democratic enthusiasm that polls suggest will lead to significant Democratic gains, especially in the House.

But after more than 350 rallies since he first began his presidential run, some things have changed.

Trump’s supporters remain as enthusiastic as ever, standing for hours in hot sun or driving rain and exploding into thundering applause when he takes the stage. They wave the same signs, wear the same hats, and chant the same “Build that wall!” and “Lock her up!” refrains that they did during the early days of Trump’s campaign.

But the once insurgent candidate, who told his supporters the system was rigged against them, is now president. And he’s been delivering on many of his campaign promises, in spite of lackluster approval ratings.

Trump’s 2016 rallies had the feel of angry, raucous, grievance sessions, as Trump’s “deplorables” gathered in the face of charges they were racist, bigoted and could never win. Gone now is the darkness, the crackling energy, the fear of potential violence as supporters and protesters faced off, sometimes trading blows. The mood now is calmer, happier, more celebratory. Trump’s rallies have gone mainstream, complete with a new playlist.

Trump’s campaign, which was notably stingy during his own election effort, has been investing heavily in his recent tour, covering all the costs of organizing and paying for the rallies, including footing the Air Force One bills, according to the campaign.

“Of course, President Trump’s favorite way to connect with and charge up voters is with rallies hosted by the Trump Campaign,” the campaign said in a statement.

And they believe the money is well spent.

Trump’s events often dominate local news for days. Trump’s rally in Johnson City, Tennessee, for instance, earned more than $270,000 worth of local media coverage that night and the morning after, according to data compiled by a media tracking company and shared by GOP officials. That’s not counting front-page stories in local papers and coverage when the rally was announced.

The Republican Party has been sending cameras to the rallies, so they can quickly post footage that can be spliced into ads.

But while the rallies are about boosting GOP candidates, they’re also always about Trump, who has been using them to test-drive messaging for his 2020 campaign.

At rally after rally, Trump has cycled through a short list of buzzed-about potential rivals, labeling each with a derisive nickname, just as he did when he cleared the unwieldly Republican field in 2016.

The insults have been among Trump’s biggest applause lines in recent days, along with his attacks on Democrats for their treatment of his Supreme Court nominee, Brett Kavanaugh, as the Senate investigated allegations against Kavanaugh.

Trump’s crowds seem most entertained when he veers into offensive, “politically incorrect” territory. He’s bragged about how easily he could pummel Biden, the former vice president, or Booker, the New Jersey senator and former Newark mayor, or Warren, the Massachusetts senator whom Trump denigrates for her claims of Native American heritage.

Those moments add spontaneity and a tinge of sinister mischief that keep Trump’s speeches interesting, even as they grow increasingly formulaic.

Indeed, the rallies, at times, take on the feel of a high school reunion, with Trump taking the role of star football player, reliving his glory days, play by play.

The risk, as he prepares for the 2020 campaign, is whether Trump’s supporters will tire of the shtick.

They say it won’t happen.

Person after person pointed to the crowd as evidence Trump was generating enthusiasm for GOP candidates even though he’s not on the ballot.