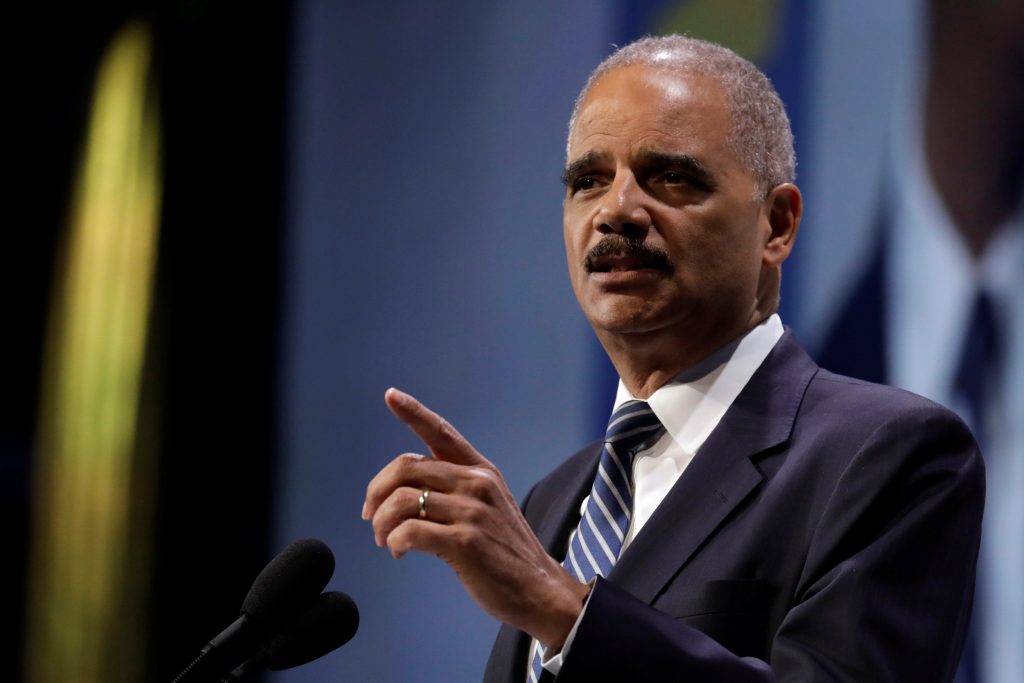 In multiple interviews, Abrams dismissed Holder’s comment that Democrats should “kick ’em” when Republicans “go low,” a recasting of Michelle Obama’s 2016 slogan, “When they go low, we go high.”

“I think there’s a hyperbolic moment that happens in every campaign,” Abrams said on NBC News’ “Meet the Press.”

“Hyperbole in elections can be very difficult,” she said on CNN.

Holder, who has said he was speaking figuratively, made the comment this month while campaigning for Abrams in McDonough, Georgia. The remark has become a flash point ahead of an election in which Republicans are seeking to galvanize their voters by painting Democrats as an “angry mob.”

“I am not a great fan of being rude or disrupting activities,” Sanders said on CNN, a reference to recent episodes in which liberal protesters interrupted Republican leaders’ meals in restaurants. He called for people frustrated by the current political order to help turn out voters in November.

“The issue is not quote-unquote ‘mobs,’ ” he said on ABC News. “In my view, what this whole election will come down to is whether we can mobilize people to come out and vote.”

Sanders declined to say when he might make a decision on whether to run for president in 2020 and, in response to a question about impeaching President Donald Trump, said Democrats should focus on the midterms.

In one example of the GOP message, Republican Senate candidate Josh Hawley in Missouri predicted that voters in his state would be galvanized by Democrats’ “mob behavior” during the recent confirmation process for Supreme Court Justice Brett Kavanaugh.

“What the Senate Democrats did in that case is hugely motivating to Missouri voters,” Hawley said on NBC. “They cannot believe the conduct of these Senate Democrats. They can’t believe … this mob behavior that we’re seeing all over the country. It is motivating folks.”

Hawley, who is challenging incumbent Sen. Claire McCaskill, D, added that “the future of our country is at stake” in the midterms.

“You can see it in what we’re seeing out on the streets now,” he said.

Abrams, who is running in a hotly contested race against Georgia Secretary of State Brian Kemp, described her approach to campaigning as consistent and levelheaded.

“I didn’t blow things up, I didn’t point weapons at people, I didn’t threaten to round people up in my truck,” she said on CNN.

The comment referred to Kemp media ads that featured him pointing a shotgun at a teenage boy, an explosion and a shot of him climbing into a pickup “just in case I need to round up criminal illegals.”

“I don’t point shotguns at people in my commercials to try to create histrionics,” Abrams said on NBC. Kemp has pitched himself to voters as a “politically incorrect conservative.”

Abrams also criticized efforts by Kemp and Republicans to crack down on alleged voter fraud in Georgia, saying the “exact match” program disproportionately affects women and people of color.

“It’s part of a pattern of behavior where he tries to tilt the playing field in his favor or in the favor of his party,” she said.