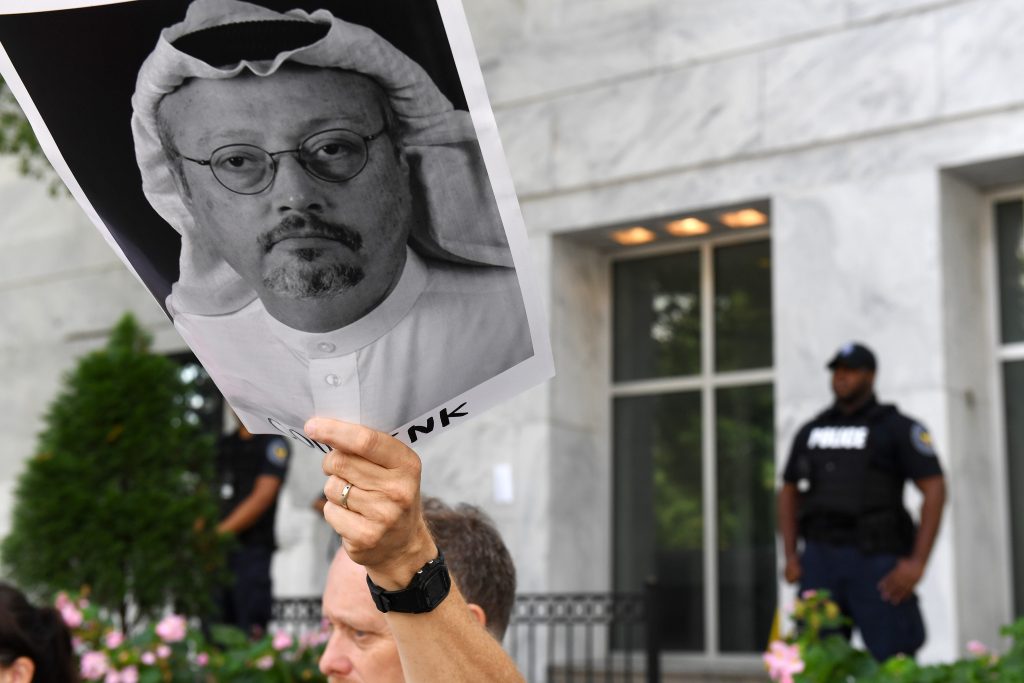 In excerpts of a new interview released Saturday morning, Trump said that the incident is being investigated and that the Saudis deny any involvement, despite the mounting evidence that the Saudi regime was implicated in Khashoggi’s disappearance on Oct. 2.

“Well, nobody knows yet, but we’ll probably be able to find out,” Trump said in the interview with Lesley Stahl of CBS’s “60 Minutes,” which will air in full Sunday night. “It’s being investigated, it’s being looked at very, very strongly. And we would be very upset and angry if that were the case. As of this moment, they deny it, and they deny it vehemently. Could it be them? Yes.”

Trump added, “We’re going to get to the bottom of it, and there will be severe punishment.”

Turkish authorities say a team of Saudis killed Khashoggi, and U.S. intelligence intercepts show Saudi officials discussing an operation to lure Khashoggi – a Saudi citizen who had been living in the United States – back to Saudi Arabia from his home in Virginia and detain him.

Speaking with reporters at the White House later Saturday, Trump reiterated that there would be “very powerful” repercussions for Saudi Arabia should the United States determine that the kingdom is responsible for the death of Khashoggi, who wrote for The Post’s Global Opinions section.

But the president all but ruled out canceling $110 billion in U.S. arms sales to Saudi Arabia, arguing that doing so would be “very foolish for our country” and only end up harming U.S. defense industries and others.

Trump said the United States competed against China, Russia and other countries for the Saudi contracts and winning it was “a tremendous order for our companies.”

“I actually think we’d be punishing ourselves if we did that,” Trump told reporters, referring to canceling the arms deal. “There are other things we could do that are very, very powerful, very strong, and we’ll do that.”

Trump declined to provide an example of an action he was considering taking to punish Saudi Arabia, saying only that “there are many things we could do.”

Trump made his comments during an Oval Office meeting with evangelical Christian pastor Andrew Brunson, who returned Saturday from Turkey where he had been imprisoned for nearly two years.

Trump said he plans to review recordings from the Turkish government that purport to show evidence of Khashoggi’s killing.

Asked whether he had reviewed the audio or video recordings, Trump said he has not. He then turned to Secretary of State Mike Pompeo to ask if he had seen them, to which the top diplomat replied, “Mr. President, I have not seen it.”

“We’ve all heard a lot about the audio,” Trump said. “Nobody’s seen it yet. We do want to see it.” The president confirmed that he had asked the Turkish government to share the recordings and added, “We’re going to be seeing it very soon.”

Trump said he would be calling King Salman of Saudi Arabia later Saturday or early Sunday to discuss the Khashoggi matter.

Trump said that he had invited Khashoggi’s fiancee, Hatice Cengiz, to visit him at the White House and that his staff was working out arrangements with her. The president said that Cengiz wrote “a beautiful letter” to him and first lady Melania Trump and that they would welcome her.

“It’s looking like he perhaps won’t be or isn’t around and that’s very sad,” Trump said of Khashoggi. “I think we would’ve known by now. That was our first hope. Our first hope was that he was not killed, but maybe that’s not looking too good.”

The Saudi government issued a statement Saturday morning condemning and denouncing “the false accusations circulated in media reports on the Saudi government and other people in the purported relation to the disappearance” of Khashoggi.

The statement said Saudi’s interior minister, Prince Abdulaziz bin Saud bin Naif bin Abdulaziz, “stressed that what has been circulating in terms of supposed orders to kill Jamal are outright lies and baseless allegations against the Kingdom’s government, which is committed to its principles, rules and traditions and is in compliance with international laws and conventions.”

The minister went on to praise a joint investigation with Turkey and said the kingdom wants to “clarify the whole truth” about Khashoggi’s disappearance.

The statement offered no new details from the kingdom, which has steadfastly claimed it had no role in Khashoggi’s disappearance. But the careful wording appeared to leave open the possibility that Khashoggi died or was killed during an attempt to detain him, as some have speculated.

In London, Turkey’s foreign minister, Mevlut Cavusoglu, said that Turkish and Saudi officials have been talking, but that Saudi Arabia had not yet allowed Turkish prosecutors and investigators to examine inside the consulate.

“We haven’t seen any collaboration on this issue,” he said. “Officials need to work with us on this.”

“They deny it,” Trump said. “They deny it every way you can imagine. In the not too distant future, I think we’ll know an answer.”

Stahl asked Trump about his options to retaliate against the Saudis, including possibly imposing economic sanctions against the oil-rich desert kingdom, as a bipartisan group of senators has proposed.

“Well, it depends on what the sanction is,” Trump replied. “I’ll give you an example. They are ordering military equipment. Everybody in the world wanted that order. Russia wanted it, China wanted it, we wanted it. We got it, and we got all of it, every bit of it.”

Asked if he would cancel the arms sales, Trump hesitated.

“Well, I’ll tell you what I don’t want to do,” he said. “Boeing, Lockheed, Raytheon, I don’t want to hurt jobs. I don’t want to lose an order like that. And you know what, there are other ways of punishing, to use a word that’s a pretty harsh word, but it’s true.”

The president added, “There’s a lot at stake. And, maybe especially so because this man was a reporter. There’s something – you’ll be surprised to hear me say that, there’s something really terrible and disgusting about that if that was the case so we’re going to have to see.”